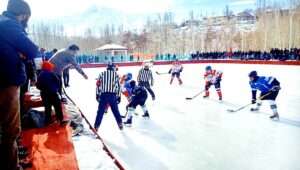 During the meeting, the members laid the emphasis on the promotion of winter sports especially Ice Hockey in Jammu and Kashmir.

The general body also confirmed the elected members of the new unit with Dr S.M Bali as President and Ajaz Rasool Mir as General Secretary of Ice Hockey Association for Jammu and Kashmir.
The house authorised the Dr Bali to nominate rest of the office bearers and executive committee members with in a week’s time.

It was unanimously decided to host the 10th IHAI National Championship for Men at the Ice Hockey Rink in Gulmarg. Dr Bali along with Harjinder Singh, Ajaz Rasool Mir and Waseem Raja Khan visited the Rink at Gulmarg for an on the spot assessment of the facility to host the sport at National level. IHAI also decided to conduct UT level coaching camp for boys and girls prior to the national championship at Gulmarg.
Harjinder also shared the past success of Indian National Team of Ice Hockey with the house.
He stated that Indian men’s team got a silver medal in the IIHF Challenge Cup of Asia (Div -1) at Kuwait in 2017 and women’s team won a bronze in the IIHF Challenge Cup of Asia ( Div-1) at Abu Dhabi in 2019.
With the focus of the Government of India on winter sports through 1st Khelo India Winter Games Meet recently held at Gulmarg, Singh laid emphasis on competent management for developing the sport and felt that the new body will deliver to their expectations.

The 10th Nationals at Gulmarg in 2021 would give right impetus to develop this Winter Olympic Sport in the region and also give a spurt to Sports tourism in the Region, he said.
He thanked Kiren Rijiju, Minister of State for Youth Affairs and Sports, for initiating Khelo India Winter Games.