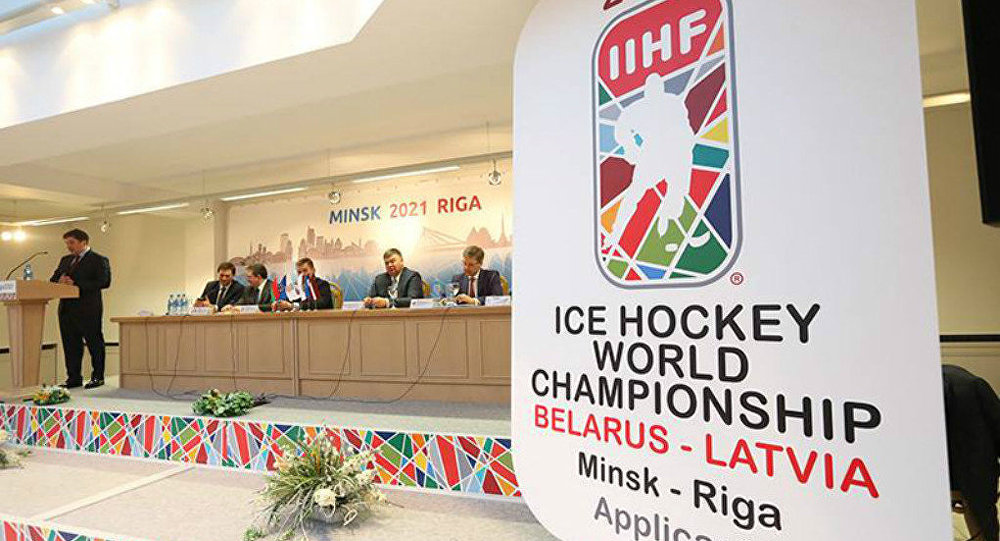 After a tight race between two strong applicants the 2017 IIHF Annual Congress allocated the 2021 IIHF Ice Hockey World Championship to the joint bid of Minsk, Belarus, and Riga, Latvia.

The joint bid of the two neighbouring countries won by a tight margin against the Finnish bid with the cities of Tampere and Helsinki. The proposed dates are 7-23 May 2021.

The two countries decided a few months to join together for the bid with the slogan “Passion. No Borders” that seeks to show a good relationship between a country in and another outside of the European Union, which they symbolically did at yesterday’s presentation with a video sequence from a space shuttle, and without borders. And it emphasized that the passion of the hockey fans from both countries is well known despite the fact that the two countries are neither among the biggest ones in population in Europe nor among the very top nations in the World Ranking. Belarus will be ranked 10th in the new IIHF World Ranking, Latvia 12th.

Minsk is the Belarusian capital, with almost two million inhabitants and 3.4 million in the region. In 2014 it broke the World Championship attendance record that was reclaimed by the Czechs in 2015. For 2021 the 15,086-seat Minsk Arena, with two practice rinks on site, would be used as the primary venue.

Minsk is the cultural centre of Belarus with numerous events and activities. The bid presentation recalled the great atmosphere of 2014, with its downtown fan village and fan zone as well as the convenience of Minsk Arena being just 15 minutes from the city center and the airport.

Riga, Latvia’s capital, is just a one-hour flight away. It has 640,000 inhabitants and 1.4 million people living in a 100-kilometre radius. Latvia is renowned for its passionate fans traveling to World Championships all around the world, and the country hopes to recreate the great atmosphere of 2006 when the 10,300-seat Arena Riga was opened to host the Worlds. And they promise that a new practice arena will be built next to it.

“I truly believe in a Europe with no borders and with passion. It would be a fantastic experience to show that Europe is about passion, not about borders. I truly believe in social responsibility. And that also means the prices for fans. They will not have to pay a lot. It’s just €2.20 for a beer and in Minsk it’s even cheaper,” said Riga Mayor Nils Usakovs in his speech. And Minsk Mayor Andrei Shorets added that in Minsk it’s even less, just one euro.

New LHF President Aigars Kalvitis remembers the 2006 Worlds in Riga well. At that time he was the Prime Minister.

“Hockey is loved so much in our country and we are thankful that our Belarusians friends invited us. In Cologne we had at least 7,000 to 8,000 Latvian fans who supported the team. We hope with this championship we will develop hockey in the region,” he said.

Both arenas were opened to host the first-ever World Championship in each county, the Arena Riga for the 2006 Worlds and the Minsk Arena for the 2014 edition. The two venues also hosted the Final Olympic Qualification stages in 2016 as well as World Championships in the U20, U18 and women’s categories and the IIHF Continental Cup. They are currently mainly used by the local KHL teams, Dynamo Minsk and Dinamo Riga. Dynamo Minsk has the highest attendance in the KHL and the second best in Europe.

“Ice hockey is number one in our countries. You would give us the biggest honour possible and the greatest event our countries can host,” said IIHF Council Member and BIHA Vice President Sergej Gontcharov.