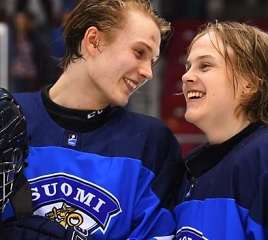 The World Junior Summer Showcase returned to Plymouth, Michigan after a year in Victoria, British Columbia, and the 18th edition of this August congregation of U20 players produced many meaningful results for the four participating teams – United States, Canada, Finland, Sweden – all of whom hope to win gold at the 2020 IIHF World Junior Championship in the Czech Republic.

In all, 12 games were played over the last week. The Americans started with a split squad (Blue and White), and Canada brought a healthy number of additional bodies over and above the 20 required for a game.

More than that, however, the quality of the teams was nothing short of sensational. There were 101 players who had been drafted in either 2018 (56) or 2019 (45), and an additional 19 players who are draft eligible in 2020, notably number-one ranked prospect Alexis Lafreniere of Canada.

Impressively, all 31 NHL teams had at least one player at the event while leading the way the L.A. Kings had seven and Carolina six. Of these draft choices, 29 were first rounders. Notable names included 2019 selections Kirby Dach (CAN), the 3rd overall selection this past June; Bowen Byram (CAN), 4th; Alex Turcotte (USA), 5th; Philip Broberg (SWE), 8th; and, Trevor Zegras (USA), 9th.

Scouts were aplenty in the arena, looking both at their own selections from the previous two years as well as assessing available talent for 2020. In addition to Lafreniere, many 17- and 18-year-olds made a good impression. Two of the top players who will almost certainly be playing at the 2020 U20 in anticipation of next year’s draft are Swedes Alexander Holtz and Lucas Raymond. Both were sensational for their team during last season’s gold-medal run at the U18, and they continued to impress coach Tomas Monten in Plymouth.

The Finns had the greatest number of draft eligible players (11) yet, despite their team youth, made a favourable impression on coach Raimo Helminen. “I’m happy with how we played here,” he offered. “The whole group played well, at a really good speed. They have a lot to learn, of course, but they all do.”

The point of this event has always been the same – to give coaches and players some experience heading into a new season, and to prepare for the upcoming World Junior Championship (being played in Ostrava and Trinec, Czech Republic during the coming Christmas/New Year’s holiday).

To that end, it’s not about winning or losing that counts so much at this event as it is the coaches getting to know the players off ice and the players showing something of their character. The intensity level is nowhere near what it will be at the teams’ U20 camps in December, but players still have to show dedication to the team as well as some skills on ice.

What did we learn? Who can we admire from the Summer Showcase? Well, the hosts gave everyone several good performances, starting with Cole Caufield. Not the biggest player around, the Montreal Canadiens draft choice showed tremendous skill and puck sense around the net.

Teammate Arthur Kaliyev scored four goals and displayed a shot that is without question the best one-timer in the world not in the NHL. Joel Farabee (Philadelphia) and John Beecher (Boston) also impressed coach Scott Sandelin.

Sweden won twice and lost three times, scoring only 12 goals and allowing 19, but Monten was pleased with several players, including the aforementioned Holtz and Raymond. On the final day, Kings’ draft choice Samuel Fagemo had a hat trick in his team’s 6-3 win over Finland.

The Finns won three of their five games and despite their youth took many fine impressions home. Sampo Ranta scored four times in five games and was a dominating presence. At 6’2” (188cm) and 190 lbs. (86kg), he was a big body with plenty of skill, something the Colorado Avalanche liked enough to select him 78th overall in 2018. He plays for the University of Minnesota in NCAA Division I.

Lassi Thomson, 19th overall by Ottawa in 2019, was the top draft choice playing for the Finns and defenceman Anttoni Honka (Carolina, 83rd overall, 2019) was perhaps the team’s best blueliner.

A number of Canadians proved they are players to watch as their NHL dreams unfold, starting with Nolan Foote, son of Adam. Drafted by Tampa Bay in the lirst round juts a few weeks ago, he is a big and strong forward who has great skill around the goal. Defenceman Braden Schneider, draft eligible next year, also made a great impression, as did Byram and another forward, Connor McMichael (25th by Washington in 2019).

The hitting wasn’t there. The goal celebrations were muted. It was summer, when most teenagers are lying on a beach or throwing a frisbee. But for these young talents who hope to play at the upcoming World Juniors, hope to take their draft selection to an NHL career, this was an important stepping stone. Careers won’t be made or lost based on what happened in Plymouth, but any chance they can get to play world-class competition, they know they have to take it.