Kakko aims to win for Finns 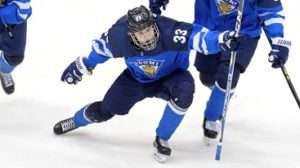 Kaapo Kakko celebrates a goal with his Finnish teammates during the 2018 IIHF Ice Hockey U18 World Championship.

For the past several years now, the Finnish rosters at the IIHF World Junior Championships have featured players projected to be among the top few picks at the upcoming NHL Entry Draft. In 2015 it was Mikko Rantanen, in 2016 it was Patrik Laine, in 2017 it was Miro Heiskanen and in 2018 it was Jesperi Kotkaniemi. Now, in 2019 it’s right winger Kaapo Kakko.

Kakko plays for TPS Turku in the Finnish Liiga, where he’s having a fine rookie season. He got his first taste of the pros last season with a six-game stint as a 16-year-old. This season, he has been more productive with 18 points (7+11) in 26 games, which puts him fourth in team scoring and third in the league among junior-aged players behind Aleksi Heponiemi and Rasmus Kupari.

“It’s a high-level league,” Kakko said of the Liiga. “I think this year I have more strength and power, so I can play my game a little bit better.”

Going into greater detail about his game, Kakko said: “I think my strengths are my offensive game and my hockey sense, finding players and making plays. I need to improve more on the defensive side of the puck.”

At 17 years of age, it’s hardly a surprise Kakko is the youngest player on his team by a couple of years. He considers himself fortunate to have received good guidance from some of the leaders on the team, particularly team scoring leader Ilari Filppula and captain Lauri Korpikoski. Unfortunately, Korpikoski has yet to play this season as, in September, he was diagnosed with myocarditis – an inflammation of the heart muscle caused by a virus, which can be fatal in serious cases. As scary as that sounds, Kakko is optimistic about the outlook.

“It will be a few more games,” he said about the timing of Korpikoski’s return. “Fortunately, the team has managed to play pretty well and we should be even better when he returns.”

Like the other Finnish prospects who came before him, he’s also had a fair bit of success on the international stage. Last season, he had 10 points in seven games at the U18 World Championship in Russia, helping Finland to the gold medal.

Kakko doesn’t find it much of an adjustment moving back and forth between the pro game and top-tier international junior hockey.

“Both are high-tempo,” he compared. “When you get these top teams from the world, top-level junior hockey is almost like professional-level hockey – it’s not that different. Both have a lot of good players.”

In his first taste of U20 international hockey this season, he doesn’t look out of place on a Finnish team that looks poised for more success. Bringing a young roster to a tournament in the Czech Republic in November, the Finns dominated Russia, Sweden and the Czech Republic, outscoring them 16-5, en route to a first-place finish. Kakko himself had three points in three games.

“Of course we’re happy, but we’re not very surprised,” Kakko said confidently. “We have a lot of good 2001-born players in our country, so I think we can play against anybody,” he said of a group that includes himself, Anton Lundell and defenceman Mikko Kokkonen, who could all play in the upcoming World Juniors and a second U18 World Championship in April.

Projected as one of the top picks for next summer’s NHL Entry Draft, Kakko is already been compared to Jack Hughes, the American whose name is at the top of many lists.

“I know who he is, obviously,” Kakko said of Hughes. “I know he’s a good player and he’s always been ranked No. 1 in the draft rankings, but that’s all I really know about him.”

Kakko and Hughes faced each other in the gold medal game of last year’s U18 World Championship and will likely meet again on New Year’s Eve in Victoria, when Finland and the USA play Group B’s final game. However, Kakko denied any personal rivalry.

On the draft, Kakko said: “Of course, I want to get picked as high as possible, but I don’t want to think too much about it because it’s a long way from now. It doesn’t really make any difference in how I play this season. Every year, I just want to be the best hockey player I can be, draft or no draft.”

Bringing focus back to his teams, Kakko said: “On the international stage, winning the World Junior Championship is my main goal. At the club level, I want to play as well as I can and help TPS win.”

While some young Finns, such as former TPS teammate Olli Juolevi and a few of the hopefuls for this year’s junior national team, opted to go overseas at a young age, Kakko has opted to stay the course at home.