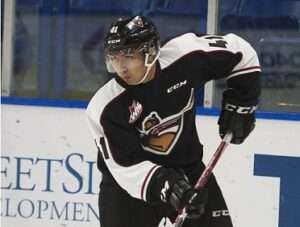 Alex Kannok Leipert, who was born in Thailand but lives in Regina, is the latest player from the Regina area to be drafted by the Washington Capitals.

It’s believed that the 17-year-old defenceman became the first Thai-born player to be selected in the NHL draft when he was chosen by the Washington Capitals, who traded up to pick him in the sixth round (161st overall).

It’s quite an accomplishment for the youngster, who gravitated to hockey after he moved to Regina at age five.

“I saw something (online) saying I was the first one,” said Kannok Leipert, a member of the WHL’s Vancouver Giants. “I’ve asked around a little bit but I haven’t heard anything (suggesting otherwise). It’s pretty cool. If I didn’t move to Canada it wouldn’t be this way.

“The outpouring of support has been unreal. I just want to thank everyone who has helped get me to this position.”

Although Thailand is not a traditional hockey market, the sport has grown in popularity over the past few years. It now features at least two competitive leagues as well as a national men’s team and women’s team that compete in lower level international competitions like the Asian Games.

“They’re starting to pick up hockey a lot so it’s pretty cool,” said Kannok Leipert, who visits family in Thailand every couple of years. “I went and practised with their international team last summer. It’s getting pretty big there now. They’re starting to put up rinks and things like that.”

Kannok Leipert has built an impressive resume of his own.

He served as captain of the midget AAA Regina Pat Canadians when they won a provincial title in 2017 and finished fourth at the Telus Cup national championship. That same year, Kannok Leipert was named the top defenceman in the Saskatchewan midget AAA league and a first team all-star.

He joined the WHL’s Giants last season and enjoyed a strong rookie campaign, recording five goals and 21 points in 60 games.

“I thought the season went well and I was hoping for the best,” said Kannok Leipert, who noted that the Capitals showed “the most interest by far” prior to the draft. “I came to the realization that if it didn’t happen it would be Ok but if it happened it would be awesome. I just waited to see and it was a nice surprise.”

It wasn’t a surprise to Pat Canadians head coach Darrin McKechnie, who had been approached about Kannok Leipert by Capitals assistant GM Ross Mahoney and scout Darrell Baumgartner. Both men are based in Regina and have a history of drafting local players, including Garrett Mitchell, Connor Hobbs, Colby Williams and Chandler Stephenson.

“They got a good one (in Kannok Leipert),” noted McKechnie. “I talked to them a couple of times. They liked him early in the year so I was so excited that he could be a Washington draft pick.”

McKechnie can’t say enough good things about Kannok Leipert, calling him a natural leader and “a terrific young man.” He also believes there’s potential for him to enjoy a long pro career.

“He really works hard at his game,” said McKechnie, a former coach and player with the WHL’s Regina Pats. “He treats everybody so well and he leads by example. All the great qualities that you want in a young man and a hockey player, he’s got it. I think before his junior career is done he’ll be a captain. He’s just that type of kid. If he wants to put in the work, I think the NHL is there for him.”