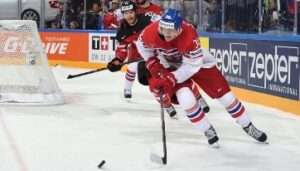 Three teams were in contention for top spot ahead of the final round of matches of the Karjala Tournament played in Helsinki. The Czechs were leading the pack with five points. Finland was breathing down their neck with four points while Russia had two points on board.

In the end, it was Milos Riha’s men who were worthy winners as they went undefeated throughout the tournament. The Czechs set the tone with a fine 3-1 opening day win against Sweden. Penalty shots downed the Finns 3-2 in their second game before blanking Russia 3-0 to claim their second Karjala Tournament win.

In their decider against Russia it was influential team captain Jan Kovar who put the Czechs ahead at 10:32. Lukas Sedlak scored his first international goal to double the lead with 8:56 left of the final frame before Andrej Nestrasil finished off the scoring 15 seconds before the end.

In their Karjala Tournament opener, the Czechs got off to a flying start in Swedish city Leksand where they took on Tre Kronor. Winning the shots 17-6 in a second period, Dmitrij Jaskin broke the deadlock assisted by the immense Jakub Krejcik after 24:48.

Despite Sweden’s Mikael Wikstrand tying the game in front of a crowd of 5,078, Kovar got the Czechs back into the lead on the power play, before Michal Repik hit the nail in the coffin with an empty netter.

Moving across the Baltic Sea to Finland, the Czechs continued their winning streak in Helsinki against reigning World Champions. The Czechs showed great determination when coming twice from behind with Tomas Filippi tying the game with around a minute left of ordinary time with Marek Langhamer pulled from the net. With the winner of the tight contest decided by penalty shots, it was Karpat Oulu’s blueliner Krejcik, who became the unexpected hero when converting for the Czechs.

Finland had opened the Karjala Tournament in jubilant mood, first with a banner raised to the rafters celebrating its World Championship win in May before defeating Russia thanks to Harri Pesonen’s 5-4 winner. Leijonat finished second in the competition following a morale-boosting final day win against neighbours Sweden, 2-1. Mikko Lehtonen opened the scoring in the first period, before Teemu Turunen fed Miro Aaltonen to convert on the powerplay in the second frame.

Russia finished third under new head coach Alexei Kudashov, while another assistant coach stepping up to the role as head coach, Johan Garpenlov will have to wait for his first win as Sweden finished fourth with a paltry point.