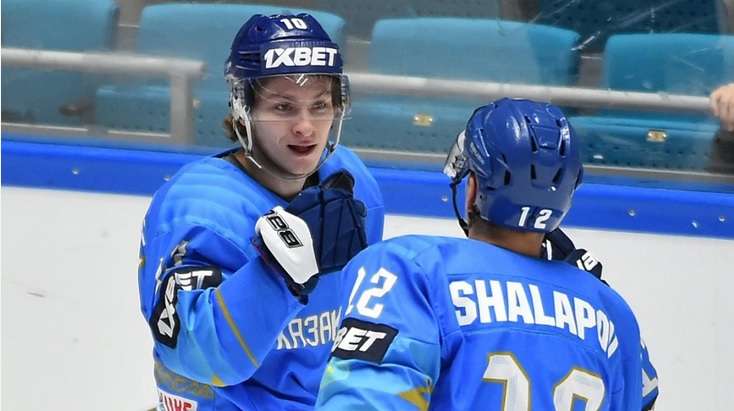 Nikita Mikhailis, the head coach’s son, was among the key players in leading Kazakhstan to promotion

There’s good news and bad news for Kazakhstan. The Eagles are back in the top division for the first time since 2016 and, in the absence of relegation this year, are certain to remain among the elite for the first time since its 2004-2006 run. However, the team’s preparations were disrupted when a member of the party tested positive for COVID after a warm-up game against Belarus, and Yuri Mikhailis’ roster has been hit by the withdrawals of forward Nigel Dawes and goalie Henrik Karlsson. While two prominent dual-nationals sit it out this year, the class of 2021 features several new faces, prompting hopes that the Central Asian country might be looking at a positive handover to a new generation.

Henrik Karlsson, Kazakhstan’s naturalized Swedish goalie, is unavailable for this year’s tournament. The 37-year-old was unable to agree an extension after five seasons with Barys Nur-Sultan in the KHL and does not wish to risk injury while he looks for a new contract elsewhere. Sergei Kudryavtsev, often Karlsson’s understudy for club and country, played just five games in 2020/21 and is not expected to be involved in Riga. No other Kazakh-eligible goalie featured in the KHL this term, so the door is open for the goaltending prospects learning their trade in Kazakhstan’s Pro Hokei Ligasy. Nikita Boyarkin, 22, recently backstopped Saryarka to that championship and got the nod for Kazakhstan’s warm-up game against Belarus on May 13. He did his hopes no harm with a shut-out in a 2-0 victory.

The contribution of several of Kazakhstan’s dual-nationals may be a matter for debate, but the performances of Darren Dietz are universally welcomed. Dietz, an Alberta native, joined Barys in 2017 with the unenviable task of filling Kevin Dallman’s skates. And the 27-year-old has delivered in fine style. A leader on and off the ice for club and country, he has also won favour with local fans for his willingness to engage with local culture, reciting Pushkin – in Russian – at the 2020 KHL All-Star Game and referencing the great Kazakh writer Abai during last year’s anniversary celebrations. At times, he can be poetry in motion on the ice as well, with an impressive record of 141 (50+91) points in 213 KHL games, plus 10 (3+7) in eight competitive games for the national team.

Dietz is joined by two other imports, Jesse Blacker and Viktor Svedberg. Blacker debuted for Kazakhstan in Olympic qualification in Feb. 2020, while former Chicago Blackhawk Svedberg is poised to make his first appearances for Kazakhstan this month. Previously the Gothenburg native played 10 exhibition games for Sweden but has since transferred his sporting citizenship.

There are no survivors from the 2016 roster this time as Kazakhstan looks to promote a new generation of players. Among the home-grown talent on display, there is excitement about Valeri Orekhov, a 21-year-old who has already established himself on the Barys roster in the KHL. Samat Daniyar, 22, makes his senior international debut after securing himself a place in the KHL, while 25-year-old Ivan Stepanenko of Beibarys is the only representative from the Pro Ligasy on the blue line.

Nikita Mikhailis, son of head coach Yuri, isn’t in the team just because Dad says so. Two years ago, the 25-year-old led the scoring as Kazakhstan won Division IA gold on home ice. Mikhailis potted 6 (4+2) points in five games there. He also cleared 30 points in his last three seasons with Barys, despite competing for ice time with the team’s imports. He’ll be expected to lead the offence in Riga, along with Kirill Panyukov, a 23-year-old who caught the eye in the recent KHL play-offs. The Astana-born left winger scored 7 (4+3) in six post season outings, reminding everyone of the potential that saw him captain Kazakhstan’s juniors in 2017 and earning himself a recall to the national team plus a move to KHL powerhouse Ak Bars Kazan.

Panyukov isn’t the only Kazakh forward heading to a big Russian club. Dmitri Shevchenko is set to join Gagarin Cup winner Avangard after four seasons with Barys. The 25-year-old centre isn’t a prolific scorer, but his physical presence – 195 cm, 101 kg – make him a formidable opponent on both sides of the puck.

In the past, Kazakhstan has called on several dual-national forwards – Dawes, most prominently, but also the likes of Brandon Bochenski and Dustin Boyd. This year, however, Curtis Valk is the only import on the forward line. The 28-year-old, whose solitary NHL appearance came for the Florida Panthers in 2017/18, made his international debut in last year’s Olympic Qualifying tournament and recently signed up for a fourth season with Barys.

Three players return from the previous team to represent Kazakhstan at this level: Roman Starchenko, Yevgeni Rymarev and Alexander Shin all played in Moscow in 2016. The latter is one of four players from Pro Ligasy to be in contention, along with Sayan Daniyar (Nomad Nur-Sultan), Artyom Likhotnikov and Kirill Savitski (both Torpedo Ust-Kamenogorsk).

Yuri Mikhailis takes charge of his country’s team for the first time at these championships. The 52-year-old spent most of his playing career on the blue line in his home town of Karaganda and had four seasons in the Russian top flight immediately after the break-up of the USSR. His coaching career began in 2007 with Barys-2 and he has worked almost exclusively within the Barys organisation since then. Mikhailis’ first international experience came in 2010 when he was an assistant coach for the U18s Division I campaign and he has since contributed at all levels, including the Asian Winter Games and the Universiade.

In 2014, Mikhailis was named head coach of Nomad Astana, the Barys farm club, and he led the team to the Kazakh title in 2017. This season was his first behind the bench in the KHL with Barys, where he led the team to the play-offs despite struggling with strict COVID restrictions in Kazakhstan and playing almost the entire season without spectators. Mikhailis admitted that stepping up to coach in the KHL and at international level represented a significant learning curve, but hopes that his team can make an impact in Riga.

“At one of our early meetings, I told the players that the national team won’t face the same pressure as usual,” he said in an interview with KHL.ru. “That’s liberating, and when we have the right to make mistakes, that can play into our hands. In every other season that Kazakhstan played in the elite division, there was always this big task to halt the elevator and preserve our status. Of course, that piled on the pressure, the guys often got nervous and risked burning out in some games. Now, though, everyone is preparing in a good mood, everyone is getting into shape and looking forward to it.”

Although Kazakhstan’s Minister of Sport and Culture, Aktoty Raimkulova, believes that Kazakhstan has every chance of following its promotion in 2019 by making the playoffs in Riga, few others share that optimism. An elevator team since 2006, the Kazakhs will be hoping that this season, in the absence of relegation, they can start to build a team capable of establishing itself in the top division for an extended period. Outperforming Italy will be regarded as a minimum target this time around, while signs of success against the likes of Norway, Latvia or Germany would be evidence of genuine progress.