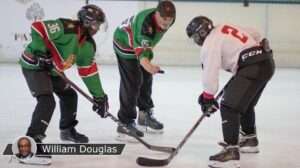 Program working toward IIHF membership, chance to play in Olympics.

The Kenya Ice Lions are ready to roar.

Almost two years after becoming social media sensations when the video of their game in Canada with Pittsburgh Penguins center Sidney Crosby and Colorado Avalanche center Nathan MacKinnon went viral, the Ice Lions feel they are ready to conquer the hockey world.

The next step for the Nairobi-based team with Olympic dreams is seeking membership in the International Ice Hockey Federation.

Ice Lions officials are in the process of forming the Kenya Federation of Ice Sports, a body that would be recognized by the Kenyan government to develop hockey, speedskating and figure skating. The federation would have the authority to apply for IIHF affiliate status for Kenya.

“We are very, very close to becoming a federation now,” said Tim Colby, a Canadian expat who is the Ice Lions’ general manager and coach. “We’re almost there. It’s a lot of bureaucratic hurdles. I’d say in a couple of months we’ll put in the application. We’ve already been in touch with the IIHF and they’re very eager to have us join as affiliates.”

If approved, Kenya would join Algeria, Morocco and South Africa as the only IIHF members on the continent. Egypt and Tunisia are also trying to join the 81-nation federation.

Kenya’s effort has been buoyed by the media attention from the Crosby-MacKinnon event, which was arranged by Tim Hortons, and by an ad from the China-based Alibaba Group that ran during the 2018 PyeongChang Olympics and featured the Ice Lions.

“I think the turning point is the Tim Hortons thing about two years ago, when they came back with full sets of gear,” said Jon Saunders, a former Miami University defenseman who shuttles between London and Nairobi and helps coach the Ice Lions. “With the coaching that had been done and some of the notoriety, things just picked up from there. The skill level, on a scale of one to 10, went from a two to about six or seven. Now it’s quite competitive; they’ve gotten really good.”

The spotlight bought the team fame — some Ice Lions traveled to PyeongChang for the 2018 Olympics — and some good fortune. Tim Hortons donated some much-needed new equipment to the Ice Lions along with about $22,500 that Colby said recently arrived in Nairobi.

North Park Hockey, a nonprofit youth team in New York, was so fascinated by the Ice Lions’ story after watching the Crosby-MacKinnon video that they adopted the team and donated about $10,000. The team is using the funds to renovate its locker room and pay for ice time at their small rink inside Nairobi’s Panari Hotel. The rink is the only indoor ice surface in Central and East Africa. Colby admits it’s not perfect — but it’s home.

“There’s an ice resurfacing machine, about half the size of a Volkswagen, and you can’t flood and scrape at the same time,” he said. “But the ice quality is good. We’re stuck with square corners, though.”

The rink and the hotel are near a national park where tourists can catch glimpses of leopards, cheetahs, and rhinos. But a growing number of hockey aficionados are coming to the region to see the Ice Lions. Hockey Hall of Famer Viacheslav Fetisov made the journey to play with the Kenyans in March 2019 as part of his project in partnership with the United Nations to highlight climate change. 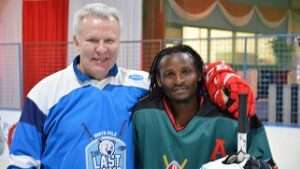 The contest, with Fetisov’s Last Game team, was the first international hockey game played in Kenya.

Bernie Saunders, who became the NHL’s fifth black player when he played 10 games for the Quebec Nordiques in 1979-80 and 1980-81, skated with the Ice Lions last year and watched his son coach.

“I think it was pretty cool for him,” said Jon Saunders, whose late uncle, John Saunders, was a hockey analyst and sportscaster for ABC and ESPN. “I don’t know what he was expecting to see going into it, but I think it meant a lot to him.”

Rick Lipsey, a North Park Hockey team manager and parent-coach, made the trek to Nairobi with his two sons to skate with the Kenyans and present them with an oversized check and bags full of hockey items donated by Pure Hockey, Howies Hockey Tape and Renfrew Pro, a maker of hockey tape.

“It was a great time and life-changing,” Lipsey, a former Sports Illustrated writer, said of the 4 1/2 days in Nairobi. “They actually are pretty good. They are not NHL or junior hockey level, but the kids can wheel and deal over there. Some of them could be really good hockey players given the opportunity.”

When Kirika Mugo, a resident of Washington, D.C., learned that his homeland had a hockey team, he couldn’t wait to take his son Austin to Nairobi in February 2019 to play with a team comprised of black players. The two enjoyed it so much that they made a return trip this February; Austin practiced with the team in one session that ran from 8 p.m. until nearly midnight.

“I felt proud because I don’t get to see that in the States,” said Austin, who played for Washington’s Alice Deal Middle School last season. “The majority of my teammates are white, so this was an experience.”

So how did hockey come to Kenya? Colby said some University of Manitoba students were in Nairobi on a research project in 2006 when they discovered that the city had an ice rink.

“They saw the ice and, being Canadian, they said, ‘Whoa!'” Colby said. “The next time they came back, they bought their equipment and started playing. And some guys, including one who is our team captain now, saw it and said, ‘Wow, this is crazy, I’ve got to try it. And it snowballed from there.”

The captain, Bernard Azegere, approached Colby and asked him if he’d like to coach the novice players. Colby was reluctant but eventually agreed.

Colby said the Kenyan hockey program has about 24 adults — including one woman — and 25 youth players. Lipsey said those numbers could grow if players from a vibrant roller hockey community in Nairobi make the transition to ice.

“There’s this big parking lot in downtown Nairobi where every Saturday and Sunday they skate for 4-8 hours and they get a few hundred people,” he said. “They just play roller hockey, rollerblading, they have races. That’s where their farm system is for the ice hockey. They take the kids who are able to get to the rink.”

“I’m watching kids who were so shy before, didn’t speak, do television interviews, international media,” Colby said. “Our one female player, Faith, she’s gone from nothing to everything as far as confidence goes. Sports is a great tool for that.”