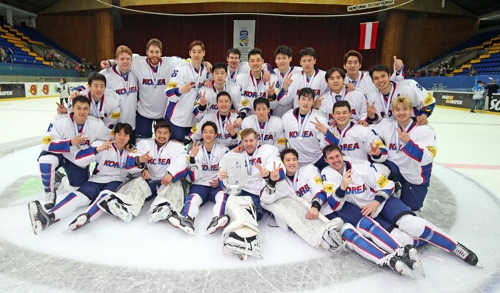 It will be the first time in history that the host of the 2018 Olympics will play in the top division of the IIHF Ice Hockey World Championship next year in Copenhagen and Herning, Denmark, where they will be joined by tournament winner Austria.

“The first and second periods were a little tough but we did our best and skated hard so we could get out with a good result. Now we will be focusing on the top division and will do our best to stay there,” Sanghoon Shin said.

It will be the first time for an Asian team to play in the top division since Japan between 1998 and 2004 when the Asian qualifier had a spot. Korea overtook Japan as the top-ranked Asian nation for the first time in 2016.

“It was a very exciting game until the last shot. The Ukrainian players played extremely hard, they blocked shots, they’re physical, they have individual skill. Their goalie was outstanding all tournament. They took us all the way to the shootout,” Korea head coach Jim Paek said.

Kazakhstan finishes the tournament in third place ahead of Poland, Hungary and Ukraine. The host earned its first and only point tonight but will be relegated.

“You want to come in and win every game. We played five games. We started the tournament 3-0; then Austria set us back. It was pretty tough today. Ukraine is a top team. They’re good to play against. We knew [if] we win we’re going up so that was in the back of the mind all game. It put a lot more pressure on the guys but we came through. It was a nail-biter but it was fun for the fans,” said Michael Swift, who was credited with the game-winning goal after opening the shootout with a marker.

“The next 12 months that are coming up will be something very special for Korean ice hockey. They’ve never been to the top [division]. We’re there now and we want to stay there. We’ve got a lot of work to do.”

Korea out shot Ukraine 36-23 during the 65 minutes of play but did too little with its opportunities.

Korea had more opportunities in a scoreless first period also during two power plays and eventually opened the scoring at 4:59 of the middle frame.

Shangwoo Shin got the time and space to patiently wait on the right side of the Ukrainian net before sending a pass to Jin Hui Ahn to the left, who gave Korean the lead. However, Ukraine stepped up in the period and was rewarded.

Sergi Babynets took Korea goalie Matt Dalton the puck away behind the net, skated back and put the puck in to tie the game.

“Our team was doing the best, sometimes even more than they could. There’s of course always the desire to do something magic but it’s not always possible,” Ukraine head coach Olexander Savitsky said after the game. “We have youngsters with good potential and hopefully in the next championship they will be good.”

There were several hot moments in the third period like when defenceman Vsevolod Tolstushko saved a Korean shot with his skate and on the other side a Ukrainian shot missed the net me millimeters.

For the last 29 seconds of regulation time and 71 seconds of the overtime period the Koreans played with a man advantage but Eduard Zakharchenko in the Ukrainian net had a strong night. Korea out shot Ukraine 8-0 in the 3-on-3 overtime. They managed to skate close to the Ukrainian net to shoot several times but missed out from great positions.

However, in the shootout the Koreans were eventually more efficient while Dalton made two great saves to lead Korea to the top division.