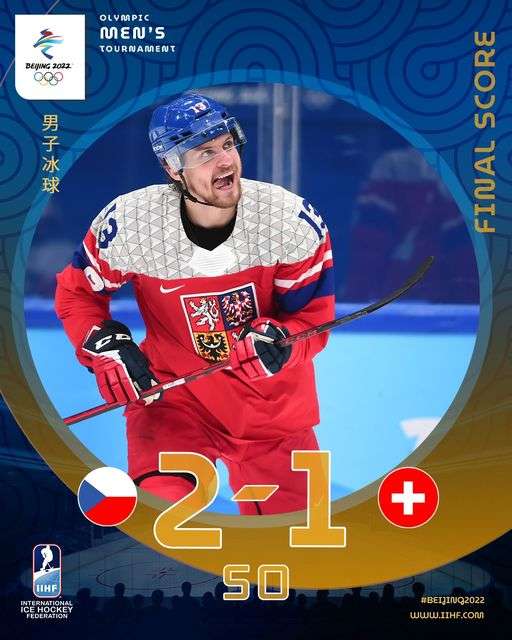 After suffering narrow one-goal defeats in their opener – Switzerland 1-0 to ROC and Czechia 2-1 to Denmark in a surprise – both teams were eager to get their first win and avoid the Group B basement with one game left. Czechia won although both got their first points following a 2-1 shootout victory, in which David Krejci scored the lone shootout goal in the second round, snapping the puck through the small hole between the glove hand, body and right bad of Swiss goaltender Leonardo Genoni.

“It’s tough to do something with the puck on that ice after a full period and overtime, so I knew that I was going to shoot. I saw a little opening and I’m glad it worked out,” said Krejci.

After stopping all five Swiss attempts, Czech goalie Simon Hrubec said about shootouts: “Before this season I didn’t like them, but I talked with my goalie coach at Avangard and I told him I don’t have self-confidence in shootouts, so we had to solve this problem. I faced maybe a thousand penalty shots after practice through the season and now I feel better about them.”

Hrubec finished the game by stopping Gaetan Haas, who tried to fake a shot before attempting a backhand deke, but the Czech goalie read it perfectly and denied the Swiss shooter any room.

“You go there and you don’t know if the goalie knows what you’re gonna do or not,” said Haas. “You just go to your bag of tricks and hope he bites, but I guess he knew what we were gonna do because he stopped every shot.”

Haas scored the only Swiss goal of regulation time – in fact their only goal of the tournament so far – in the ninth minute of the game to tie the score after Jiri Smejkal had earlier opened the scoring. And that was it. Hrubec and Genoni stopped everything else, with the Czechs outshooting the Swiss 35-25 through 65 minutes of hockey.

“We knew they were going to be tight games but I definitely expected that we would have more than one goal after two games,” said Swiss head coach Patrick Fischer. “But also, we’ve only had two against. We definitely have to find a way to score more goals. Our offence needs to be better, we need to get more traffic, win more offensive battles, but it’s a growing process.”

After feeling they didn’t generate enough grade-A scoring chances against Denmark, the Czechs seemed to be the more determined team off the opening faceoff, drew an early power play and used that to build some momentum. Just seconds after the expiration of the penalty, Lukas Klok took a shot from the point that hit a stick and bounced in the air. Jiri Smejkal bunted the puck out of the air and it was destined to slide wide of the net when it hit the skate of Swiss defenceman Yannick Weber and slid into the net.

Switzerland drew even four minutes later on its first power play. Controlling the puck from the perimeter, Sven Andrighetto took a shot from a sharp angle that Hrubec stopped and thought he had covered. However, the puck was sitting loose beside the Czech goalie and Haas banged it in.

“We weren’t happy with our PP the other night, so we tried to work on it yesterday and, for sure it felt good to score,” said the EHC Biel-Bienne captain. “But after that, I felt that our PP wasn’t great. Our unit couldn’t keep the puck in the zone. In the end, we couldn’t score and you’re not going to win much with one goal in two games.”

Czechia continued to hold the edge in play and Tomas Zohorna almost restored the lead in the final minute of the first period but Leonardo Genoni made a big glove save.

In the second period, the teams settled down into a more defensive rhythm without much in the way of quality chances until the last two minutes, when HC Davos veteran Andres Ambuhl, playing in his fifth Olympics, carried the puck into the Czech zone with speed, made a move on the defence and sent a deceptive shot along the ice that Hrubec had to be sharp on.

With the game still tied in the third period, the teams took the cautious approach, not wanting to make the crucial mistake to miss out on points for the second straight game. But as the period wore on, the Czechs began to push again and Genoni, ever the big performer for the Swiss national team, was called upon to make some timely saves. Then just shy of the period’s midpoint, Killian Mottet sent a seemingly harmless shot on Hrubec that nearly found its way through the Czech goalie, but not quite.

“It’s almost like the seventh game of a playoff series,” said Hrubec. “There is no room for error because in this small rink, if you make a mistake, it might cost you the whole game.”

Switzerland went to the power play again with 7:33 to go but generated very little from it, but inside four minutes to play in regulation time, both teams had golden chances to take the lead – first Tomas Hyka for the Czechs when he seemed to have an empty net on a rebound but was upended without getting a shot away, and then Simon Moser for the Swiss on a partial breakaway but couldn’t beat Hrubec on the backhand.

In 3-on-3 overtime, each team had two shots as the teams played continuously without a whistle until Hrubec held the puck with 30 seconds to go. In the dying seconds, Libor Sulak ripped a shot wide.

“Two good teams going at it,” said Krejci. “They’re a good team, they played fast, but I think we played well defensively. One thing we have to work on is putting the puck in the net more often, but I believe it’ll come and we’ll be fine. For now, we’ll enjoy the win, rest up and get ready for tomorrow.”