LATAM Cup and Hockey in Latin America is Fueled by Passion 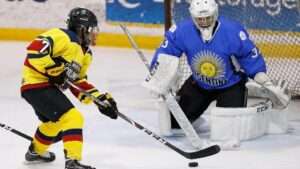 Passion for the game has no limits or borders.

A self-professed “hockey fanatic” of Colombian heritage, Otero operates Amerigol with the mission of growing hockey’s presence throughout Latin America by organizing tournaments and showcases.

Although his love of hockey began during the Panthers magical 1995-96 Year of the Rat season, the seeds of Amerigol were firmly planted when he first discovered Colombia’s infatuation with hockey, more notably inline hockey during a trip to Bogota in 2017.

Otero, the General Manager of the ACHA Div. III University of Miami hockey club, formed a relationship with the Colombian National Team as he helped organize a training camp in South Florida to help them transition their inline game to the ice before heading to Mexico for the 2017 Pan American Games. Once witnessing firsthand the passion for hockey in Latin America at those Games and the chance to spread the word, Otero began constructing his plan for the LATAM Cup, an international tournament spotlighting the talent and hockey community tucked away in Latin America.

Hosted at the Panthers IceDen in Coral Springs, Fla., the first LATAM Cup was held in 2018, with five teams and roughly 90 players competing in one division. Just one year later, the 2019 LATAM Cup’s participation soared to 21 teams, four divisions and nearly 400 players. Divisions included D1, D2, U16 and a Women’s Division while also adding teams from the Caribbean, like Jamaica, who won the 2019 D1 tournament in thrilling fashion.

“Where (the LATAM Cup) is at now, I’m completely blown away, but I’m not surprised,” said Otero. “I’m not a cocky person, but I kind of knew this had the potential to grow because of what I saw (in Colombia). Their (inline) rink is like a family hub. They have over 640 players registered for inline hockey. From the U-8s all the way to adults.”

Recently named to the NHL’s Youth Hockey Inclusion Committee, Otero aims to share his passion for the game in the League’s efforts to grow the game and provide both inspiration and inclusivity for Latinx, Hispanic and minority youths to have the opportunities to learn and play hockey.
“I can’t tell you how excited I am. The NHL has worked really hard in creating initiatives to grow the game of hockey and to change the stigma that it’s just a white person’s sport. I have a lot of ideas and this will be a great place to voice them and get feedback on them.”

While the NHL continues to broaden its diversity and inclusion approach, Otero looks to the sports community as a whole, its connection to Latin America and his hockey pilgrimage to Colombia that fuels the dedication to his mission.

“Why can’t the next NHL superstar in 15 years come from Latin America?” said Otero. “In every other sport there have been superstars that have come out of Latin America. I think that it’s important for the NHL’s growth 15 years down the line to have players with names like ‘Lopez’ and ‘Fernandez’ on the backs of jerseys to grow your fanbase.”

“It’s the same over there (in Colombia). It’s a hockey community just like it is here. They love this game as much if not more than we do. You talk to these kids and they know what happened last night in the NHL.”

In September of 2019, Colombia became an associate member of the International Ice Hockey Federation (IIHF), becoming the fifth Latin American Country to join the IIHF after Mexico, Argentina, Brazil and Chile.

The next LATAM Cup is set to be Amerigol’s largest endeavor yet, with a new U12 division and a tremendous increase of 35-40 teams from countries in Latin America and the Carribbean. Most interestingly, that number doesn’t even include teams from Africa and Asia who had enthusiastically extended their interest in participating.

Traditionally held in early September, the tournament has since been postponed due to the COVID-19 pandemic. However, when it comes to organizing the next LATAM Cup during these unprecedented times, Otero refuses to make final decisions without speaking to the teams and countries that helped make the tournament possible in the first place.

“I wouldn’t have this tournament if it wasn’t for them. It’s important everyone has a say in this event.”

A hockey dad at heart, whose son Chris captured Gold with Team Colombia in the 2019 U16 LATAM Cup Tournament, Otero is thrilled for the future of the tournament as well as the potential growth of the game he loves so dearly.

“These kids have the same (passion). Growing the game within the community. This whole tournament is a win-win-win for everybody. As this tournament continues to grow, more people become aware that people play hockey (in Latin America).”

“Seeing these kids come off the ice win or lose, they have the biggest smile on their face. To me that’s what it’s all about.”