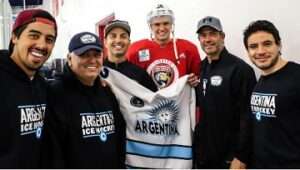 When hockey enthusiast Juan Carlos Otero first approached Florida Panthers IceDen general manager Keith Fine about hosting a Latin American tournament at the rink, he vowed that it would quickly grow into something big.

“Was I surprised? Yes and no,” Fine said. “If you talk to Juan Carlos for two seconds you see how passionate he is and he won’t stop at anything to grow the game, especially in the Latin American and Caribbean community.”

Otero’s vision will be on display this weekend at the second annual Amerigol LATAM Cup, a three-day tournament that begins Friday and ends Sunday at the Panthers practice facility in Coral Springs.

The tournament has grown in its second year: 21 men’s and women’s teams competing in four divisions with more than 400 players of varying skill levels from Argentina, Brazil, Chile, Colombia, the Falkland Islands, Jamaica, Mexico, Puerto Rico, the United States and Venezuela.

Last year’s inaugural tournament featured five countries and 90 men’s players in one division. This year’s tournament, which includes a four-team women’s bracket, an Under-16 division and two men’s divisions, is a great way to showcase Latin American hockey talent and promote the sport in a state that has a population 23.2 percent Hispanic, Otero said.

“If you want the game to grow, if you want the Latins to follow and the Hispanics to be behind the NHL in 20 years, you got to have more ‘Hernandez,’ ‘Fernandez’ and ‘Gomez’ on the back of jerseys that they can follow,” said Otero, who has been general manager of the University of Miami’s American Collegiate Hockey Association team since 2014. “Everything that hockey has and is – – the action, the speed, the dedication – – that’s part of the DNA of the Latin community. It’s a definite fit with the Latin community.”

Hispanics are making significant inroads in the NHL, on and off the ice. Toronto Maple Leafs center Auston Matthews, who is Mexican-American and was raised in Arizona, is the cover athlete for EA Sports NHL 20 video game and had the top-selling jersey on the Fanatics network of ecommerce sites, including Shop.NHL.com, NHLShop.ca and Fanatics.com, during the 2017-18 season. He had the third best-selling jersey last season.

Alex Meruelo, a Cuban-American businessman, took over as majority owner of the Arizona Coyotes in July, becoming the first and only Hispanic owner in the NHL. In August, the Minnesota Wild hired U.S. Hockey Hall of Famer Bill Guerin, who has Nicaraguan roots, as its general manger.

Panthers officials hoping that this year’s LATAM Cup will help boost interest in hockey within South Florida’s Hispanic community and increase the team’s fan base.

They noticed how last year’s tournament packed the IceDen largely with Hispanic spectators who brought vuvuzelas and a World Cup soccer enthusiasm to root for their country’s team. They ‘re expecting an even livelier crowd this weekend.

“Everything that we try to do with the Panthers, whether it’s ‘Learn to Play’ or getting more kids involved, all the programs that we provide, there’s still this kind of gap to bridge to get more people playing the sport in communities that wouldn’t normally play,” Fine said. “And this [tournament] was the perfect avenue for us to find that Hispanic, Latin population. The biggest challenge for us is now we can get them to the facility, now once they’re here and they see a game, let’s get them to the next step: Let’s put a stick in a kid’s hands and skates on their feet, get them to a [Panthers] game and maybe that will help grow the game at those younger populations where they wouldn’t normally have the chance to.”

Growth and promotion are also the goals of the teams participating in the tournament. They’re out to prove to their countries and the world that hockey isn’t just a North American or European game.

Colombia, last year’s LATAM Cup champion, will have four teams and 50 players (about 20 are U.S. residents of Colombian heritage) at this year’s tournament despite being a country without an indoor or outdoor rink suitable for hockey.

Most of the Colombian players are inline hockey payers. They arrived in Florida days ahead of the tournament to hold a few practices on ice to acclimate themselves from wheels to steel blades.

“The transition is not that easy,” said Daniel Fierro, a Colombian defenseman and a team spokesman. “But we have been able to show the potential hockey players have in Colombia, the results that we have been obtaining, to show that Colombia is champion of Latin America.”

Maroon, who played for the Stanley Cup champion St. Louis Blues last season, is a hero because he grew up playing inline and was a member of the 2010 U.S. men’s national inline hockey team.

“Now that he won the Stanley Cup, everyone is happy about that,” Fierro said. “He goes to international inline hockey tournaments so many kids have a chance to meet him, to get to know him. He’s been a huge impact for roller hockey players who want to play ice and grow in the sport. The ultimate goal for an inline player is to be an ice hockey player and be famous.”

Jamaica, which also doesn’t have an ice rink, is using its first LATAM Cup appearance as another step in the Caribbean Island’s effort to build a national team that can someday compete in the Winter Olympics, like the country’s bobsled team has.

“I like the flavor and what they’re trying to do,” Lester Griffin, general manager of a Jamaican team comprised mostly of players of Jamaican heritage who live in Canada, said of the tournament. “That’s to bring attention to all the country and the world to say hockey is really spreading.”

The lack of ice in Brazil hasn’t stopped 36 players and two teams from making their way to Florida for the tournament. While Brazil and the other teams plan to compete for a division championship, they have a friendly bond.

“Amerigol played a huge role in uniting many different teams that undergo the same difficulties and share the love for the sport so we can learn from each other,” said Henrique Degani, a spokesman for the Brazilian team. “We do crazy things for love. I like to think that hockey, although it may sound crazy, is a healthy thing to do for love.”