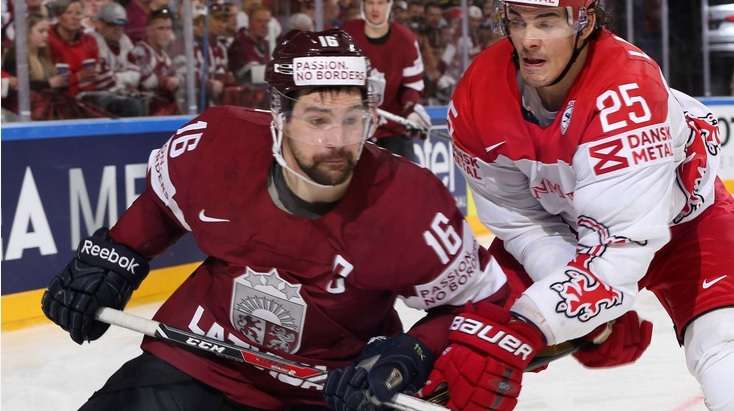 While they aren’t expected to have much in the way of fan support in the arena, the Latvians are nonetheless playing at home and hoping that can be an advantage. They probably won’t have any full-time NHLers, but they will have an internationally experienced lineup of players used to playing with each other and for coach Bob Hartley, they should prove to be a tough opponent for any team in the group and strongly contend for a quarter-final berth. Beyond the quarter-finals is usually nothing more than a pipe dream for a team like Latvia, but are the conditions right for that to happen this year?

Historically, this has been a position of strength for Latvia, with Arturs Irbe, Edgars Masalskis, Kristers Gudlevskis and Elvis Merzlikins minding the nets and turning in big performances over the past two decades. However, with the Merzlikinses expecting a baby this off-season, the team will be looking for somebody new to come up big between the pipes.

At this point, the starting job looks up for grabs between three men: Janis Kalnins, Matiss Kivlenieks and Ivars Puninovs. Kalnins, the oldest of the three at 29, has established himself as bonafide No. 1 goalie in the KHL with Jokerit Helsinki over the past three seasons, 24-year-old Kivlenieks, Merzlikins’s understudy in Columbus, played two NHL games this season and eight for the AHL’s Cleveland Monsters, and 26-year-old Ivars Puninovs, a long-time Swiss resident who starts for the SCL Tigers in that country’s National League. Kalnins and Puninovs appeared in one game each at the 2017 Worlds in Cologne,  behind starter Merzlikins, while Kivlenieks was the team’s No. 3 man in 2018.

Latvia’s preliminary roster includes six defencemen who have all played in at least two World Championships previously, led by 34-year-old Kristaps Sotnieks of Dinamo Riga, who will be playing in his 12th championship and 32-year-old Arturs Kulda, a former NHLer and KHLer who played this past season in Germany with the Nuremberg Ice Tigers. In addition to those two, Czech-based Oskars Cibulskis (33) and Ralfs Freibergs (29) bring plenty of experience to the back end.

Added to the roster from the AHL are Kristians Rubins of the Toronto Marlies and Janis Jaks of the Bakersfield Condors. At 195 cm and 100 kg, 23-year-old Rubins brings size and youth but even he has World Championship experience from 2018. Flexible Gunars Skorcovs could slot in as a seventh defenceman or a 13th forward.

The forward lines are also chock full of World Championship experience, led by Mikelis Redlihs, who will be appearing in his 13th tournament, and followed by Gints Meija, Andris Dzerins, Kaspars Daugavins, Lauris Darzins, Miks Indrasis, Ronalds Kenins and Roberts Bukarts, who have all played at least seven times previously. Other than Kenins, who plays for Lausanne HC and has played most of his junior and professional career in Switzerland, the core of Latvia’s forwards all play in the KHL. Darzins and Daugavins are both players who have produced a fair bit of offence for Latvia in the past, and Daugavins is coming off a 49-point season with Vityaz Podolsk. A younger player that may get a look is 25-year-old centre Rodrigo Abols, who brings size (193 cm, 93 kg) and skill. He’s just coming off a season where he produced 35 points in 47 SHL games with Orebo HK and then put up 10 points in nine playoff games. Despite his age, he’s already appeared in four World Championships, so he knows the system.

Due to injuries and impending free-agency, eligible NHLers Zemgus Girgensons and Rudolfs Balcers won’t be playing for Latvia this year, and Teodors Blugers is currently playing for the Pittsburgh Penguins in the Stanley Cup playoffs.

It’s been a good season for Latvian national team head coach Bob Hartley, who just finished guiding Avangard Omsk to a Gagarin Cup title in his third season behind the KHL team’s bench. Hartley can add that ring to a trophy case that includes a Stanley Cup, a Swiss title, and a Jack Adams Award as NHL Coach of the Year. Hartley is a highly respected coach and this will be his fourth World Championship behind the Latvian bench. In each of the first three, the players bought completely into his system, were competitive in every game and finished either fourth or fifth in their group. With a roster of players that have all played for him before, the former coach of the Colorado Avalanche, Atlanta Thrashers and Calgary Flames can probably expect more of the same on home ice in Riga.

Latvia is always in the mix to make the quarter-finals and there’s no question that this a realistic goal for the team this year. While the four top-ranked teams in Group B – Canada, Finland, the United States and Germany – will be missing NHL players to varying degrees and icing lineups that are not terribly experienced internationally, the Latvians will pretty much have the same lineup they always have and should feel confident about their ability to take enough points from those teams to make the cut-off. On the other side of the coin, the Latvians will have to watch out for Norway, Kazakhstan and Italy and make sure they don’t give away any points to those teams. Their four pre-tournament games this spring against Group A teams Slovakia and Switzerland were all close and low-scoring, with one win and three losses.