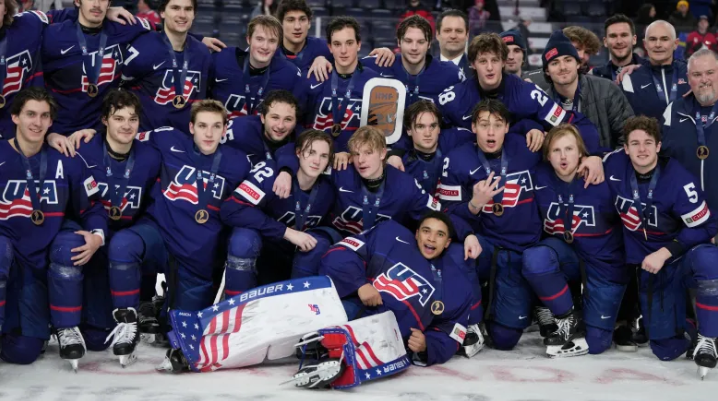 The American team poses with their bronze medals following their overtime win over Sweden on Thursday at the world junior hockey championship in Halifax.

Chaz Lucius completed a hat trick in overtime as the United States beat Sweden 8-7 in a wild bronze-medal game Thursday at the world junior hockey championship in Halifax.

The Winnipeg Jets prospect scored in the three-on-three sudden-death period when he flipped a backhand over Swedish goaltender Carl Lindbom.

Lindbom had stopped an initial chance from Lane Hutson, but the rebound went unclaimed until Lucius swept in and clinched a game that saw the U.S., which was coming off a 6-2 loss to Canada in a semifinal on Wednesday, give up multiple leads before finally prevailing.

“We were not really happy with losing Canada. But it is what it is and right when we got out of the locker room [Wednesday], we said, ‘You know what? We’ve have you got a medal [on the line],” U.S. captain Luke Hughes said.

Cutter Gauthier had two goals for the Americans, who have won a medal in six of the last eight world juniors. Logan Cooley, Ryan Ufko and Hughes also scored.

“It’s not the game we want to be in,” Lucius said. “But overall it’s a really memorable experience.”

Filip Bystedt scored twice, including a tying goal with 21 seconds remaining in regulation, and added an assist for Sweden. Oskar Pettersson, Leo Carlsson, Milton Oscarson, Liam Ohgren and Noah Ostlund had the other goals for Sweden.

It was a second heartbreaking overtime loss for the Swedes in as many days in Halifax after dropping a 2-1 semifinal decision to the Czech Republic on Wednesday.

Kaidan Mbereko picked up the win in goal for the U.S. after stopping 14 of 16 shots in the third period and overtime. He replaced Trey Augustine, who gave up five goals on 20 shots over the first 40 minutes.

Cooley opened the scoring just under three minutes into the game. It was the seventh goal of the tournament for the third-overall selection by the Arizona Coyotes at the 2022 NHL draft.

A low-scoring first period gave way to a chaotic second that saw the United States build a two-goal lead three times only to come out of the period tied 5-5.

Ufko put the Americans up 2-0 with a power-play goal in the first two minutes of the period before Bystedt got Sweden on the board less than two minutes later.

Lucius, with his first of the game, restored the Americans’ two-goal lead until Sweden tied it with goals just over two minutes apart from Pettersson and Carlsson.

Once again, the Americans surged ahead on goals from Gauthier and Lucius. But the Swedes replied with another quick pair as Oscarson and Ohgren scored in the final seconds of the period.

Ostlund scored four minutes into the third to put Sweden up 6-5, but the Swedes’ only lead of the game lasted just four minutes 17 seconds. After being knocked to the ice, Hughes shovelled the puck at the net on his knees and beat a surprised Lindbom.

“We’re not losing this game,” Hughes yelled at the players on the U.S. bench while celebrating the goal.

Gauthier appeared to have won the game with a power-play goal 97 seconds from the end of regulation as he tucked the puck under a sprawling Lindbom.

The goal survived a lengthy review, much to the relief of the Americans. The U.S. had two goals disallowed in a 6-2 semifinal loss to Canada on Wednesday.

The Swedes would not go quietly. Bystedt snapped the puck past Mbereko with 21 second left as the U.S. surrendered a lead for the third time in the game.

American forward Tyler Boucher missed the game with an injury and was replaced by Noah Laba.