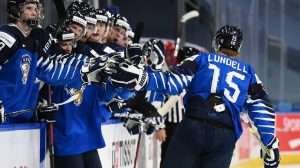 It was Finland’s first bronze medal since star goalie Tuukka Rask backstopped his nation to third place in Vancouver in 2006. In the 2010’s, the Finns won either gold (2014, 2016, 2019) or nothing. All-time, this is Finland’s seventh bronze, with five wins and two losses.

Coach Antti Pennanen’s boys, who trailed 1-0 after the first period, staged comebacks in all three of their medal-round games, including the 3-2 quarter-final win over the Swedes and the 4-3 defeat against the Americans.

Russia lost a bronze medal game for the first time in nine tries and finished out of the medals for just the second time in the last 11 years (fifth in 2018). The Russians, who took silver in 2020 with a 4-3 final loss to Canada, have one gold in their last 18 World Juniors (2011).

Both Pennanen and Russian head coach Igor Larionov gave their starting goalies a vote of confidence for the bronze medal game. Kari Piiroinen and Yaroslav Askarov each made their sixth appearance. Finland outshot Russia 32-29. Askarov performed markedly better after a rough outing in the 5-0 semi-final loss to Canada.

The Russians stormed out of the gate, firing seven shots on goal before Finland got one. Piiroinen was forced to stop Yegor Chinakhov with his blocker on a clear break. Minutes later, Russian captain Vasili Podkolzin barged to the net and just tipped a cross-crease pass off the post.

Ilya Safonov made it 1-0 at 6:03. The AK Bars Kazan winger capitalized on some spadework by Maxim Groshev, who stickhandled to the middle before launching a backhander on goal. Safonov converted the rebound for his second goal of the tournament.

To open the second period, Finnish defenceman Ville Heinola inadvertently clipped Chinakhov in the face. However, the Finns killed the penalty off with ease, and at 5:05, they got the equalizer.

Topi Niemela, who leads all World Junior blueliners with eight points, wristed a shot that Lundell tipped in. Lundell and Heinola are the only two returnees from the golden 2019 team.

Late in the period, with Finland pressing, Lundell pivoted to make a marvelous cross-crease feed to Eemil Viro, but the puck bounced off Viro’s stick and he was shaken up after going hard into the end boards.

In the third period, Mikko Petman made it 2-1 Finland at 1:13, getting his stick on Viro’s left point shot to deflect it past Askarov. It was a great time for the 19-year-old Lukko winger to notch his first World Junior goal.

At the Russian bench, Podkolzin urged his team to keep giving it their all. Unfortunately, he bumped into teammate Shakir Mukhamadullin in the neutral zone and his stick then hit Mantykivi in the face.

Taking a double minor for high-sticking with under seven minutes to play was a tough blow for the trailing Russians. The Finns, whose PP came in clicking at 40 percent (8-for-20), couldn’t get a shot here, but it killed valuable time.

Larionov called his timeout and yanked Askarov for the extra attacker with 1:55 left and a faceoff in the Finnish end. The Russians stormed Piiroinen’s crease, but couldn’t jam one in. Time ran out as Lundell, with his team-leading sixth goal, and Juuso Parssinen added empty-netters to round out the scoring.

The Finns, not as talented on paper as in previous years, did well with their relentless five-man commitment to two-way hockey. The jury is still out on whether Larionov’s vision of resurrecting a more creative, Soviet style of Russian hockey will spawn gold someday.

After not suiting up against Canada, forward Vladislav Firtsov slotted into Larionov’s lineup here in place of the injured Arseni Gritsyuk. Finland, meanwhile, replaced forward Petteri Puhakka with Roby Jarventie.

Both Finland and Russia will be looking to top the podium when the IIHF World Junior Championship returns to Edmonton and Red Deer in 2022.