Magyars on the march 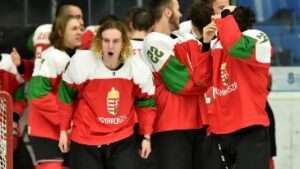 Hungary’s juniors roared into U20 World Championship Division IA for next season with a perfect performance at the 2020 IIHF Ice Hockey U20 World Championship Division I Group B event in Ukraine. The Hungarians won all five games, with an aggregate score of 29-16, to top the group ahead of France. The host nation took bronze ahead of Poland following a 7-3 win over Estonia in the last game of the group. Italy finished bottom of the pile and is relegated to the Division IIA.

The key game arrived on Tuesday noon in Kyiv when Hungary took on France. The two nations were already out in front by that stage with a 3-0 record and both knew that victory in regulation would secure top spot. A month earlier, the teams played a warm-up game where Hungary opened a 4-0 lead but had to hold on as France battled back before losing 3-4, and the action in Kyiv followed a similar pattern.

This time, the Magyars scored twice in the opening frame with Levente Keresztes and Marcell Revesz on target in the first 10 minutes. Zsombor Dozci extended the lead in the second period, but France once again began a fightback. Quentin Tomasino pulled one back late in the middle session and “Les Bleuets” moved ahead on the shot count in the third but could only find one more goal through Samuel Rousseau. Once again, Hungary prevailed by a narrow margin, and this time it was enough to clinch top spot and a return to Division IA after a two-year absence.

“The guys were disciplined, they all worked hard,” he said. “The team did not throw the puck away, they played with maturity and displayed everything good about Hungarian hockey.

“We’ve done the hard work and it feels good to get the results of that here.”

Hungary’s leading scorer was 19-year-old Natan Vertes, who had 10 (6+4) points for the tournament. He was back for his second U20s campaign, having collected three assists in last season’s competition. Fully fit once again after missing much of the previous campaign with a broken collar bone, he’s also doing well in the NAHL with 21 (14+7) points in 23 games for the Aberdeen Wings. Keresztes and Revesz also made big contributions, finishing with nine points apiece. Keresztes is just 17 and plays his club hockey for Twin City Thunder in the NCDC after emerging through the ranks at MAC Budapest. Revesz, 19, has played the bulk of his career to date in Switzerland and made his senior debut last season with the GCK Lions in the second-tier Swiss League. This year was his fourth – and most productive – U20 World Championship appearance.

For France, a disappointing 2019 continues. The juniors came to Ukraine hoping for an immediate return to Division IA after relegation last season. Instead, Pierre Pousse’s team had to settle for silver after defeating Poland in its final game of the tournament. This is the first time in 2008 that Hungary’s U20s have finished ahead of their French counterparts.

The Poles took bronze and also had the tournaments leading scorers. Jakub Lewandowski topped the charts with 13 (5+8) points ahead of his team-mate Kamil Walega (6+5=11). Lewandowski, 19, is playing his first season in North America with the Sioux Falls Stampede of the USHL after learning the game at hometown team Sokoly Torun. Walega is already mixing it with the men in the Polish championship, where he has 11 (4+7) points from six games for GKS Jastrzebie.