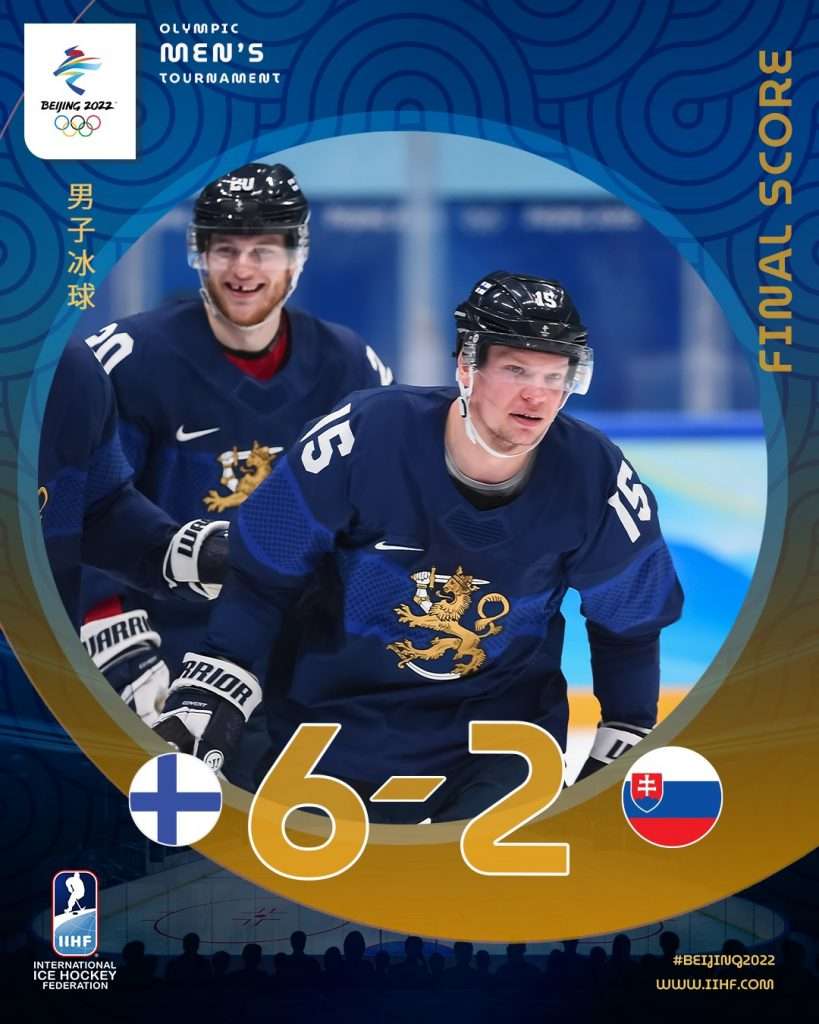 Sakari Manninen scored three goals and Miro Aaltonen scored two for Finland and Juraj Slafkovsky scored twice for Slovakia in Finland’s 6-2 win in the first game for both teams at the 2022 Olympic Winter Games.

One of the projected top picks of this year’s NHL Entry Draft, Slafkovsky became the first 17-year-old to score in Olympic men’s ice hockey since 1984, when Ed Olczyk scored twice for the USA in Sarajevo.

The Slovaks came storming out of the gate and captain Marek Hrivik had a great chance in the first minute when he received a pass from linemate Peter Cehlarik in the slot but just failed to convert on the backhand. They continued to dominate the early minutes, however, and opened the scoring at 5:33 when Milos Roman’s wraparound attempt was stopped by Sateri, but Slafkovsky was right at the edge of the crease and put the rebound up over the Finnish goalie’s shoulder.

The Finns didn’t record a shot in the first 10 minutes of the game but reversed that trend in the second half of the period with six shots and three goals.

First it was Manninen, who got behind the Slovak defence and took a breakaway pass from Teemu Hartikainen. Manninen actually had a passing option a two-on-nothing break but elected to shoot, beating Branislav Konrad over the glove.

Then the Finns got the game’s first power play and turned up the heat. First Mikko Lehtonen hit the post, and at 14:22 Harri Pesonen gave the Finns their first lead, putting in his own rebound after Konrad had stopped his initial one-time attempt at the side of the net.

Slovakia had a chance to draw even with a pair of power plays of their own but failed to capitalize, and when Aaltonen finished off a 2-on-1 by one-timing a pass by Joonas Nattinen past Konrad late in the period, one had the feeling that Jukka Jalonen’s always-disciplined group was going to be awfully tough to beat on this night.

Manninen scored his second goal on his second breakaway, just shy of the game’s midpoint. This time he went with a wrister along the ice through the legs of Konrad. Just over two minutes later, Slafkovsky matched him with his second, picking up the puck along the end boards, circling out front and beating Sateri to the blocker side before celebrating with a big leg kick.

But if Slovakia had designs on a comeback, they were dealt a serious blow on the first shift of the third period when Manninen potted his third. Peter Ceresnak tried to carry the puck out of his zone but was stick-checked by Hartikainen, who then found Manninen streaking to the net for the one-touch re-direct into the top corner.

Aaltonen finished the scoring with five minutes to play, finishing off a tic-tac-toe passing play with a one-time slapper off the post and in.