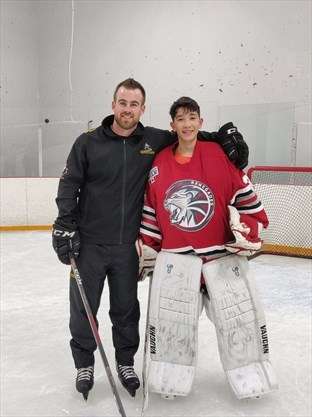 But with Chilean ancestry, it would be difficult to find a reason for the Markham resident to dream about donning a hockey jersey on behalf of his father’s homeland.

The 16-year-old goaltender is scheduled to fly Sept. 4 to Miami where he will join Chile’s national men’s hockey team to participate in the 2019 AmeriGol Latam Cup.

“No, actually, I didn’t know about it,” admits Vargas, a Grade 11 student at St. Augustine Catholic High School in Markham. “Hockey in South America is brand new. I don’t even know what calibre or style of play there will be. I’m going to have to figure it out when I get there.”

Chile is scheduled to face off against Venezuela in its opening game on Sept. 6.

A former member of the Markham Waxers, Vargas plays for the Don Mills Flyers midgets in the Greater Toronto Hockey League.

A coach from a Montreal team connected to the Chilean program saw Vargas play last season. He approached his father, Javier, with an offer to consider playing for the under-18 Chilean team.

That team failed to materialize, but he was invited to join the senior men’s squad.

“It didn’t take long … about a minute,” Vargas said of his decision to accept. “I’m a little bit nervous, being so young and excited, too.

“It’s my first time to play hockey on an international stage. It’ll be interesting to see what comes to the table.”

He is qualified to play, through his father, who left Chile for North America as a nine-year-old.

The Latam Cup is being contested at the NHL Florida Panthers’ Ice Den in Coral Springs.

Known more for in-line hockey, Chile is an affiliate member of the International Ice Hockey Federation. Chile made its international debut in 2017.