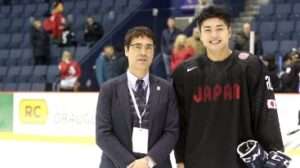 Buoyed by a strong finish at last year’s World Championship, a hardened Japan aims to come out of the traps flying in their quest for a return to Division IA.

Japan will face Estonia, the Netherlands, Poland, Romania and Ukraine at the 2019 IIHF Ice Hockey World Championships Division I Group B played in Tallinn, Estonia between 28 April to 4 May. Following relegation in 2016, Japan now gets ready to improve on their two consecutive silver medals at Division IB level.

With speed and skating being the hallmark of the Japanese game, standing up to be counted against bigger and bulkier opponents has previously held back their rise to prominence.

When taking over the reins as Japan’s new head coach in the summer of 2017, Yuji Iwamoto introduced a significant shake-up in their style of play. Influenced by working together with Willie Desjardins at Snow Brand Sapporo at the turn of this century, Iwamoto is ambitious in his long-term strategy to change the mindset of Japanese hockey.

Advocating a playing style fueled by aggression at both ends with confident players willing to give their all for the Japanese cause, Iwamoto’s baptism of fire saw a new-look Japan finish second at the 2018 IIHF Ice Hockey World Championships Division I Group B in Kaunas, Lithuania. Derailing their hopes for an instant return to Division IA was a 6-1 loss against a fired-up Lithuanian team with Japan being severely outmuscled during the early stages of that game.

“Looking back at that game now, the guys were a bit nervous. Lithuania came hard on us right from the start with their forecheck and we didn’t fight back. We didn’t hold back and weren’t as strong mentally, that is why we lost,” said Iwamoto on what proved to be a valuable lesson for his players.

We need to start believing that we can play at a higher level and start to have more confidence.
Yuji Iwamoto
Japanese head coach

“We showed it at the last World Championships in Kaunas when the guys picked it up in the last game against Ukraine,” Iwamoto said of a 7-1 demolition by Japan who got fully up to speed during the final day.

“It will take three-four years for our new style of play to work in full. In order to do that we also need to even up the level of the Asia League and get more exhibition matches against opponents like for example Lithuania and Hungary as we need more experience,” he said.

Last November saw Japan return to Lithuania. At the Baltic Challenge Cup in Vilnius, they once again locked horns with the Baltic hosts but also got severely tested by Belarus’s representative Metallurg Zhlobin and a Latvian league select. Another important test for Japan came in February when they took part in the Olympic Legacy Cup against Latvia, Kazakhstan and Korea. Vital match-ups against three higher-ranked national teams played in Korea’s Gangneung, a fitting venue for Iwamoto as his long-term aspiration for Japanese hockey is revealed.

“While playing at the next Olympic Winter Games will not be very realistic, instead we are looking more at competing for a place at the Winter Games in 2026 and 2030,” he said.

One player hoping to play an integral part in Iwamoto’s lofty ambitions for years to come is Seiya Hayata. The 23-year-old defenceman played his first senior World Championship in Lithuania last season and admits it took him a while to settle into international hockey.

“The players were bigger and stronger, but the games were slower than Asia League games. Then we came up against Lithuania and I was panicking a little bit. Now I know what the teams are like at this level,” said the Hiroshima-born blueliner, who is clearly relishing playing for Japan under Iwamoto.

“I like it, playing his style is lots of fun. I like going aggressive, even on defence,” said Hayata, who despite the rugged style advocated by Iwamoto, is far from reciprocated by his coaching style on the bench.

“When I make a mistake he is not yelling, but instead he tries to teach me what I should have done instead. That is a little bit different to the coaches I have in Asia League, so I have fun playing for him,” Hayata said.

Hayata, who previously played junior hockey in North America, has just completed his third consecutive season with the Tohoku Free Blades. One of four Japanese teams competing in the Asia League where strong ties are being honed with Korean hockey at all levels.

“We have good cooperation with Korea,” said head coach Iwamoto. “We had a training camp there and in June we have our under-20 team doing the same,” he continued.

Three years have passed since Japan and Korea last locked horns at the 2016 IIHF Ice Hockey World Championships Division I Group A in Katowice, Poland. An optimistic Hayata hopes it might not take too long before they once again face off against each other in a higher division.

“Even if we didn’t win gold at last year’s World Championship, in my opinion, we were the best-skilled team in the tournament. Lithuania had two-three very good players, but not everyone, so I think we have a chance and now I know what to expect,” said Hayata as the final preparations are honed ahead of the World Championships contested in Tallinn´s Tondiraba Ice Hall.

While Ukraine awaits for Japan in their opener, it will be newly-relegated Poland who enters the contest as favourites for promotion. A challenge Japan will relish as they will be inspired by their neighbor Korea, who during the 2012 IIHF Ice Hockey World Championship Division I Group B in Krynica derailed Poland’s promotion campaign which simultaneously kick-started Korea´s ascent upwards.