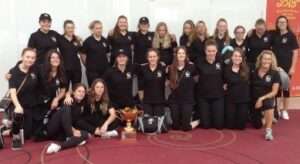 This morning New Zealand’s Under-18 women’s hockey team will be boarding a plane to Kuala Lumpur to compete at the 2018 IIHF Challenge Cup of Asia. For some, like rookie Jessie Parker, this will be their first overseas tournament.

The Auckland-based defender was initially named as a reserve when the squad was announced in September last year, and at the time, Parker said she was “screaming for a solid five minutes.” That elation went further after finding out a week later that she would now be making the journey to Malaysia alongside her teammates when another had to unfortunately drop out. “It was out of this world, I’ve never felt happier in my life, it was amazing,” Parker exclaimed upon hearing the good news.

Over the past week, the Under-18s have been together completing a rigorous training camp in Auckland under the guidance of head coach Angelique Mawson. There the team focussed on improving breakouts from their own zone and regrouping to attack.

From following the recent women’s tournament at the PyeongChang Winter Olympics, Parker found herself more inspired to compete in Kuala Lumpur as she watched the likes of Team Canada and Team USA putting into practice those very same drills. “To be able to see the drills that we’re doing applied at such a high level is really cool…they were playing really well, the speed and accuracy, it was really easy to see when they applied their drills to the game,” said Parker.

During training camp, the New Zealanders were also put through their paces with fitness testing on a hot, humid Auckland day – that’s only a sample of the intense heat that will likely greet the team in Malaysia. With temperatures in Kuala Lumpur set to reach over 30 degrees celsius this week it’s just as well ice hockey is played inside a freezing barn, rather than being exposed to the elements like their field hockey counterparts would be.

As far as team strengths go, Parker believes it’s their ability to defend well and keep the puck in the offensive zone. Other teams will find it hard to score if New Zealand manage to control the play so effectively, as was the case at the 2017 Challenge Cup where the team scored 57 goals while only allowing nine in return. 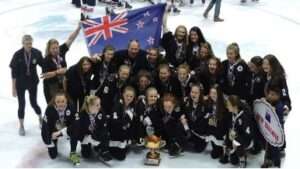 Last year for the first time in the ten-year history of the Challenge Cup of Asia tournament, New Zealand sent a team over where they would go undefeated with a 6-0 record, including a 4-3 upset win over host nation Thailand, to claim the gold medal.

The Challenge Cup was created by the IIHF to give Asian countries that either play in the lowest division or are not part of the World Championship program the opportunity to complete and develop hockey in those regions.

In 2017 there were seven teams in a single division, but now with Chinese Taipei sending their own under-18 team this year, the tournament has been split into two divisions. New Zealand make up the top division with Singapore, Thailand, and Chinese Taipei. While the lower division comprises of India, the Philippines, Malaysia, and United Arab Emirates.

Once again, Thailand will likely be New Zealand’s biggest challenge at the tournament. But it may be a tougher ask this time around with the Kiwis playing back-to-back games – less than 24 hours before that penultimate matchup they will face Chinese Taipei.

Heather McAslan, Parker’s roommate during training camp, added “We played Thailand last year and the game was only won by one goal, so they’re pretty good…and we’re not really sure how the other (countries) play, so you’ve got to get there and figure out how they play before you can figure out how you play them.”

The fact that these girls are taking on the senior national sides of other countries is also not lost on them. “It’s quite nerve-racking,” McAslan concluded before Parker interjects with a low-key “We’ve got this.”

With the tournament taking place in March, for these young athletes it occurs during the first term of the school year. To make up for the time lost in the classroom, schools supply the team with “massive” folders of homework so they don’t fall behind their classmates. On top of that, some of the girls have to complete internal exams much earlier than their peers, in McAslan’s case it’s four weeks, while others play catch up on assignments and sit exams when they get back.

Being her first international hockey tournament, Parker is looking forward to the learning experience that comes with that and is earnest about her own performance expectations. “As a rookie I’m probably not going to be doing that great, but I’m just going to be giving it absolutely everything I’ve got and I’m sure the rest of the girls are in that same mindset too,” Parker stated.

But her biggest highlight could be putting on that black jersey representing New Zealand. “It means everything in the world to me. I’ve been imagining just putting on this amazing jersey with my name on the back for months and months. I’m so excited, I’m so pumped to be representing my country in such an awesome sport.”

Combining that confidence in her team with a tireless dedication to the cause, it’s hard to argue with the rookie on New Zealand’s chances of returning home with another gold medal around their necks.