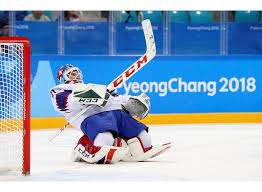 For the first time in the nation’s history, Norway has made it to the final eight of men’s hockey at the Winter Olympics following a 2-1 overtime victory over Slovenia on Tuesday.

The first 40 minutes saw just one goal scored, an important one for Slovenia, who was missing Ziga Jeglic after he was suspended for the remainder of the tournament using a banned substance. At 6:38, Jan Urbas scored on the power play after one-timing a pass from Jan Mursak near the point. Urbas, a dangerous shooter with Slovenia, managed to get the puck just under Lars Haugen’s left pad, the lone mistake the Norweigan goalie made in the game to put Slovenia up ahead.

A strong goalie battle between Haugen and Gasper Kroselj was one of the main reasons why the score was so low heading into the third period. But at 43:06, Tommy Kristiansen, who was ejected after a headshot against Germany earlier in the week, would put up the first goal for Norway after taking a feed from Martin Roymark, beating Kroselj blocker side to make it 1-1 to keep Norway’s chances alive.

For Haugen, the Norweigan netminder has been the story since the team began to play at the tournament. The team had just four goals in their first four games of competition, and Haugen had to be strong in each of those games to make up for the lack of scoring. On Tuesday, Haugen made 33 saves, including multiple stops on Mursak, Slovenia’s most dangerous forward.

One of the questions heading into the tournament was if this would be the final Olympic tournament for Patrick Thoresen. Assuming Norway even makes it to China in 2022, Thoresen would be 39 years old, and while he’s still a productive player, things can change over the next four years. A former NHLer, Thoresen scored just one goal against Sweden, with Norway struggling to find their offence in the game.

It was fitting that the former Edmonton Oilers and Philadelphia Flyers forward was apart of the game-winning goal in overtime. Just three minutes in, Thoresen was stopped by Kroselj before a scramble in front ensued. The puck made its way out of the crease area and on to the stick of Alexander Bonsaksen, who sent one past Kroselj, who had time to recover, to give Norway their first Olympic victory outside of a consolation game.

With the win, Norway will have the honour of facing Russia at 16:40 local time in PyeongChang in the second quarter-final game of the day. It’s their first Olympic victory since 1994 and will be their first time they’ve ever qualified for the quarter-finals, a game that will go down in history for the Nordic nation.