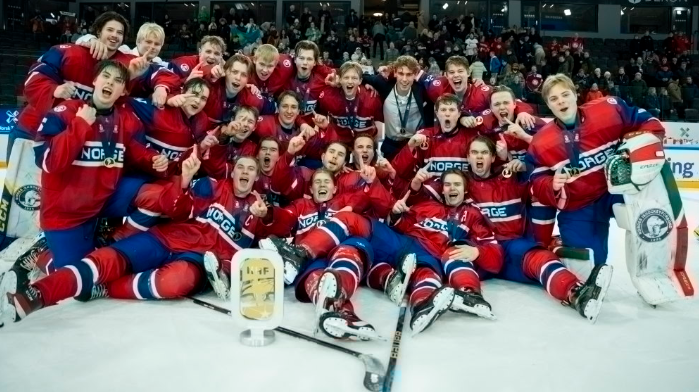 The Norwegian team celebrates with the trophy after beating Kazakhstan in the deciding game for gold at the 2023 IIHF Ice Hockey U20 World Championship Division I Group A.

Is there anything sweeter than convincingly winning a world championship on home ice?

The Norwegian Ice Hockey Association would likely respond to that question in the negative, as their U20 national team just gained promotion by going a perfect 5-0 on home ice in the Oslo suburb of Asker.

“It feels great,” explained Norway head coach Anders Gjose. “It’s a big step in our developmental plan to reach the top division and get to play against the best opponents in the world. That’s the best showcase window for our players.”

The IIHF Ice Hockey U20 World Championship Division I Group A featured all the excitement anyone could wish for in a tournament. Entering the final day of play, all three games had implications on who would gain promotion and who would be relegated. About the only thing that was certain heading into the final games was that France could neither finish first nor last, an achievement in and of itself.

More importantly, host Norway entered the final game of the tournament with a perfect record and solely needed one point to gain uncontested promotion back to the top-level IIHF World Junior Championship next winter not far from home in Gothenburg, Sweden. The 4-0 win over Slovenia and 4-1 victory over Scandinavian rival Denmark were somewhat convincing, but in between, Norway needed tight 3-2 victories over France and Hungary to claim first place heading into the final game.

Their opponent in this final game would be Kazakhstan, which had to win in regulation time to gain promotion. The Kazakhs had lost their first game 2-0 to France and were even down 2-0 to Hungary after two periods, but then charged back to not only defeat Hungary, but win its next two against Denmark (4-0) and Slovenia (4-2). It was clear they were going to have to play their best game of the event to date in order to knock Norway down from first place.

With promotion on the line, both teams entered into play a bit cautious and very alert, setting up what could best be described as a chess match of sorts. After surviving a shorthanded situation right in the first six minutes of play, Norway broke the ice on a goal by Petter Vesterheim in the 15th minute of play to get things rolling. For Vesterheim, it was his second goal and fifth point of the tournament. That would be the only goal of the first period.

The second period painted a much different picture. Norway struck early on a power play goal by Gabriel Koch. Eight minutes later, the team went up 3-0 on another power play goal, this time by Leo Halmrast. With things looking like the game could turn into a blowout, the Kazakhs struck back less than a minute later on a tally by Aldiyar Nurlan, who profited from a nifty pass from the high slot by Roman Yermak, finally beating goaltender Markus Rohnebak Stensrud for the first time.

The scoring continued when a Kazak defender overplayed the puck in his own zone as the last man, then helplessly watching as Michael Nygard picked it up and moved in on a breakaway that concluded with him adeptly deking out goalkeeper Roman Shefer. But just 30 seconds later in the 37th minute of play, Daniil Tsybin completed a successful wrap-around to cut Norway’s lead back to two, a score that would stand until the end of the second period.

The third period saw a return to the chess match. Kazakhstan invested more in puck control and entering the zone while Norway solidly shut things down and placed an emphasis on delimiting opposition opportunities. This went on continually until a heavy and high wrist shot from the blueline by defenseman Isak Hansen gave Norway a 5-2 lead and served as a very rewarding breath of fresh air.

Kazakhstan continued to mount pressure and struck to make it just 5-3 with a power play goal by Roman Yermak in the 56th minute of play. Shortly thereafter, Kazakhstan pulled its goalie and play took place primarily in Norway’s zone for the final two minutes of play. Once the final buzzers rang, the players hit the ice to charge their goalie, knocking the goal off its moors in the process.

Norway had gone 5-0 in tournament play on home ice to gain promotion.

“What our boys did here at home, going 5-0, is really impressive. The players had to overcome the mental pressure of home ice and a building full of plenty of scouts! It was a solid performance by the team,” said Gjose.

As proud as the players can be, part of this squad will not taste the fruits of this year’s labours, aging out of this age group while creating new opportunities for those to come.

“It feels fantastic. We’ve a great group of players,” stated elated captain Sole Marius Ryen. “We’ve worked hard throughout the whole season to this point, so it’s well-deserved. I hope next year’s group will be able to keep it up.”

A week of furious action included more than enough results to raise the well-informed hockey fan’s eyebrow. Third place France looked like it was going to really make things interesting after its 2-0 win over Kazakhstan, close 3-2 loss to Norway, and ensuing 5-2 victory over Slovenia. Alas, the team blew a 4-2 third period lead to Hungary in Game 4 and ultimately lost 5-4 in a shootout that required 24 penalty shots. Their tournament concluded with a 4-3 regulation loss to Denmark, a game in which they trailed by one goal every step of the way, only to tie things late in the third period and see Denmark score the game-winner 30 seconds later, less than five minutes before the game ended.

Hungary definitely showed the hockey world that it belongs in this group and may be contending for promotion in the very near future. After taking Denmark to overtime in a 3-2 loss, the Hungarians gave Kazakhstan a real scare in dropping a 2-0 lead to lose 3-2, a result that mirrored the one they achieved against host Norway as well. The OT victory against France described above was the turning point for the Magyars, but Hungary entered the final day of play still within earshot of relegation.

Their opponent would be Slovenia, a team thought to be able to make some music at this tournament but save for a 6-1 deconstruction of Denmark in their second game of tourney play, the Slovenes had come up short in regulation time against all other competition. With Hungary gaining momentum, the contest was bound to be a big one for the geographical neighbours, but neither was 100% in charge of its own fate. They simply knew they had to win, and it better be in regulation time.

The reason for that conundrum was that last place Denmark still had a game against France and two points in hand. That meant that a regulation win for the Danes would shoot them past whoever lost the Hungary versus Slovenia match-up.

With that, pure intrigue was in store for all three of the final games.

And Hungary versus Slovenia turned into a barnburner. Despite a 3-1 lead at the start of the second period for Slovenia, Hungary eventually charged back to take a 5-3 lead. Slovenia kept coming back to make it 5-4 and later 6-5, but the Hungarians put the icing on the cake of a 7-5 victory with an empty-net goal in the 60th minute of play to maintain the class.

Slovenia then watched dreadfully as Denmark and France played the expected tight-knit match. Denmark had 1-0, 2-1, and 3-2 leads, but saw France tie things up again in the 55th minute of play. Then, as if a sign from the universe, Victor Sand netted the 4-3 game-winner in the 56th minute of play to ultimately send Denmark skipping over Slovenia in the standings and avoid relegation in what was truly a do-or-die game.

With that, the fate of the Slovenes was sealed.

“We prepared really well for this tournament. Then we lost a few guys before the tournament. We had logistical issues,” shared Slovenian head coach Lovro Bajc. “Sure, we’re sad about the outcome. We’re disappointed, but the young guys we have in this team will learn. We’re coming from a small country. Our players will have to learn from this, gain experience, and take it with them moving forward.”

For the Danish ice hockey program, retaining the class was of the utmost importance, even if the circumstances surrounding the achievement surely didn’t help anyone’s blood pressure.

“I feel great. I feel great for the boys too,” stated clearly relieved coach Jens Nielsen. “We didn’t play the greatest tournament, but we kept believing that we could win some games and get some points. And we did it. I’m really very proud of these young men. They played a really good hockey game, especially over the last 20 minutes, when we needed it most.”

“We showed we wanted it more. We had to do it. We had to compete for the logo on our chests. And that’s what we did in order to have a chance next year too,” explained captain Jonas Christensen, who couldn’t emphasize enough the importance of maintaining the class, “This was a very, very important game for our team. It was my last year of play at this level, and we had a very young team here in Norway. So, it was important to achieve this, build on this experience and move forward with the young players and the future of Danish ice hockey.”

The coach reinforced this sentiment, “We had a young team playing at this tournament and we knew we had to get more physical and stronger. We see that we have to practice harder back in Denmark, every day, and when it comes to the national team. We have some really good guys coming up and I think we have a good future ahead. I think we’re going to have to be reckoned with soon when it comes to going up to the A group.”

Tops in the tournament

Named to top Goalkeeper in the tournament was Norway’s Markus Rohnebak Stensrud, who had five victories, a 92.8 save percentage, and an impressive 1.60 goals against average.

Named to top defenseman in the tournament was Hungary’s Zeteny Hadobas, who finished 1st overall in scoring with one goal and 11 points while going +2.

Named to top forward in the tournament was France’s Matias Bachelet, who led his team in scoring with two goals and seven points, finishing tied for third overall in tournament scoring with Norway’s Vesterheim.