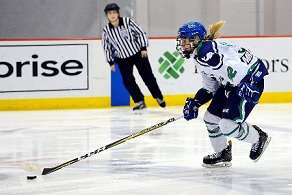 A Czech national team standout at an early age, Katerina Mrazova chased her dream of playing in the United States and is turning in a whale of a rookie season in Connecticut.

By Jared Clinton – The Hockey News

Katerina Mrazova always knew she wanted to make the leap to the United States from her home in the Czech Republic. It was her dream to play stateside. And on-ice, making the move was seamless for Mrazova, who had been a standout at a young age with the Czech national team and an alternate captain at the U18 World Junior Championship. She was a gifted offensive talent with untapped potential.

Off-ice, however, she faced a significant hurdle.

“I didn’t know English,” Mrazova, 26, said. “I couldn’t speak it at all. So, the transition to come to the U.S. was very hard. The culture wasn’t that different, but more difficult was English. I had to figure that out.”

But Mrazova wasn’t heading to North America without a plan. Following her turn at the U18s, where she was named a top-three player for the Czech side at the tournament and notched five points, all assists, in five games, she set her sights on what was then the lone professional women’s league, the CWHL, and managed to land with the Boston Blades.

On that squad, Mrazova, then just 19 and the Blades’ youngest player, skated alongside some of the game’s elite, including Hilary Knight, Meghan Duggan, Kacey Bellamy and Gigi Marvin. The experience, Mrazova said, was one of great growth. She took great strides in Boston during the 2012-13 campaign, one that saw her become the first European player to hoist the Clarkson Cup. But Mrazova’s intentions weren’t to remain in the CWHL. Rather, she had a desire to take her game to the NCAA, finding a fit at the University of Minnesota-Duluth. And it’s with the Bulldogs that Mrazova really began to round into form.

Offensively, the growth was evident. A steadily contributing freshman, Mrazova scored one goal and eight points in her first college campaign, and she saw an upturn and continued as a steady contributor through the final three years at Minnesota-Duluth. In 101 games from her sophomore to senior season, Mrazova scored 24 goals and 67 points. However, it was what the college game taught her away from the puck — and off the ice — that took her game to the next level.

“For me, I’ve always played center and (the NCAA) helped me a lot to figure out the defensive zone situations,” Mrazova said. “The systems were the most important thing that I really learned at college, and preparation for the games, how to get ready.”

With what the college game taught her, and how it rounded her out as a professional player, Mrazova’s message to her national teammates is that they should do what they can to follow in her footsteps. “I think to come to the US is the best decision I’ve ever made…When I go back to Czech, I always say to the younger players that they should come to the U.S.,” Mrazova said. “It’s the highest level, best hockey they can play.”

Playing at such a level, too, has made Mrazova’s second foray into the women’s professional ranks far more successful than her first, from a statistical standpoint. After finishing her tenure with the Bulldogs, Mrazova signed on with and has made a splash as a member of the NWHL’s Connecticut Whale. In 12 games, her six goals — the sixth-best total in the league — and 10 points put her first in team scoring. And with her team-leading point total in her back pocket, Mrazova is headed to the NWHL all-star weekend, which takes place Feb. 9-10 in Nashville. She’ll compete in the skills competition’s trick shot challenge Saturday before lining up as a part of Team Szabados in Sunday’s All-Star Game.

Once the dust settles from the all-star weekend, though, Mrazova will head back to Connecticut, where the Whale are looking to reverse their fortunes. Last in the league and nursing a league-worst minus-37 goal differential, chances are Connecticut will miss the post-season or, at best, be bounced early in the post-season. With that, Mrazova’s goals for this season have changed. While an Isobel Cup would be nice, she’s focused on the World Championships with Czech Republic. What the future holds beyond that, Mrazova doesn’t yet know.