Unsong heroes Sabahudin Kovacevic and Ales Music fired Slovenia ahead to a two-goal cushion in their pivotal second match against Denmark in Group D. Jan Urbas added a late goal as Slovenia rolled on to a 3-0 with Gasper Kroselj recording a shutout with 32 saves.

Slovenia’s second consecutive win at the Final Olympic Qualification mean they are now one game from sealing a ticket to PyeongChang 2018.

“We knew we had to skate really well in all zones and be disciplined in the neutral zone and I think it was the key for us because we take a lot of pucks off them from the neutral zone and counter attack on them,” said a delighted Slovenia’s defenseman Kovacevic in his post-match interview.

Despite outshooting their opponents 32-21, Denmark failed to find the offensive spark required. With two straight defeats Denmark is down and out in their hopes of reaching their historical first Olympic ice hockey tournament.

“First and second period is ok,” said a dejected Denmark’s national team coach Jan Karlsson. “But after their second goal our power went out.”

“Technically and skating wise Denmark is really good, so there is no point for us to race against them in that way as then we would then lose,” said Slovenia’s head coach Nik Zupancic

A sloppy defensive play by Philip Larsen was picked up by Kovacevic who barged ahead to break the deadlock in this pivotal encounter at 24:18, firing a wrister past Frederik Andersen.

With a 1-0 lead, Slovenia shut up shop reminiscent of their last competitive meeting against the Danes, at the 2015 World Championship when the Central Europeans ran out as winners thanks to a sole strike.

When Mitja Robar served a five minute boarding call for Slovenia and then just 18 seconds later was joined by Urbas as the Central Europeans were fielding too many men, Denmark got their big chance to try and hit back.

While Larsen directed most of the play from the point, the Scandinavians seemed to lack any cutting edge in their offensive play as Slovenia weathered the storm to the joy of their travelling contingent of supporters.

“The turning point in the game was when we managed to survive that penalty kill which gave the team a great boost,” said Zupancic.

The game tilted further into Slovenia’s favour when Anze Kuralt barrelled down the left side to pick out Music in the slot who fired home 2-0 after 49:18.

But when the expected frantic rally from Denmark never gathered momentum, it was Urbas who streched Slovenia’s lead to 3-0 on a powerplay with 2:11 left of the game when he fired home a slapper from the slot after Anze Kopitar had squeezed past Jesper B Jensen from the right wing.

While Slovenia one game away from their second consecutive Olympics, it is deja all over for Denmark. During the Final Qualification for Sochi 2014 they lost against both Belarus and Slovenia just as in Minsk this year.

Having mustered two goals from their 64 shots over two games Denmark will now be looking to restore some pride in final game against Poland. Meanwhile, Slovenia’s head coach is doing his best to put lid on the expectations ahead of their final day showdown in Group D versus Belarus on Sunday.

“There is no time to celebrate but just to prepare for our final game which will come down to 60 minutes of play, so let’s see what will happen,” he said.

With two wins out of two, Belarus are now only one win away from making their fourth Olympic appearance.

“We are exactly where everyone wants to be,” said Belarus team coach Dave Lewis. “We are happy where we are, but we are not finished yet.”

Sergei Kostitsyn led the team on points with 0+3 while goals by Nick Bailen, Andrei Stepanov, Roman Graborenko and captain Andrei Stas hoisted Belarus out of trouble during a first frame which saw them turn the game around after going two goals down.

Bartlomiej Bychawski, Aron Chmielewski and Bartlomiej Pociecha got on the scoresheet for Poland while Rafal Radziszewski recorded 28 saves. Following two straight defeats, Poland is out of the running for PyeongChang 2018.

Just as in their opening day win against Denmark, Belarus got on the backfoot during their second game at the Final Olympic Qualification.

Having just got on the ice after serving a penalty call, Bychawski was picked out by Patryk Wajda steaming down the left and found a chink in Lalande’s armour after 05:35 to get Poland ahead.

Lalande, unstoppable against Denmark, showed a more human side tonight, and was replaced by Karnaukhov after Poland had doubled their lead when Chmielewski stabbed home a rebound to send pulses raising inside the Minsk Arena.

“He did not feel comfortable ahead of the game, but we will check on him tomorrow,” said Lewis without wanting to get further into the reason for the netminder’s discomfort.

The home crowd got their hopes up soon after as Poland started their parade to the penalty box. Krystian Dziubinski served a hooking minor and following a goalmouth scramble, Stepanov fed the puck back to Bailen who hit a slapper past the glove side of Radziszewski to pull one back at 13:51.

Roles were reversed less than two minutes later. Working on a 5-on-3 advantage, Andrei Kostitsyn won the draw at the right circle, before Bailen turned provider, with a pass along the blueline to Stepanov whose strike took a deflection to tie the game at two.

33 seconds later and now on a one man advantage, Graborenko scored on the doorstep after fine work by Stas as Belarus had turned the game to 3-2 to the joy of the 10,820 inside Minsk Arena.

Before the first frame was over, Belarus’ captain Stas made it 5-2 with 28 seconds left ahed of first intermission.

“We got a good start, had a bit of luck scoring our two goals and we had hoped the luck was going to last a little bit longer,” said Poland’s assistant coach Torbjorn Johansson.

“But we took too many penalties and Belarus did well and got in control. After 4-2 it was going to be hard to catch up and we didn’t really have many chances after that.”

A slapper from the point by Andrei Kostitsyn made it five for Belarus at 38:01 which effectively meant game over. Belarus got into cruise control and Poland added a late consolation with 45 seconds left of the game when Pochiecha slammed home a slapshot for 5-3 to deny Karnaukhov’s shutout bid.

As Belarus now gear up ahead of their decider against Slovenia where the winner goes to PyeongChang 2018, question marks loom over the condition of their netminder Lalande, but also on their tendency to concede early in both of their Group D games.

Poland meanwhile can take positives out from this game and will look to improve further in their final game of Group D as they face Denmark with both teams wishing to finish on a winning note after their two respective straight losses.

“The teams we play here are on a new level for many of our players, but we will look for another step forward on Sunday,” said Poland assistant coach Johansson 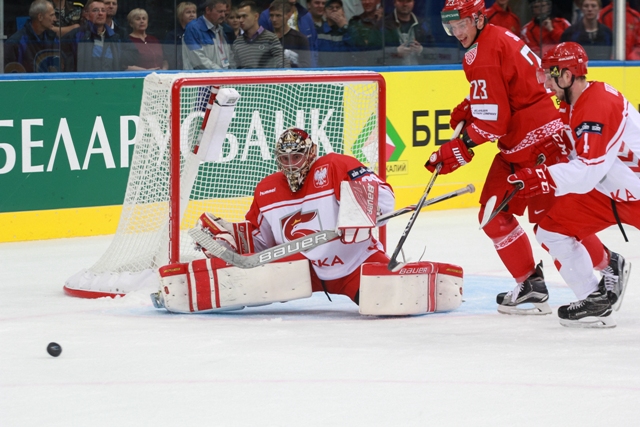