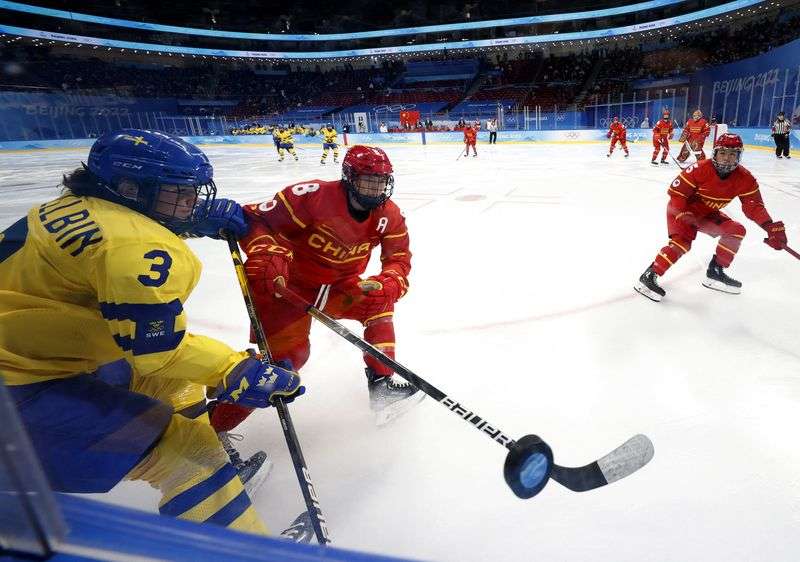 A gritty Swedish team claimed their first win in the women’s Olympic ice hockey preliminary stage on Monday, edging hosts China 2-1 to keep alive their chances of advancing in the tournament.

China’s Kang Mulan got the scoring started with a stellar individual effort early in the first period, but Sweden’s Felizia Wikner-Zienkiewicz responded in the second, beating Chinese goalie Zhou Jiaying on her gloveside on a penalty shot.

Forward Josefin Bouveng found the back of the net a little over a minute later to provide what proved to be the slim margin of victory.

Playing in front of a wildly enthusiastic – albeit limited – home crowd at Wukesong Sports Centre, China pulled their goalie with less than three minutes left in the game but were unable to break through Sweden’s stout defence with the extra skater.

“Our players really showed their grit especially at the end of this game,” Swedish head coach Ulf Lundberg said.

“We wanted to get the first (goal) but China did and we had to be even stronger to turn the game around.”

Sweden will have less than 24 hours rest before they take on Nordic rival Denmark on Tuesday in their final preliminary game of the Olympics.

“It’s tight and I knew it was going to be tight,” said Lundberg. “That’s good for women’s hockey. It’s going to be a tough game tomorrow but we have confidence now after this game.”

The outcome was a bitter disappointment for China, who a day prior had toppled rival Japan in a tense shootout.

“I am so proud of my team,” China captain Yu Baiwei told reporters. “I think we did a great job the last three games and we beat Japan and that was a big win for us.”