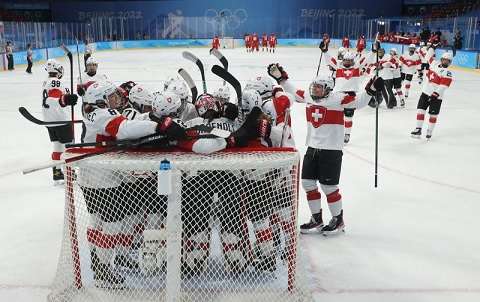 Switzerland beat the Russian Olympic Committee (ROC) 4-2 in a tense and closely-fought quarter-final in the Beijing Olympics women’s ice hockey tournament on Saturday.

Alina Muller scored twice in the final three minutes to take the Swiss into the semi-finals for the first time since 2014, when they won bronze, after the teams were deadlocked at 1-1 heading into the third period before trading goals.

“Everybody fought so hard and everybody wanted to help each other,” said Muller. “In the end it paid off.”

Switzerland will face Canada in the semis on Monday after the Canadians thrashed Sweden nL8N2UM615 11-0 on Friday.

Canada have won gold four times since the women’s tournament was introduced to the Olympic programme in 1998 but lost to arch rival United States in the gold-medal match at Pyeongchang 2018.

After a scoreless first period, Swiss forward Phoebe Staenz flipped a wrist shot past the Russian netminder for the opener.

However, ROC quickly replied as 20-year-old Anna Savonina hit the back bar with such force the puck ricocheted out before officials could be certain it was a goal.

A brief review confirmed the effort counted and the two teams rolled into the third period tied up.

Swiss Dominique Ruegg produced the go-ahead goal midway through the third, moments after a similar effort from ROC captain Anna Shokhina was overturned due to a missed stoppage.

With five minutes left, ROC forward Fanuza Kadirova equalised but Muller put the Swiss back in front 30 seconds later before sending the puck into an empty net for the fourth.

“The emotions are really high. It’s just so beautiful. That’s what we’ve worked for every day, years and years,” added Muller. “That’s just the moment you live for.”

Five members of the ROC team did not take part in the game, including their leading goalscorer at the tournament Polina Bolgareva, who tested positive for COVID-19 this week, according to Russian media.

The team has struggled with absences throughout the tournament, after six players were placed in isolation last week following positive COVID tests.