Phil Esposito a hockey hero the world over 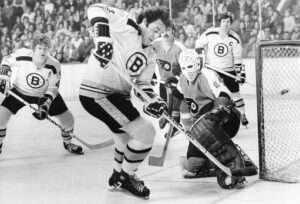 It didn’t matter the situation or the game, once Phil Esposito was on the ice, he wasn’t coming off any time soon.

Ex-Bruins great Phil Esposito, 78, has been a regular visitor to Russia in recent years, traveling there for speaking gigs and sometimes consulting with the Kontinental Hockey League, the country’s top pro league.

“I was supposed to go back over in March,” said Espo, reached at his home in Tampa, “but obviously . . . that got changed.”

Now, provided the world can achieve a post-pandemic norm, the prolific Esposito will head to Moscow in September at the behest, he said, of Russian president Vladimir Putin.

“Because I was awarded this highest award they can give a non-Russian civilian,” noted Esposito. “We’re going to do it now in September, and my buddy Rootin’ Tootin’ Putin is going to present it to me.”

The honor, which Esposito did not identify by name, is likely the Hero of the Russian Federation, given for service to Russia. It’s usually associated with a heroic feat of valor. Russian citizenship or acts performed specifically for Russia are not necessary to win the medal, which is a gold star suspended from a red, white, and blue ribbon.

“I go over there and actually skate with some of the old guys, and have some fun,” said Esposito. “I make a couple of speeches, sign some autographs, go to dinner . . . and they pay me for it. I love it.”

The “Hero” medal has been awarded more than 1,000 times, often to cosmonauts, and at least twice to athletes — including Alexander Karelin, the great Greco-Roman wrestler, and Larisa Lazutina, who won five medals, including three golds, in cross-country skiing at the 1998 Olympic Games in Nagano.

Putin, an ardent hockey devotee who still plays in pickup games, would have been only 19 years old in September 1972 when Esposito and his Team Canada brethren pulled into Moscow for the completion of the historic Summit Series between the nations.

Russia held a 2-1-1 series lead after the first four games in Canada and stood but 20 minutes from clinching the series when they carried a 5-3 lead into the third period of Game 8 (series deadlocked, 3-3-1).

Esposito, then age 30 and the most dynamic goal scorer the NHL had ever seen (back-to-back seasons of 76 and 66 goals), put on a third-period tour de force that led Canada to a stunning 6-5 win.

Less than three minutes into the third, he connected for his seventh goal of the series. Some 10 minutes later, he set up Yvon Cournoyer for the 5-5 equalizer. And with only 34 seconds remaining in regulation, Paul Henderson knocked home a puck that Espo first landed on legendary netminder Vladislav Tretiak.

Shot. Rebound. Score. Take that, Mother Russia. Henderson forever will be remembered for the GWG, but Canada goes home a loser if not for Espo’s broad shoulders.

Tretiak, by the way, was the starting goalie when the Russians faced Team USA at the 1980 Games at Lake Placid. Russian bench boss Viktor Tikhonov, displeased with what he saw of Tretiak in the early going, pulled him in favor of Vladimir Myshkin, setting the stage for the Yanks’ historic win.

“All I can say is,” Esposito recalled decades later about Game 8 in Russia to NHL.com’s Dave Stubbs, “that when they called my name, I was there. And I wasn’t coming off.”

Esposito had a penchant for, shall we say, extending his shifts. In the Summit Series, his protracted flights of fancy took ice time away from a pair of other decent centers, Bobby Clarke and Jean Ratelle, both of whom, like Esposito, also went on to become enshrined in the Hockey Hall of Fame. When Espo had the hot hand, he knew it. Generally, when he was on a roll, teammates were happy to have him keep throwing the dice.

Some of those 35:00 TOI, your faithful puck chronicler reminded Esposito, came because he often turned a deaf ear to calls from the bench to change up on the power play and stayed out there sometimes for the full two minutes.

Esposito was in Russia some eight years ago for the 40th celebration of the Summit Series. The adulation there for the proud son of Sault Ste Marie, Ontario, was of nearly Putinesque levels.

“One time, my wife looked at me and said, ‘I didn’t know I was traveling with Brad Pitt,’ ” Esposito, then 70, was quoted in the Toronto Star. “Sometimes I get a little overwhelmed by the admiration, the adulation, whatever it is. It’s overwhelming. I’m 70 years old and, man, it’s wonderful to still be recognized and known. I think I’m more famous [in Russia] than I am [in Canada and the United States]. Does that make any sense?”

Maybe. If so, sounds like there oughta be a medal for it.