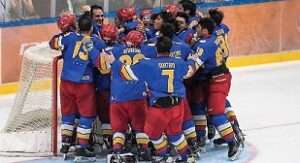 NO LONGER under radar like in the 2017 edition of the Southeast Asian Games, the Philippine national men’s hockey team said it is expecting the road to be tougher as it tries to win back-to-back gold medals in the regional meet happening later this year in the country.

Came out of nowhere to cop the top hardware in the first-ever staging of the sport in Malaysia two years ago, the Philippine hockey team recognizes that it now has a target on its back and that the competition is preparing better against it.

“We have a target behind our back. We’re expecting the other four teams to be stronger, faster and we’re preparing for that,” said Francois Gautier, national team defenseman and executive vice-president of Hockey Philippines, in a talk with media last week at the signing of their memorandum of understanding with cybersecurity company Kaspersky as one of their sponsors for the SEA Games.

“Of course the goal is to get the gold but we know it’s going to be tougher than before. That’s why we made changes in our training. Thailand and Malaysia will be tougher, Singapore and Indonesia are making improvements. We are confident of our chances but we still need to put in the work,” he added, referring to the four other teams seeing action in the competition.

In the 2017 SEA Games, the Philippine hockey team surprised many with its performance, which has since been fondly referred to as “Miracle on Ice.”

The Philippines completed a sweep of its four-game assignment, beating Indonesia, 12-0, in the opener before following it up with 7-2 and 8-7 victories over Singapore and host Malaysia, respectively, in the round-robin phase.

It capped its performance by edging Thailand, 5-4, in a thrilling final match that earned it the gold medal.

Goaltender Gianpietro Issepi was top in his position with a 91.67% save percentage and teammate Paolo Spafford (88.14%) at third.

Mr. Gautier said they will announce the team roster soon, which they have already short-listed to 25 players before trimming it down further.

He went on to say that they will go out on the ice representing the Philippines well and are not leaving anything to chance and are preparing hard.

“We have the players that we need. We want to show we are the best in Southeast Asia. But it’s different on paper and ice. Anything can happen. Two years ago they were giving the title to Thailand but we beat Thailand in the finals,” said Mr. Gautier, who also expressed hope that fans would come out and support them during their matches.

The 30th SEA Games happens from Nov. 30 to Dec. 11. The ice hockey event will be held at the ice rink at the Mall of Asia Arena.