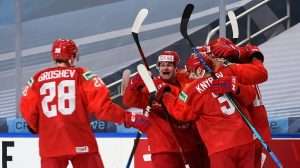 Russia’s Vasili Ponomaryov (#13) celebrates after scoring a first-period goal in Russia’s 5-3 win over the U.S. at the 2021 World Juniors

With an old-school emphasis on creativity and puck possession, Russia kicked off its 2021 World Juniors with a 5-3 win over the rival Americans in Edmonton on Friday.

Vasili Ponomaryov scored twice for Russia and Zakhar Bardakov, Ilya Safonov, and Yegor Chinakhov added singles. U.S. captain Cam York had a goal and an assist, and John Farinacci and Trevor Zegras also scored for the Americans, who couldn’t complete their rally from a 4-1 deficit.

“We had a couple of shifts or a couple of moments where we weren’t playing our best and playing our game,” said Farinacci. “But obviously we had a good comeback and we came back there in the third. I think that’s what we’ve got to stick to as this tournament goes on.”

In a duel of two NHL first-round pick goalies, Yaroslav Askarov (11th overall to Nashville in 2020) got the better of Spencer Knight (13th overall to Florida in 2019). Knight was pulled in favour of Dustin Wolf in the second period after allowing four goals on 12 shots. Final shots favored the U.S. 26-24.

This was the official World Junior debut for a pair of rookie head coaches in Russian legend Igor Larionov and longtime Providence College bench boss Nate Leaman. Both had previous experience as WJC assistants, Larionov in 2020 (a silver medal under Valeri Bragin) and Leaman in 2007 (bronze under Ron Rolston) and 2009 (fifth place under Rolston).

“When we talk about a game against Canada or the U.S., we always talk about puck possession,” said Larionov. “As long as you keep the puck away from them, you can dominate the game. Basically, we tried to take time and space away from them, tried to forecheck, be more aggressive and more determined.”

Expectations are high for these two perennial contenders. Russia is looking for its first gold medal since 2011. The Americans last triumphed in 2017.

The Russians kept the U.S. in check in the early going and drew first blood offensively. Artemi Knazyev fired a shot from the left side that Ponomaryov tipped across his body, fooling Knight for a 1-0 lead at 8:07.

Ponomaryov said he enjoys playing for his new coach: “Right now, I’m feeling insane feelings, just because I feel so good. Igor Larionov is a legend, not only in Russia, but in the world of hockey. I think he will be a famous coach, like [Anatoli] Tarasov, maybe, in the future.”

The U.S. struck back at 14:01. York drifted an unscreened center-point shot that slipped under Askarov’s blocker and trickled in. That caused some jitters for Russian fans, recalling Askarov’s up-and-down play during last year’s silver-medal run.

Early in the second period, defenceman Maxim Groshev sprang Bardakov with a spectacular stretch pass. The Vityaz Podolsk forward has just one goal in 27 KHL games this year, but when he got in behind the U.S. defence, he looked like old-school Alexander Mogilny, snapping the puck through Knight’s legs at 3:12 to make it 2-1.

“I thought where we struggled in the game tonight is where they got pucks in transition,” said Leaman.

The American snipers were getting good looks. Bobby Brink missed an open net and Cole Caufield almost outwitted Askarov with a backhander on an individual dash. Bardakov clipped Brink in the face at 8:38, sending the Americans to their second man advantage of the game, but it fizzled.

Ponomaryov gave Russia a two-goal edge just 28 seconds after Bardakov’s minor expired. In the left faceoff circle, the Moscow native, who had nine points in nine games this season for the QMJHL’s Shawinigan Cataractes, picked off an errant pass by blueliner Jackson Lacombe from the corner, and zinged the puck over Knight’s glove.

The fourth Russian goal was one Knight would have liked to have had back. The Boston College starter left his net to fire the puck up the boards, but Safronov picked it off at the right point. His shot deflected in off the lunging Knight’s blocker at 12:15. Leaman had seen enough and Wolf took over between the pipes.

“When we switched out, it was like, ‘Hey man, it’s not your fault,'” Wolf said. “‘You’re a tremendous athlete, a tremendous person, and you’re always going to bounce back.'”

In the third period, the never-say-die Americans cut the lead to 4-2 at 9:57. Defenceman Drew Helleson stepped in off the line with a wrister and with traffic in front, Farinacci snared the rebound and elevated the puck over Askarov.

With under eight minutes to play, Chinakhov stole the puck from Lacombe at the Russian blue line and got a breakaway, but Wolf stared him down.

With Wolf pulled for the extra attacker, Zegras made it 4-3 on the power play with 2:18 left, dinging a perfect shot in off Askarov’s left post. However, Chinakhov added an empty-netter with 21 seconds remaining to cap off Russia’s victory.

It was another great chapter in one of the hottest World Junior rivalries. Until this Christmas Day opener, the ice had tilted in the Americans’ favour recently. The U.S. had won the previous five encounters dating back to 29 December 2016, including a quarter-final win in 2018 (4-2) and semi-final wins in 2017 (4-3 on Troy Terry’s shootout winner) and 2019 (2-1).

Next up, the U.S. faces newly promoted Austria on Saturday, while the Russians take on the Czech Republic on Sunday. Larionov’s team can’t afford complacency. Last year, Russia opened the tournament with a 4-3 loss to the Czechs in front of a happy Ostrava crowd. We’re only just getting started on the road to 2021 gold.