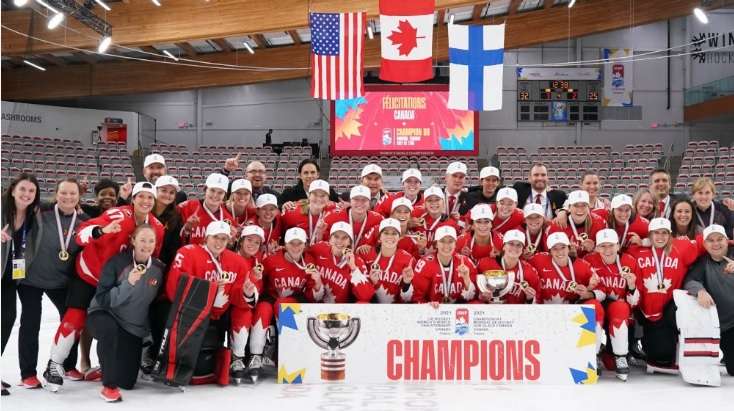 Marie-Philip Poulin scored the golden goal at 7:22 of the first overtime period to give Canada a 3-2 win over the United States. It was Canada’s first gold medal at the Women’s World Championship since 2012 and ended a run of five in a row for their adversaries.

The three-on-three unlimited OT featured end-to-end action and several great chances, but when Brianne Jenner got the puck at her blue line and saw Poulin fly up the middle, the end was near. Poulin drove into the U.S. end and fired a wicked shot over the glove of Nicole Hensley. Poulin celebrated, but the puck went in and out so qucikly that play continued. After a bit of time, though, the scorekeeper sounded the buzzer signalling the goal.

“I kind of knew that it was in, but when we heard that buzzer it was a great feeling,” said Poulin, who is now the only woman to have scored three gold-medal-winning goals in her career (two Olympic gold). “To do it at home, in Calgary, was very exciting.”

“Jocelyne [Larocque] made a heads-up play and rimmed it around the boards,” Jenner described. “Normally, five-on-five, you kind of chip that out, but it’s three-on-three, so I just got going. If you see number 29 open, you just have to put it on her stick, and she does the rest. It was a beautiful shot.”

It was a game as thrilling and exciting as any played between the nations in the 31-year history of women’s hockey at the IIHF. The Americans turned the table on Canada in the first, scoring the only two goals, but Canada stormed back to tie it in the second. The third was a wild affair that featured four penalties–three to Canada–but there was no fifth goal until the overtime.

“To be honest, we were pretty happy coming into the dressing room after the first period,” said Jenner. “You don’t want to be down 2-0, but we were playing our way. We were calm. At that point, we all believed that we could do this.”

“Every time we play them, it’s going to come down to a goal, to overtime. That’s why it’s the greatest rivalry in sports,” said a disconsolate Amanda Kessel of Team USA.

From the opening faceoff it was clear the Americans weren’t going to be caught on their heels and weren’t going to be second to any pucks as they were in the 5-1 loss during preliminary-round play. They got the puck deep and forced Canada to turn and chase, and they initiated the forecheck, causing a headache for the Canadian defence.

After a period of caution at the start, Canada had the better of play, but only briefly and without generating any great chances. And then, in the blink of an eye, the U.S. scored first. Alex Carpenter had one whack at a loose puck in front, and when Claire Thompson didn’t check her, Carpenter got another and made no mistake.

The goal, at 9:55, marked the first time Canada had trailed since the opening period of the tournament, against Finland. Soon after, Canada took a penalty and the Americans struck again. This time Lee Stecklein took a point shot, and there was Carpenter once again to whack the puck in.

The 2-0 deficit sent a shock wave along the Canadian bench, and they had their best sequence of shifts right after. Poulin led a three-on-two into the U.S. end, giving Victoria Bach a superb chance from in close, but Hensley stood tall and made a great save on the shot.

Moments later, off the rush, Rebecca Johnston wired a shot that hit the post and bounced in behind the goalie, but Hensley covered up before it rolled over the goal line.

“We tried to focus a lot on ourselves, making little adjustments for each opponent, but with so much time off from international play, we thought the focus should be on what makes us successful,” said winning coach Troy Ryan. “We got a little bit of that in the first game against the U.S. and just tried to build off that for this gold-medal game.”

Canada came out in the second desperate and determined and managed to take control of the game until the final minute. The hosts got an early power play thanks to a faceoff violation by the U.S. and converted on the chance when Brianne Jenner got to Sarah Fillier’s shot and banged it in at 4:13.

They continued to press, and two minutes later were rewarded again. Poulin came up with a critical faceoff win in the American end, and Larocque’s point shot was beautifully tipped by Jamie Lee Rattray, tying the game.

“I don’t think we were surprised by Canada’s pushback,” said U.S. coach Joel Johnson. “I felt like we just got behind it. They were clearly the better team in the second. We were pretty good in the first. You can look back at one or two faceoffs, or a missed shot on goal, or a tip, and that’s the way it is.”

It was all Canada much of the period, and only the fine play of Hensley kept it a tie game. She made great stops on point-blank chances from Daoust and Jenner, but just when it looked like Canada would go to the dressing room with some confidence, the Americans finished on a high note.

They swarmed Desbiens in the final minute, and although they couldn’t score they did draw a penalty to start the third with a power play. Canada killed that off to start the third, and teams exchanged power plays midway through the period without a goal. The Canadians had two great chances soon after, though, but the puck bounced over Jenner’s stick on one chance from the slot and Johnston wired a shot into the logo of Hensley’s sweater on the other.

Not to be outdone, Desbiens then came to Canada’s rescue. She stopped Hayley Scamurra, who blew by her cover and got a great shot on goal, only to be foiled by the goalie. Moments later, Abbey Murphy had a chance in close but Desbiens held her ground.

And then, with a minute to go, Poulin fed Rattray off the rush, and her shot hit the far post and stayed out. Overtime. And the rest is history.