The Presbyterian Roots of Ice Hockey in North Korea

American and Korean hockey teams meeting in Pyongyang, on the frozen Taedong River, in 1933

When Americans represented Pyongyang with pride.

For all the international attention that the 2018 Winter Olympics in PyeongChang are bringing to the Korean Peninsula’s fractious history, tense present, and uncertain future, there will likely be little talk about the era when a team of American high school students represented the (now North Korean) city of Pyongyang—in hockey. Today, North Korea has thoroughly erased positive depictions of Americans from its capital, but before World War II it hosted a strong American missionary presence, and was the site of a remarkable chapter in sports history.

The first documented ice hockey games in Korea occurred in 1928, when the Japanese Empire ruled Korea, which they called Chosun (1910–45). An organized national hockey league and a national championship followed a couple of years later. In the Chosun Hockey League, which included teams of all age groups, Americans from the missionary communities were instrumental in developing the game. The first national champion, in 1930, was Chosun Christian College in Seoul, a school founded in 1915 by American Presbyterian missionaries. In Pyongyang, the leading team was from Pyongyang Foreign School, the school that served the American community. Hockey was the school’s leading winter sport.

Hockey games in 1930s Korea were elemental, played on outdoor rinks on land and on Pyongyang’s frozen Taedong River. Bitter cold, rough natural ice, ankle-high improvised boards, and wind and snow were normal for the players, and spectators had to stand all game on the edge of the ice, and sometimes on it. Like pickup games on frozen ponds in Canada or Minnesota, the conditions of these early games challenged the dedication of players and spectators alike. 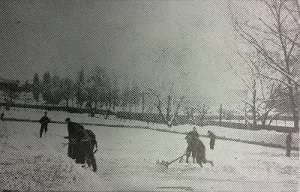 Players clearing snow from the Pyongyang Foreign School land ice rink, with the low boards visible behind them

The most frequent opponent of Pyongyang Foreign School was the Kwangsung School, a local high school just outside of the front gate of the Pyongyang mission. The game results that have survived attest to early American superiority that narrowed rapidly as the Koreans learned the game. In 1933, Pyongyang Foreign School easily won the first game by a ridiculous 37–0, the second game by 16–2. The next year, Kwangsung lost 8–1 in the first game but played a close 2–0 in the next one.

In 1934, the Pyongyang school returned four of its six players from the previous year and added the brothers Samuel H. and Howard Moffett, sons of mission founder Reverend Samuel A. Moffett, who anchored the defense as the starting goaltender and left defenseman, respectively. Pyongyang Foreign School kept the play on Chosun Christian College’s side of the ice for most of the first two periods, but failed to score, and the match ended amid heavy snow, a scoreless tie. For the rest of the decade, however, the collection of high school students struggled to keep pace with Chosun Christian College. In 1936, the record states only that “though fighting a hard, and sometimes brilliant game,” Pyongyang Foreign School “succumbed to the superior weight and experience of the college men, and lost by a wide margin.” 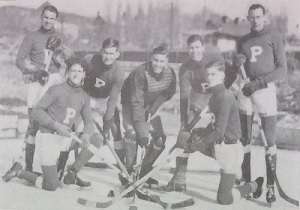 World War II ended this founding era of hockey in Korea. Wartime austerity curtailed athletic competitions in Korea, and the Pyongyang Foreign School closed in 1940, after the U.S. Department of State warned of impending war with Japan. The sport was later revived and supported in North Korea by Chinese and Russian workers in the 1950s.

Today, the places where the Americans of Pyongyang Foreign School once played continue to be at the center of the city’s sports life (even if the school itself is now gone). The two largest athletic arenas in the country, Rungra-do May Day Stadium (capacity 114,000) and Kim Il Sung Stadium (capacity 50,000), are within sight of the location on the Taedong River where the school played in 1933. A large amusement park that opened on the island of Rungra-do in 2012, Rungra People’s Pleasure Ground, overlooks the exact spot. The site of Kwangsung School, on the other hand, is currently occupied by the Grand People’s Study House, the massive library that is the center for the study of North Korea’s juche ideology, and serves as the backdrop for military parades on Kim Il Sung Square. 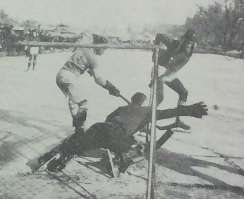 To the south, Chosun Christian College lives on as Yonsei University, one of South Korea’s leading universities and still the country’s top hockey program. Yonsei regularly wins South Korea’s national championship and has produced most of the players in the country’s small professional league.

When the South Korea men’s team and the Unified Korea women’s team take to Olympic ice for the first time in PyeongChang, where they are playing as the host nation, it will be an achievement 90 years in the making, and one that Americans had a role in creating.