Pursuit: From Spain to Sudbury … to play hockey? 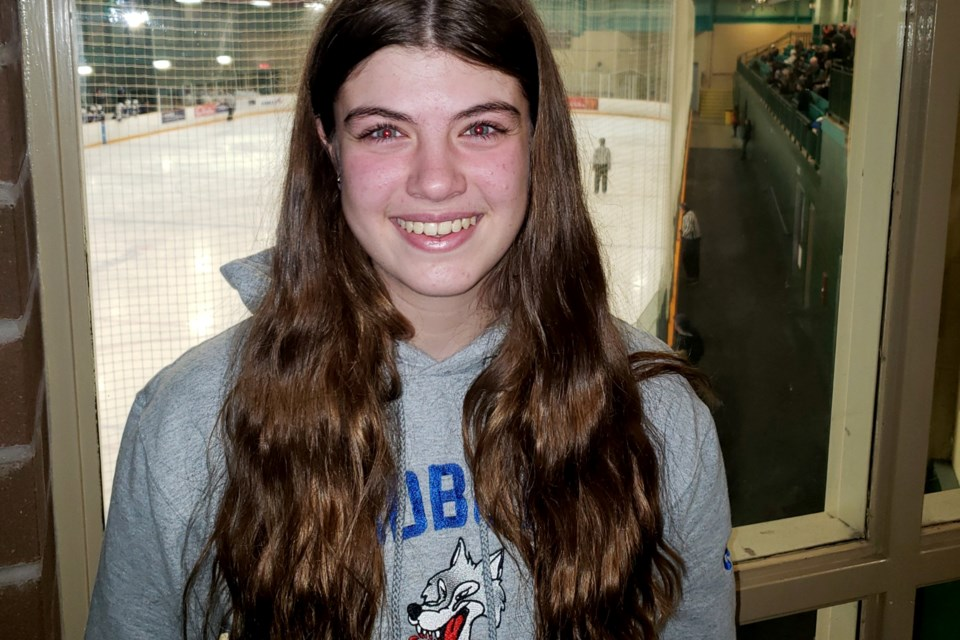 Meet Claudia Castellanos who fell in love with Canada’s game in her home country of Spain and who is spending this winter in Sudbury to play hockey for St. Charles College and the Sudbury Lady Wolves.

Meet Claudia Castellanos who fell in love with Canada’s game in her home country of Spain and who is spending this winter in Sudbury to play hockey for St. Charles College and the Sudbury Lady Wolves.

In the entirety of Spain and its population of 43 million or so, there are approximately 760 registered hockey players, or about 25 per cent of the number of hockey players in Sudbury alone.

The country is home to 16 arenas, the bulk of which are in Madrid, home of Claudia Castellanos.

At least that’s the permanent home of the cheerful young teenager who is spending the winter of 2022-2023 attending St Charles College, suiting up with both the Cardinals and the Sudbury U18 A Lady Wolves.

Make no mistake, despite the rather unique foundation on which her hockey career is built, this girl can play.

Just ask Lady Wolves’ netminders Stevie Levesque and Farrah Farstad, both of whom have seen plenty of the bar-down snipe of a forward who this past summer helped lead her team to the IIHF U18 Division II championship (a nine-team tournament that included the likes of Great Britain, Latvia and Australia), earning the promotion to Division I Group B with Poland, South Korea and Denmark.

Castellanos was just five years old when she first laced up the skates, quickly taking to the game without the countless training advantages that a typical Canadian child might have at the same age.

“When I was nine, I had seen some videos and so I put the puck through a defenceman’s legs and controlled it and shot and scored,” she recalled.

The fact that she converted on the shot will surprise very few of her new teammates. While there is plenty to like about her game, it’s the pace of her shot and the quickness of the release that has already seen her noticed in local settings.

“I got good on my shot when I was little,” she said. “My father made me something on the floor for in-line hockey and I have a net and I would see videos. I worked for hours on getting a better shot.”

As one might well imagine, the challenge in Spain, as it is in so many countries, is the lack of competition for those who somehow take a liking to a sport that flies well under the radar in the land of Flamenco and bull-fighting.

“When I was five, I played against people that were 10 years old or more,” said Castellanos. “They were so big.”

Thankfully, there are at least some options that do not involve crossing the Atlantic in terms of allowing the young woman to enjoy like-minded girls.

“In the summer, I would go to the Netherlands, Germany, Sweden and Finland to play hockey,” she said. “My parents have helped so much.”

Just over three months into her North American hockey adventure, Castellanos could not be more pleased with the results.

“My skating is faster and my stick-handling is better,” she said. “In Spain, you make a move and you get past the players easy. Not here.

“Here, it’s more strong, more physical. I like it here.”

While she is not completely unique (Castellanos explained that two of her friends are currently playing in Boston as well), there is little doubt the dreams she had were definitely not shared by the masses in Madrid.

“When I was 10, I thought about going away for hockey,” she said. “I saw the NHL and wanted to be playing in Canada, skating on the lakes, something like that. In Spain, we have no snow and almost no lakes.”

Such is her passion for the game that Castellanos has now introduced the sport to her entire family, with mom and dad and both of her little sisters giving it a shot. In fact, she suggested that the youngest sibling might yet be the most talented of the crew.

That’s saying something, given the impact that this young player has already made on a pair of local girls hockey teams in Sudbury.