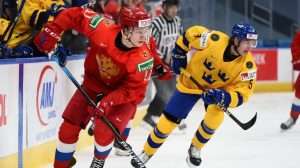 For the third time this season, Russia beat all-comers in Euro Hockey Tour action, winning the Beijer Hockey Games in Malmo, Sweden, and securing top spot in the overall rankings for the season. The four-team event was played in a bubble, with everyone confined to a hotel next to the arena, and the competing countries sent experimental rosters to the behind-closed-doors tournament.

Elsewhere, there was success for Kazakhstan on home ice against Belarus and Russia B in the only other event to take place in men’s senior hockey during the February International Break due the pandemic.

Russia continued its imperious form in this season’s Euro Hockey Tour, winning all three games in Malmo despite once again sending an experimental roster to the competition. As at November’s Karjala Cup, Russia was led by acting head coach Igor Larionov, who more usually works with the juniors. Unlike the event in Helsinki, the Russians were not limited to U20s and took the opportunity to test some older players whose KHL form pushed them into international contention.

However, the man who grabbed the headlines was Nikita Chibrikov. The SKA prospect celebrates his 18th birthday on Tuesday. His debut against Finland on Thursday made him the third youngest player every to represent Russia or the USSR in a men’s international – only Vladislav Tretiak and Alexander Ovechkin were younger when they made their debuts. The Moscow native consolidated his status as one of the top prospects for this year’s NHL draft by collecting a goal and two assists across three games: only Ovechkin was younger when he scored for Russia.

With only 12 KHL starts in his career to date and no major international tournament experience within his age group, Chibrikov was a surprise inclusion on the roster. But the man himself had no qualms about stepping into the red jersey for the first time.

“I have every faith in my ability. This doesn’t happen easily, I had to work hard to make the national team and I put in some good performances in the KHL,” he said after the game. “I didn’t bring any nerves onto the ice, I went out there with confidence that I could do good things for the team. I can’t lie, I was a bit surprised to get a call to the senior national team, but I put a lot of work in, tried to progress my game and so I think I deserved the chance.”

Russia performed well throughout the tournament but saved the best for last. In the third period against the Czechs on Sunday, the Red Machine racked up five goals on the way to a 7-4 victory. However, Larionov’s response was cautiously optimistic rather than euphoric.

“Any win in any tournament plays a big role, it’s important,” he said. “But I wouldn’t read too much into it. This is a big step in these guys’ careers. Three games in four days against strong opposition is a test of skill, character and resilience. Wins like this toughen up our players and make many more things possible. Hockey is a game that gives guys a chance to grow, and these are exactly the type of games that help us hope for a good future.”

Chibrikov wasn’t the only unfamiliar Russian to impress. Zakhar Bardakov, who featured in the recent World Juniors, made a strong contribution to the senior team. Against the Czechs, he had a goal and two assists, following on from a five-game goalscoring streak in the KHL this month. Vladimir Butuzov, who plays his club hockey for unheralded Amur Khabarovsk, tied the Czechs’ Michael Spacek for the tournament’s leading scorer with 4 (3+1) points. Lokomotiv’s Nikolai Kovalenko was also among the top scorers with three points as he led Russia’s recovery from 1-3 down against the Czechs on the final afternoon.

However, there was a shortage of Swedish names on the scoring charts – and a failure to capitalize on chances in the first period of the host nation’s shoot-out loss against Russia proved costly. Tre Kronor head coach Johan Garpenlov challenged the forwards on his inexperienced roster to take the ‘next step’ in the international game.

“We have goalscorers in the SHL, there are many who can score goals,” he said. “It’s about taking your game from your home environment up to this level. And it’s about the individual skill to take the chance when you get it.

“But we have a fairly inexperienced team here. It takes time to get used to [international hockey]. That’s the next step for many of these players.”

There was better news for the Swedes at the other end of the ice where rookie goalie Christoffer Rifalk produced a shutout on his international debut as Sweden blanked Finland 3-0 on Sunday evening.

That result left the Finns in third, edging in front of the Czechs thanks to a shootout win when the teams met on Saturday. The Czech Republic twice went to overtime without winning, then blew a two-goal lead against Russia in a frustrating few days for Filip Pesan’s team.

Kazakhstan hosted a four-team tournament with two Kazakh teams against Belarus and Russia B, with the host nation coming out on top in Nur-Sultan. Two goals from Barys forward Nikita Mikhailis – playing under his father, Kazakh head coach Yuri – settled a hard-fought battle against the Russians in Friday’s decisive match-up.

Exactly a year after an unexpected loss against Poland abruptly ended Kazakhstan’s Olympic qualification campaign, there were changes to the roster for this tournament at the same site. Long-serving dual nationals Nigel Dawes and Dustin Boyd did not feature, goalie Henrik Karlsson was also absent. There was also no place for veterans Talgat Zhailauev and Yevgeni Rymarev while the youthful likes of Daniyar Samat and Adil Beketayev featured on defence for the first time.

“The whole team was the best player in this tournament,” Coach Mikhailis said. “This was a tight-knit, united roster. The players came from various clubs, there wasn’t much time to prepare. I’d like to thank the guys who came from the Kazakh championship, and to the clubs who released their leading players for this tournament. They showed up well and the whole team deserved this win.”

Earlier, both Kazakhstan and Russia proved too strong for a Belarus team preparing for its return to the World Championship top division in the spring. The Belarusians handed debut to two new players, goalie Danny Taylor and forward Francis Pare, both of whom have extensive KHL experience and currently represent Dynamo Minsk. However, the new faces could not lift Mikhail Zakharov’s team, with losses to Kazakhstan (2-5) and Russia (2-4) compounded by a shoot-out defeat against Kazakhstan B in an exhibition game.

Elsewhere, COVID-19 curtailed much of the international program. Casualties included the Kaufland Cup in Slovakia and the planned exhibition games between Germany and Switzerland in Fussen.