Rick Fera: The quiet man who came alive on the ice pad 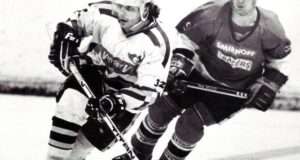 Rick Fera was one of the most prolific points scorers of ice hockey’s modern era.

A man of many clubs and few words, the enigmatic forward knew the route to goal better than most of his peers.

His time at Fife Flyers spanned just two seasons – one he loved, one which drove him to frustration and ended with a long suspension. 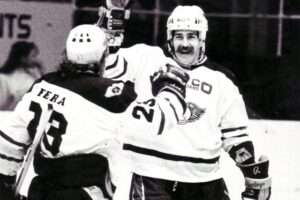 It also contained one singular career highlight – his 1000th point as a pro hockey player.

The moment was captured by Bill Dickman, chief photographer of the Fife Free Press, who profiled him with his arms loft jumping for joy; a special, private moment for an intensely private man.

Fera’s UK career spanned 14 years and nine clubs, and he was the leading scorer at almost each and every one of them.

A native of Keswick, Ontario, he came to these shores from the OHL, and struck gold from the very start. 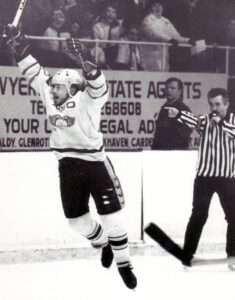 Fera joined Murrayfield Racers in 1985/86 where his partnership with Tony Hand was astounding – his 196 points haul just two ahead of his line mate.

The following season their telepathy took them to an even higher plane as Fera plundered 242 points and Hand 216.

It was the first of several phenomenal partnerships Fera struck up as he roamed, almost nomadically, around the UK hockey circuit.

At Trafford he bagged 229 points, and found a perfect foil in Sylvain Naud, while Basingstoke Beavers saw him team up with two greats, Kevin Conway and Mario Belanger. Fera’s 181 points just pipped Conway on 171 and Belanger on 167.

They were streaks ahead of the rest of the team – Basingstoke’s next highest points scorer was defenceman, and future Flyer, Russ Parent on 74.

At Fife, Fera’s speed and skill were perfectly complemented by French Canadian, Luc Beausoleil – 153 and 124 points respectively – as they spearheaded the team coached by Rab Petrie in 1989/90.

Fera returned, excited at the prospect of lining up with new signing Hilton Ruggles, a sniper of a forward who made his name with Whitley Warriors, but the club opted for a massive U-turn in mid-summer.

Out went Ruggles even before setting foot in Fife, and in came two Czechs Jaromir Korotvicka and Lubos Oslizo. The switch to European hockey didn’t work and was quickly jettisoned.

In came former NHLer Steve Gatzos, long past his peak, and the partnership with Fera misfired completely.

New coach, the no nonsense Mike Fedorko, split them up, and dumped Fera in the third line, playing relatively inexperienced young local Brits up ahead of the Canadian.

When the player was injured he found himself de-registered to make way for Darcy Cahill – a player with a big reputation who didn’t live up to the billing.

Isolated, Fera kept his counsel as results tanked, and the team hit rock bottom. Fedorko, Cahill and company all departed.

But his nadir came in January when a season soaked in utter frustration finally exploded when Fera – one one of the mildest mannered guys on the circuit – exploded.

He was thrown out of a game against Durham. Hustled to the sin bin, he threw a chair at Wasps’ player, Ian Cooper.

A brief moment of mayhem resulted in a ban for the rest of the league league campaign.

The following season he headed south to Trafford where his wandering journey around British ice hockey continued.

Three decades on, his remarkable scoring feats still stand the test of time – a true reflection on a player blessed with skill, pace and a deadly finish.