Road to the 2019 CCOA: Chinese Taipei 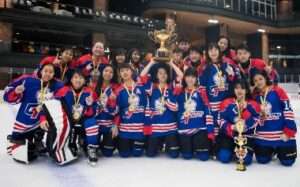 If there’s one team that historically has been the team to beat at the IIHF Women’s Challenge Cup of Asia (CCOA), it’s Chinese Taipei.

Expectations may seem high for the team that has been put together to represent Chinese Taipei at the 2019 CCOA this April in the United Arab Emirates, but for head coach Andrew Yin, the focus will be on using this competition as a development opportunity.

“For this year’s CCOA, I’m trying not to put any pressure on the players, as this tournament is really for development of the younger players in Taiwan and giving the players that didn’t make the world championship team a chance to compete at the international stage,” said Yin.

Two such players are Hsin Jung (Kelly) Li and Hsin Yu (Amanda) Wang. Both made their international debut last season at the 2018 World Championships and both are looking to improve their offensive skills through playing in the 2019 CCOA.

“I’m looking forward to seeing how the other teams play hockey and meet new friends, but most of all I hope we have a good performance at the CCOA,” said Li. “Especially I hope I can score or assist for our team.”

Li has been playing hockey for three years, having taken up the sport after being introduced to ice skating as a college freshman.

Wang, who started out with roller hockey before taking to ice hockey, will also be attending the 2019 World Championships.

“I’ve never scored a goal in an international tournament before and I scored my first ever goal just two months ago,” said Wang. “It was such a wonderful feeling so I want to have that feeling again on the international stage.”

Both Li and Wang are in their twenties, with Li being one of the program’s older players at the age of 25. The teams that Chinese Taipei has iced at IIHF tournaments have been noticeably young (even when not purposefully sending their U18 team, as they did with last season’s CCOA), with the average age usually being around 19 or 20.

Why so young? Yin says that the female hockey program in Chinese Taipei didn’t really kick off until about three and a half years ago, so most of the girls that started playing or joined the national program then haven’t yet finished school.

“I am one of the few female players who already entered the workforce,” said Li. “I’m trying to keep playing as much as possible, even though now I have to work. Most of the players are students and after they graduate from college they might be going to work, so some players quit playing ice hockey.”

Yin says that 90% of Chinese Taipei’s female hockey players are still in school, and notes that there may be a variety of reasons for why some quit once they reach Li’s age.

“The players that quit, from my understanding is not because they enter the workforce, it’s because of the younger players coming up and pushing them out of the national team, and since there aren’t many girls club team games, they stop being competitive.”

The sole female hockey club in Chinese Taipei is Girl Power, which used to be part of the now defunct three-team Chinese Taipei Women’s Hockey League (CTWHL). The other two teams folded several years ago, one because of coaching issues and the other because it was a junior high school girls team that had most of its players graduate.

Now, Girl Power, which Wang and other young national team players play for, competes against junior and senior high school club teams in national tournaments, playing around 10 to 15 games a year.

National program players like Li who are over the age of 20 mostly just practice with the national team, which gets several ice times a week and occasional exhibition games against high school teams.

This year’s Chinese Taipei CCOA team will have several Girl Power players on it, along with several of last season’s gold medallists. With so many new and young players competing, the event has the potential to identify Chinese Taipei’s up and coming stars, as it did with Hui Chen Yeh at the 2015 and 2016 CCOA.

After making her international debut at the 2015 event and scoring five goals and three assists, Yeh (who is now 19 years old) eventually become the country’s all-time leading scorer. She had 14 goals and 22 points at the 2016 CCOA, and 11 goals at both the 2017 and 2018 World Championships, along with a few assists at each.

“I believe [the CCOA] is important for the development of women’s hockey in Taiwan as it gives most players hope for the future and it keeps players in the game,” said Yin. “What I’m really hoping to accomplish at the tournament really is to let everyone try their best and have fun. The result will take care of itself.”