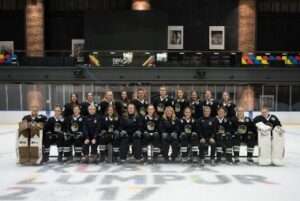 Abbey Heale, at just 17 years old, has already played for New Zealand’s senior women’s ice hockey team (the Ice Fernz) at two IIHF World Championships. Also on her resume is the IIHF Women’s Challenge Cup of Asia (CCOA), which she competed in in 2017, and will be competing in for a second time in 2019.

Heale represents the first group of young female hockey players from New Zealand to fully experience the country’s U18 Women’s Development Program, which is aimed at building a feeder system for the senior team and preparing young athletes to compete at a higher level, such as with the Ice Fernz.

While the girls in the program got an opportunity to play against teams from other countries, the program’s leaders recognized that they needed an opportunity for their players to compete internationally on a larger scale.

“The New Zealand U18 women’s team was looking for a competition arena, and the CCOA seemed to be a good fit,” said team manager Philippa Kaisser, who also mentioned that the program’s leaders initially had to overcome resistance to the idea of needing an opportunity for the U18 team to compete internationally.

Today, the CCOA is the highlight of the U18 Women’s Development Program, and this season will mark New Zealand’s third appearance in the event. Their first appearance was in the 2017 CCOA, which they won. They came second in the Top Division of the 2018 CCOA.

“The CCOA is a great tournament for our team as it is run along similar lines to a World Championship and thus gives the girls experience of an international competition that they wouldn’t otherwise get until competing on the senior women’s team,” said Kaisser.

Players who have gone on to compete with the Ice Fernz have seen the benefits of playing in the CCOA. “They have already been overseas to an IIHF-run ice hockey tournament and so have more of an idea of what will happen there,” said Kaisser. “Some of the players have only played at a small, club level, so have no idea of the huge arena that is international ice hockey.”

While Heale played in her first IIHF World Championship with the Ice Fernz just days before competing with the U18 team in the 2017 CCOA, the goal is that players will instead first get accustomed to the international stage at the CCOA. Players such as Hannah Cross, Rina Watt and Harriet Fuller will be making their first international appearance with the Ice Fernz this season after a few years in the U18 Women’s Development Program.

This season, there are many players who made the U18 Women’s Development Program for the first time, with just seven players returning from last season’s team. The roster includes goaltender Lilly Forbes, who had an impressive 93.59 SV% and 1.97 GAA through three games at the 2018 CCOA.

While prominent goal scorer Beth Scott is not on the roster this season due to spending time in Canada, Heale is returning after a year away from the team, and is expected to be a significant source of offence for them. She was a successful goal scorer at the 2017 CCOA and has proven her goal scoring capabilities in the New Zealand Women’s Ice Hockey League (NZWIHL).

While the CCOA continues to serve as a great avenue for New Zealand to develop its young players, the goal is still to enter the IIHF’s U18 Women’s World Championship program. This year, head coach Angelique Mawson and assistant coach Michelle Cox had approximately 35 eligible players to select their team from, and they anticipate that next year that number will increase to 45.

“While we are very close to fulfilling the criteria for inclusion in the IIHF [U18 Women’s] World Championship program, we are not quite there yet as far as female player numbers in the age group category is concerned,” said Kaisser. “Although numbers are steadily rising.”