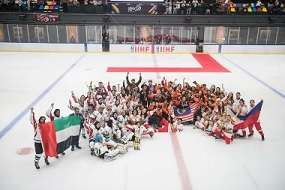 While Abu Dhabi has hosted the Men’s CCOA three times before, this will be a a momentous event for the country’s women’s program.

“It means the world honestly, having the CCOA in Abu Dhabi is really a big deal for us,” said UAE women’s team captain Fatema Al Qubaisi. “All the past years we’ve been hoping for this to happen.”

For Al Qubaisi, this will be an especially important event; she waited over a decade and a half before there was an opportunity for her to play hockey.

“My parents used to take us to the ice rink once a week as a weekend activity,” said Al Qubaisi. “All I really wanted was a hockey team, but it took another 16 years of patience [before] they finally had one for ladies.”

As Al Qubaisi explained, the past few years have seen an increase in women’s hockey programs in the Middle East. Kuwait will be making their IIHF women’s debut at the 2019 CCOA and two non-IIHF members, Saudi Arabia and Bahrain, have recently started women’s programs.

“I’m very proud of my team to have achieved so much to reach to a point that we are hosting something so big, something serious like the CCOA in our country,” said defender Mariam Al Mazrouei. “This is our chance to prove that this sport means so much to us as girls of the UAE, the first women’s ice hockey team in the Middle East.”

While the UAE became a IIHF member in 2001, the country did not have a women’s program until 2010. They made their first IIHF competition appearance in the 2014 Women’s CCOA Division I tournament, finishing in last place.

The team did not play in the CCOA for a few years following their debut, but returned to the competition in 2017. They improved on their inaugural performance, finishing second to last and notching their first ever IIHF win, a 6-4 victory over India.

In the 2018 Women’s CCOA Division I tournament, they rose to second place, beating India and the Philippines and losing to eventual champion Malaysia. The UAE team will be competing in the Division I tournament again in 2019, and look to continue to improve upon their previous results.

“[In 2018] we got second place in Malaysia, that was an honour, to have our team play as one … [Our goals in 2019 are] to put on the ice what we’ve practiced during the past years in the game, play as one unit,” said Al Qubaisi. “And of course we hope to win.”

Al Qubaisi and Al Mazrouei, along with other players such as Fatima Al Ali, have been with the national team program since its first CCOA appearance in 2014 or even earlier. Before joining the program, most of them knew about hockey from films such as Mighty Ducks or from their parents’ previous experiences with the sport.

The country’s 78 registered female hockey players, as well as the majority of the national team, mostly play on teams in the UAE’s capital city of Abu Dhabi. However, with the recent formation of a new team in Al Ain, Al Qubaisi anticipates that they will see more players coming from other parts of the country to join the national team.

The national team has received a lot of attention over the last few years with the rising popularity of forward Al Ali and the team’s trip to North America for the NHL’s Hockey is For Everyone month this past February.

However, for Al Qubaisi, who has dropped a ceremonial puck in front of 18,000 fans at a Washington Capitals game and travelled around the world to play a sport she loves, the experience that she names as her favourite hockey experience is a reminder of the joy these players have just being able to play a sport they love.

“The best [experience] of course was the time I first ever put gear on after so many years of waiting.”

Al Qubaisi may or may not realize it, but her and her teammates are the pioneers of women’s hockey in their country, and the 2019 CCOA will no doubt play an important role in the growth of the sport in the Middle East.