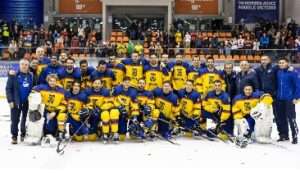 Romania celebrates after steamrolling past Iceland 10-1 at Olympic Qualification Group K on home ice in Brasov to move into the next round in Nottingham, Great Britain

A trip to Great Britain awaits Romania after blowing away their opponents during the 2019 Men’s Olympic Qualification Preliminary Round 2 Group K playing on home ice in Brasov.

They sealed their progress to the next round after crushing Iceland 10-1 in the showdown for top-spot in the group K. With its head coach and half of the roster from Corona Brasov, the Romanian national team celebrated their victory in front of 1,200 at Olympic Ice Hall in Brasov on Sunday night. With three straight wins, 43 goals scored and only three conceded, progress was never in doubt.

Romania will next compete at the 2019 Men’s Olympic Qualification Preliminary Round 3 Group J in Nottingham, Great Britain. Played between 6-9 February 2020, they will take on hosts Great Britain, Hungary and Estonia.

“We are very excited. We are always really nice to play against much better teams than yourself. I am really looking forward to it because I am pretty sure it will be a big arena and a lot of fans, British fans are also really loud, so it will be a really nice experience. It´s also a really good way to prepare for the World Championships,” said Romania´s captain Roberto Gliga.

Eight different scorers with four goals scored in power play sealed a convincing victory against Iceland in Group K. Tournament top-scorer Balazs Peter tallied 2+3. Zsombor Molnar had two goals and an assist, while blueliner Attila Goga and forward Csanad Fodor both got a goal and two assists each.

During the 2017 IIHF Ice Hockey World Championship Division II Group A in Romania´s Galati, Iceland had blanked Romania in a shock 2-0 victory. Kristjan Kristinsson was one of Iceland´s scorers during that memorable win. Two and half years later, he once again faced Romania who since moved up to another level and is now in Division IA while Iceland play in Division IIB

“It was hard, really hard tonight. They are used to play a lot of games. We in Iceland play a 16-game league, so the stamina is different. Romania was really strong on the puck. They were just really good,” said Kristinsson.

Despite having scoring 33 goals against Israel and Kyrgyzstan during Olympic Qualification in Brasov, the Romanian team had been slow in getting into gear during their two previous games. Against Iceland, they had to wait until 11:11 before they got their opener. Former forward turned defenceman, Pavlo Borysenko unleashed a wrister from the blueline right at Iceland´s bench which found its way past a screened Dennis Hedstrom in the Iceland net.

Iceland´s Bjarki Johannesson was serving a two-minute minor when less than four minutes left of the frame Anton Butochnov poached in front of the net from a Fodor feed. Peter tapped home 3-0 and soon after scored his second of the evening 23 seconds before the buzzer for the first intermission. Gliga cheekily tapped the puck forward when winning the draw and hit a pass across the crease to Peter for slot home Romania´s fourth unanswered strike.

Iceland who during yesterday´s day off had paid a visit to Dracula´s castle in nearby Bran, showed little bite during the middle frame as Romania steamed ahead.

Molnar added Romania´s fifth at 22:55 before Romania converted on three straight powerplay goals. At 29:04 Goga lifted in 6-0 from the slot after Hedstrom had made the initial save. Romania´s seventh came just over two minutes later. Goalie Patrik Polc got an assist, as he picked out Peter waiting on the offensive blueline who fed the puck to Molnar who converted. Yevhen Yemelianenko then boomed home a one-timer from the top slot for number eight at 37:33.

Heading into the third period, Romania continued to win their battles and kept pressing Iceland in their own zone. Eduard Casaneanu and Balazs Gajdo both had attempts in the slot before Fodor fired home 9-0 at 45:53. Fodor then weighed up his options behind Hedstrom´s net, picked out an onrushing Vitali Kirichenko who hit home via the post for double digits at 51:16.

Iceland netted a late consolation when Kristinsson won a battle along the boards with Yemelianenko as Egill Birgisson ruined Polc´s shutout bid with 2:45 left of the game.

With an intensive league schedule ahead, Romania now keep fingers crossed that their current crop of players will stay injury-free ahead of the next round of Olympic Qualifiers. In Nottingham they also hope to be boosted by Daniel Tranca who missed the Iceland game due to illness as well as Tamas Reszegh and Szilard Rokaly, a duo who played a key role when Romania won gold at the 2019 World Championship Division IB.