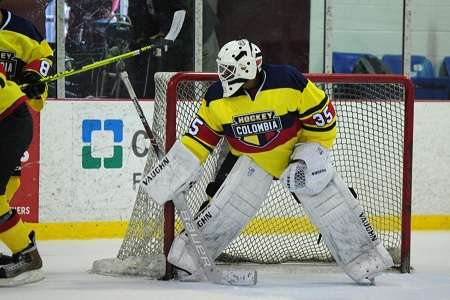 Hodgson in net for Team Colombia. Courtesy of Rudy Hodgson

Playing for your home country is always a special honor. Senior hockey player Rudy Hodgson knows this all too well.

A dual citizen for Colombia and the United States, Hodgson played hockey for Team USA when he was younger. And in the past few years, he has been able to play for Team Colombia as well. This week he gets the chance to do that again.

On Oct. 10, Hodgson left to play with Team Colombia in the LATAM Cup, which is hosted by the Florida Panthers of the National Hockey League and takes place from Oct. 14-17 at Panthers IceDen in Coral Springs, Fla.

The tournament includes teams from all over Latin America and the Caribbean that come to battle each other for a spot at the International Ice Hockey Federation (IIHF) tournament, which takes place in Germany next year.

Hodgson first got involved with Team Colombia a few years ago through a family member, but his hockey-playing days began long before that.

Hodgson began playing hockey at the age of four and never looked back. A Los Angeles native, he grew up an LA Kings fan and played for their junior’s team, as well as in high school. All those things led him to where he is now — a goaltender for DePaul’s club team.

“I can’t really imagine a time in my life when I wasn’t ice skating or playing hockey,” Hodgson said. “So, I got involved through there, played high school, played club for the Kings and was fortunate enough to play not only for Colombia, but for Team USA for a couple years, so I’ve been really lucky to have a successful career so far.”

Growing up a Kings fan, Hodgson looked up to Jonathan Quick, the main goaltender for the team since 2008 who helped the team win two Stanley Cups in 2012 and 2014. While playing for the King’s junior team, Hodgson was able to practice with Quick at times and learn from him as a fellow goaltender.

As a goaltender, Hodgson is the last line of defense on the team before the puck crosses the goal line into the net, but that was not the position he planned to play while growing up.

Hodgson became a goaltender around the age of seven or eight when his team’s goaltender didn’t show up. He was thrown into the position by his coach and picked up the position quickly. While he never intended to play the position, it has worked out for him in the end.

“Hockey’s taken me around the world,” Hodgson said. “So, it was a happy accident that I just kind of ran with and tried to make the most of it for sure.”

Now as a senior on the DePaul club hockey team, Hodgson serves as one of the unofficial leaders on the team.

“Whenever he speaks up or has something to say, people listen,” AJ Grzbek, Hodgson’s DePaul teammate and fellow goaltender, said. “He’s always been there for me, he’s there for everybody. Everybody loves him. He’s a great teammate, and for Team Colombia to have him, that’s just perfect, it works great.”

With the hope of continuing to play hockey after he graduates, Hodgson works hard on and off the ice to develop his game as much as he can, but he still tries to have fun and enjoy his senior year.

“He’s always the guy that wants to do extra stuff and learn extra things,” head coach Dan Wood said. “And there’s no surprise that he’s able to make this team, and I’m sure he’ll do great when he gets out there.”

When Hodgson first began playing with Team Colombia a few years ago, the team was not federalized by the government or considered a national team by the IIHF. That changed when Colombia joined the IIHF in 2019 and were able to play against other national teams.

Now, hockey is progressing in Colombia, but there’s still more room for growth. Hodgson is excited to be a part of that and help the game grow even more by playing with Team Colombia next weekend.

“At the end of the day, I’m there to win,” Hodgson said. “But I think the biggest thing that I would want to take away from this tournament is knowing that I helped contribute to the growth of hockey in Colombia and continue to do so with my style of play and hopefully with a little bit of success in there too.”