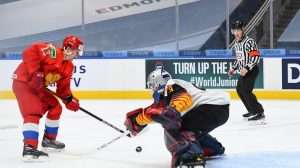 Vasili Ponomaryov scores the opening goal on a short-handed breakaway

Vasili Ponomaryov caught the Germans napping midway through the opening period, scoring a beautiful short-handed goal and leading Russia to a 2-1 win over Germany.

The result puts Russia in the semi-finals, to face the winner of the Finland-Sweden game while Germany now goes home after a valiant effort in the face of quarantine troubles.

Russia is now 8-0 all time against Germany in U20 play, with a 43-5 goals differential.

The Germans played a solid defensive game and had some quality scoring chances but just couldn’t capitalize. Despite entering the game with the most power-play goals in the tournament (8), they also failed to take advantage of four power plays in the first 40 minutes.

Ponomaryov scored his goal at 9:15, taking a breakaway pass from Semyon Chistyakov and beating Florian Bugl with a nice deke to the forehand.

It was a tough pill for the Germans to swallow as they had a bit of bad luck a few minutes earlier when Tim Stutzle beat Yaroslav Askarov with a shot glove side, only to see the puck clang off the post and ricochet into the corner.

Stutzle had another first-rate chance early in the second. Florian Elias made a fantastic, diving pass off a faceoff to Stutzle in the slot, but his quick shot was stopped by Askarov.

The Russians made it 2-0 at 8:27, capitalizing on a giveaway by the Germans behind their own goal line. Yegor Afansiev got the puck along the boards and made a perfect pass to Danil Bashkirov in front, and his quick shot beat Bugl to the stick side.

Joshua Samanski had another great scoring chance from in front, but again Askarov was that much better with the save.

Ther Germans got on the board early in the third thanks to two great plays by Florian Elias.First, he stripped Rodion Amirov of the puck as Amirov was turning to exit the zone. Then, in one motion he rifled a shot past Askarov at 3:24 to make it a 2-1 game.

That got the team going, and moments later J-J Peterka had a nice chance, followed by Jan Munzenberger. A game which Russia seemed in control was now very much up in the air. Peterka then snapped a nice pass to Elias, whose quick deflection went off the crossbar and out of play, mere inches from tying the game.

Elias got one final chance while his team was short-handed, but again Askarov was solid to the play and preserved the win.