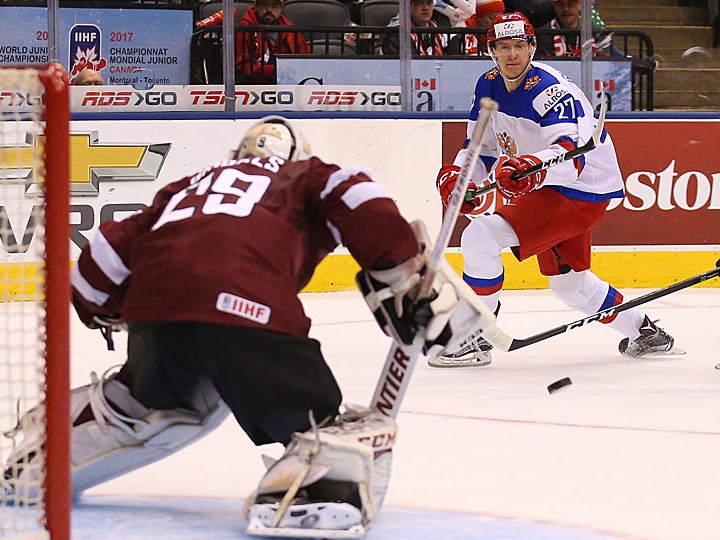 Russia scored three unanswered goals in the first period en route to a big 9-1 win over Latvia. With the win it improves to 1-1 while Latvia falls to 0-2.

The Russians were right back at it less than 18 hours after leaving the ice last night, a 5-3 loss to Canada. They scored early to take all hope out of the Latvian chances and didn’t let up.

“We got back to the hotel quickly last night, got some food and a good night’s sleep,” captain Kirill Kaprizov said. “We were well rested for today.”

“We scored three quick goals and after that controlled the game,” said Yakov Trenin of Russia. “Yesterday [against Canada] we were nervous. It was our first game, and there were 18,000 people, but tonight we were much better.”

“We felt more comfortable today, and once the goals started to come it was fun,” Kaprizov added. “Today, it all started to come together for our line. We had a bit of luck and were moving the puck well.”

Damil Yurtaikin opened the scoring when he drove hard down the left wing, outmuscled Rihards Puide, and made a nice deke on Gustavs Grigals at 5:33.

Latvia had a great chance midway through the period with a four-minute penalty to Polunin, but although they had some chances, they were shut out. When Polunin came out of the box, he broke up the middle and beat Grigals with a shot along the ice between the pads to make it 2-0.

Pavel Karnaukhov made it 3-0 at 17:39, giving Russia all the goals they’d need. Grigals couldn’t control Vadim Kudako’s point shot, and Karnaukhov was there to swat in the rebound.

Coach Eriks Miluns inserted backup goalie Denijs Romanovskis for the second period, and he was beaten on his first shot, a close-in one-timer by Kaprizov off a nice pass from Vorobyov.

Latvia’s Rudolfs Balcers finally converted on a power play at 3:42 when he made a nice toe drag and shot to the short side, beating Vladislav Sukhachyov to make it 4-1.

Just 39 seconds later, though, Russia restored its four-goal lead when Polunin got his second, and 43 seconds after that Kirill Belyayev scored from in front. That spelled the end for Romanovskis, and Grigals went back into the blue ice for Latvia.

The Russians added three more in the third–all on the power play–to add salt to the wound, Kaprizov with two as well as an assist on a Trenin goal.

Both teams now enjoy a day off before returning to action on Thursday. Russia will play the United States in a much-anticipated matinee while Latvia plays Canada in the evening.