Russia shoots down Czechs for bronze 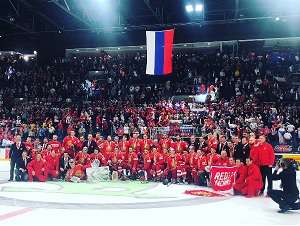 Ilya Kovalchuk and Nikita Gusev scored in the shootout to give Russia the bronze medal in a hard-fought 3-2 victory over the Czech Republic on Sunday.

Kovalchuk roofed a short-side backhander past Czech goalie Simon Hrubec and the elusive Gusev scored five-hole. Russian netminder Andrei Vasilevski was perfect in the shootout, denying Czech defenceman Filip Hronek on the final attempt. The Vezina Trophy nominee from the Tampa Bay Lightning shone as shots favoured the Czechs 50-36, including an 18-6 gap in the third period.

Russia’s last medal was also bronze, from Cologne in 2017. It’s their first medal under second-year head coach Ilya Vorobyov. The Russians are still looking for their first gold medal since Minsk 2014.

The long Czech drought at this tournament continues. The Czechs haven’t won the gold medal since shocking Russia 2-1 in the 2010 final in Cologne, and their last medal of any shade was 2012’s bronze.

In front of 9,085 spectators at Ondrej Nepela Arena, Mikhail Grigorenko and Artyom Animisov scored for Russia in regulation time. Michal Repik and Dominik Kubalik replied for the Czech Republic.

Czech coach Milos Riha observed the time-honoured tradition of playing his back-up goalie in the bronze medal game. Hrubec’s only previous 2019 game was the 7-2 win over Norway. Russian coach Ilya Vorobyov had other ideas, as Vasilevski appeared for the eighth time in 10 opportunities.

The result offered some consolation for Russia which won eight straight games before suffering a 1-0 semi-final loss to underdog Finland.

The Russians got off to a good start. At 13:00, Grigorenko tipped Sergachyov’s left point shot through Hrubec’s pads to make it 1-0 with his fourth goal of these Worlds.

Just 41 seconds later, the Czechs struck back. David Sklenicka’s stretch pass found Repik at the Russian blue line for a breakaway and he fired it through Vasilevski’s five-hole.

Now the tide turned in favour of the Czechs, who had been outshot to this point. Kubalik made it 2-1 for the Czechs. Jan Kovar set him up in the left faceoff circle up from behind the net, and the 2019 Swiss NLA scoring leader snapped it home, high to the glove side, for his sixth of the tournament at 18:34.

It took just 37 seconds for Russia to make it 2-2 in the second period. Gusev picked off Jan Kovar’s failed clearing attempt and got the puck to Artem Anisimov, who fired a shot that tipped off the stick of defenceman Radko Gudas and past a surprised Hrubec.

Still, the undaunted Czechs looked more inspired for much of the middle frame, although Gusev came close, ringing one off the iron. The Russians mounted a late charge, but even when Ovechkin nicely set up his Washington teammate Yevgeni Kuznetsov, the 2018 Stanley Cup playoff scoring leader, on the rush, there was no go-ahead goal.

Early in the scoreless third period, Vasilevski slid over to rob Radek Faksa, set up on an odd-man break by Michal Repik. With under three minutes left in regulation, Gusev hustled past multiple Czech defenders before feeding his partner in crime Nikita Kucherov by Hrubec’s right post, but the 2019 Art Ross Trophy winner put the puck off the side of the net. Vasilevski also stoned Faksa with his glove before the buzzer sounded.

Gusev missed the best chance of overtime with under two minutes left when Kucherov found him all alone by the side of the net. The SKA St. Petersburg forward who had four points in last year’s 5-4 Olympic gold medal win over Germany couldn’t convert.

The Czechs have historically had good fortune against the Russians in bronze medal games. They won at both the 1997 Worlds and 2011 Worlds. They also beat Russia in the 2006 Olympic bronze medal game in Turin. But history didn’t count for much here. In the preliminary round this year, Russia beat the Czechs 3-0, thanks to Vasilevski’s 23-save shutout.

Surprisingly, the Russians have yet to win gold when Kovalchuk serves as captain. The 36-year-old sniper, who was named MVP at the 2018 PyeongChang Olympics, also wore the “C” with the silver-medal teams of 2010 and 2015.