Russia tops the charts in Perm 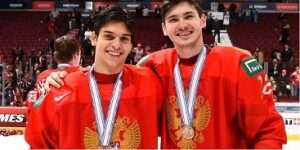 Grigori Denisenko (left), who was named best forward of the tournament, and Kirill Marchenko (right) helped Russia win the tournament on home ice in Perm

Russia’s juniors came out on top in the first U20 Four Nations’ tournament of the season in Perm. The young Red Machine edged in front of the Czech Republic after both teams finished on six points. Russia topped the table by virtue of its opening 4-1 victory over the Czechs, who came second after wins against Finland and Sweden. The Finns secured third place with a 4-2 win against Russia on the last day, while Sweden’s solitary point arrived in an overtime loss against its Nordic neighbour.

The first game of the contest proved to be decisive. Russia’s win over the Czechs tipped the balance in the tie break. The victory owed much to the revived combination of Pavel Dorofeyev, Grigori Denisenko and Ivan Morozov, which had a hand in three of the goals. The trio represent different KHL organisations – Magnitogorsk, Yaroslavl and St. Petersburg respectively – but have often played together at different age groups within the national program in Russia.

“We played all three games on a single line,” Dorofeyev told FHR.ru. “I’ve played with them since we were kids so we can do a lot together. Of course, it’s good to get back to playing with them again after a bit of a break.”

Russia’s second game was a tight affair. Maxim Sorkin’s first-period goal was enough to beat Sweden 1-0 and the CSKA prospect admitted his team made hard work of seeing off the Swedes.

“In the first two periods we couldn’t wake up, our game didn’t flow, the puck wouldn’t go to the stick,” he said. “It was only in the third period that we played more or less OK. Luckily we got a goal in the first period, albeit a bit of a freakish one, and managed to close out the win.”

That result ensured that Russia would top the group regardless of the outcome against Finland and the final gameday saw the host nation defeated 2-4 by the Finnish lions. For head coach Valeri Bragin, who went into the tournament talking about the need for many emerging players to prove themselves at the start of the selection process for this season’s IIHF World Junior Championship in the Czech Republic, it was a somewhat frustrating finish to an encouraging competition.

“The most important thing is that we won [the tournament],” he said. “We played well, including against Finland where we had two very good periods. We tried to play aggressive, attacking hockey but our finishing let us down a little in the end, plus we allowed some soft goals at the other end.

“As far as the roster is concerned, we’ll need to analyse that more closely. Nobody dropped out of contention. Sure, some players were a bit brighter than others but, on the whole, the team was fairly even.”

The individual awards saw Daniel Dvorak (CZE) take the best goalie prize, Santeri Hatakka (FIN) claim best D-man and Grigori Denisenko (RUS) named best forward. Samuel Salonen (FIN) was the leading scorer in the competition. Dvorak, a 19-year-old from Hradec Kralove, was the Czech man-of-the-match against Russia, where his 27 saves kept his team in the game for long periods. He also played in the win over Sweden that secured second place and established himself as a serious challenger to Lukas Dostal for the #1 role on the Czech Junior roster.

Russia’s decision to stage the tournament in Perm, a city in the Northern Urals often described as the Easternmost in Europe, was a new departure. The local team, Molot-Prikamie, has not played in the Russian top league since 2005/06 and the 6,000-seater Molot Arena rarely sees international stars, past, present or future. The games were taken here as part of the Russian Hockey Federation’s efforts to broaden the geographical spread of hockey across the country, and the initiative got the thumbs up from the players.

“It was a good set-up for us here,” said Denisenko. “The fans really got behind us, it was like having a sixth skater on the ice. To be honest, I didn’t expect such an enthusiastic audience for hockey here.”

Head coach Bragin added: “The whole tournament was played in a great atmosphere. We made sure that people in this region could fall in love with hockey and I’m glad we came to play here. I hope we managed to entertain the fans. I’d like to say a big thank to everyone for the lively support we had in the arena. It was like a breath of fresh air, and it gave our players strength.”