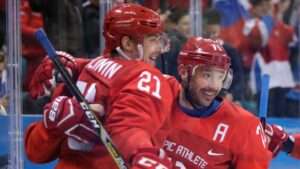 The Russian hockey team is starting to look a lot more like the Olympic favorite everyone expected it to be.

Minnesota Wild prospect Kirill Kaprizov led the way Friday with a hat trick in an 8-2 rout of Slovenia as the Russians rebounded from a surprising 3-2 loss to Slovakia in their opener.

“We’re the same team as we were in the first game,” said Ilya Kovalchuk, who finished with two goals and an assist. “Just first game we play good first five minutes, today we play all 60, so that was the difference.”

The team, officially competing as “Olympic Athletes from Russia,” scored twice on the power play after failing to do so in the opening game.

The Russians will next play the United States on Saturday in a game likely to determine who finishes at the top of the Group B standings.

“Obviously tomorrow we’re expecting a better game and more competitive. The United States is always the United States, so it’s going to be tough,” former Buffalo Sabres forward Mikhail Grigorenko said. “Our top players scored, so that was important. Now they have that confidence. I think it’s a good thing, especially before those important games ahead of us.”

Slovenia was coming off a 3-2 overtime win over the Americans, but was overmatched on Friday. The Russian win was the largest margin of victory in an Olympic men’s hockey tournament since Canada beat Austria 6-0 in 2014.

Sergei Mozyakin got the Russians started with a hard shot off Pavel Datysuk’s pass at 18:23 of the first period, and it took only 22 seconds for Kovalchuk to make it 2-0.

The Russians scored four times in 12 minutes during the second period on goals by Alexander Barabanov, Ilya Kablukov, Kaprizov and Kovalchuk.

Former Detroit Red Wings forward Jan Mursak — who got two goals against the United States — scored Slovenia’s first goal off a pass from Miha Verlic in the second period. But Kaprizov scored two more in the third as the Russians pulled away.

Slovenia forward Ziga Pance made it 8-2 late in the game.

Russian goaltender Vasili Koshechkin allowed one goal off eight shots before being replaced after the second period by Ilya Sorokin, who made six saves off seven shots. Luka Gracnar allowed eight goals off 34 shots in Slovenia’s goal.

Even though the International Olympic Committee has barred Russian athletes from competing under their own flag because of doping at the 2014 Sochi Games, there were plenty of Russian flags in the stands. In the first period, there were two large banners depicting the face of Russian President Vladimir Putin and messages of support for the country’s hockey team.