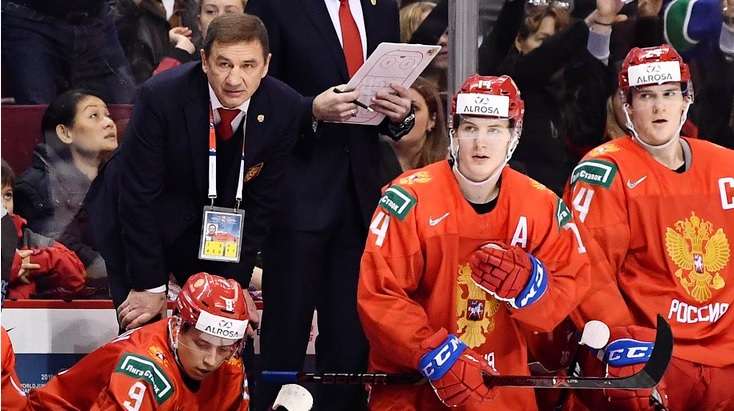 It’s an unfamiliar Russian line-up at this championship, with just 10 of the players named on Valeri Bragin’s roster having experience at this level. That leaves 16 debutants, and two as yet unnamed additions for the Red Machine.

There is less NHL representation than usual, as well. At the time of writing, just seven places on the team go to players based across the Atlantic. The two vacant roster spots are being held in the hope that the likes of Sergei Bobrovski, Nikita Gusev, Andrei Vasilevski or Kirill Kaprizov might become available after the first round of the Stanley Cup play-offs, but the backbone of the team comes from the KHL. As such, it’s a chance to assess the depth of Russia’s program in the last major tournament before the 2022 Beijing Olympics.

Goaltending is a sore point for Russia this year. At present, the Red Machine has nominated just two goalies and hopes to add a player from the NHL once the first round of the play-offs is done. However, Igor Shestyorkin and Anton Khudobin are both unavailable despite neither the Rangers nor the Stars making it to post season.

Domestic commentators noted with alarm that none of the teams that got to the final stages of the KHL play-offs had a Russian netminder as first choice, with only SKA’s Alexander Samonov seeing action in the final four. He was largely an understudy to Sweden’s Magnus Hellberg, and his team did not progress to the final. The 25-year-old looks set to be Russia’s first choice, at least at the start of the competition, as he makes his World Championship debut. Ivan Fedotov, who recently sealed a move to CSKA Moscow, is the second choice. The 24-year-old helped Traktor Chelyabinsk reach the play-offs this season and made his debut for Russia’s senior team during the Euro Hockey Tour.

The third spot might go to Dynamo Moscow’s Ivan Bocharov, currently in Riga awaiting a possible call-up. However, the progress of the Tampa Bay vs Florida series could open the door for either Andrei Vasilevski or Sergei Bobrovski to join the team. Similarly, Ilya Sorokin could sneak through the door before the May 26 deadline if his Islanders fall to Pittsburgh in the first round (series currently tied at 1-1). However, as things stand Riga 2021 represents the chance of a lifetime for an emerging Russian goaltending talent to establish himself as a leader for the national team.

Traditionally, Russian rosters are stacked with NHL forwards and rely on KHL defencemen. This year, though, it’s the other way round. Five of the seven NHLers confirmed on Russia’s roster ply their trade on the blue line, while neither Mikhail Grigorenko nor Alexander Barabanov would be widely recognised as the biggest stars in Russia’s hockey firmament.

There is a wealth of international experience from the NHL contingent, with three of them – Vladislav Gavrikov, Nikita Nesterov and Artyom Zub –featuring in the gold medal roster at the 2018 Olympics. Gavrikov and Zub took the opportunity to build on that success with a move across the Atlantic, Nesterov returned to the NHL this term after two further seasons and a Gagarin Cup win with CSKA.

Two further NHLers, by contrast, have played almost all their careers in North America. Ivan Provorov is back at a World Championship for the first time since 2017, when he won a bronze medal in Cologne. Philadelphia’s Nikita Zadorov, who graduated the Lokomotiv school and played one season in Russia’s Junior Hockey League before he too crossed the Atlantic. His first World Championship appearance came in 2019 with a bronze in Bratislava.

On a strikingly young team, Lokomotiv Yaroslavl’s Alexei Marchenko is the oldest player on the D. The 29-year-old played in North America from 2013-2017, mostly within the Red Wings organisation but returned home in time to join the Russian Olympic roster in 2018. After winning a Gagarin Cup with CSKA in 2019, he moved on to Lokomotiv and enjoyed his most productive season with 24 (7+17) points in 2020/21. Marchenko’s Lokomotiv team-mate Rushan Rafikov is one of many World Championship debutants on the roster.

The other KHLers on the team are Metallurg’s 23-year-old Grigori Dronov, who makes his senior international debut here, and Igor Ozhiganov, 28, who earned his first championship call after playing under Bragin at SKA this season.

At the time of writing, Russia has just two NHL forwards on the books, although there is a free space on the roster should the likes of Gusev or Kaprizov become available. Both Alexander Barabanov and Mikhail Grigorenko have Olympic gold, but the two have had rather different experiences this season. Grigorenko returned for a second look at the show after previously spending three seasons with Buffalo and Colorado. However, a single season in Columbus did not promise great things and there is strong talk that he will return to CSKA in the summer. Barabanov, meanwhile, made his NHL debut with Toronto but struggled to make an impact and was traded to San Jose. Life with the Sharks seems to suit him better – he had 7 (3+4) points in nine games before the end of the season.

That strong finish is likely to give Barabanov a spot on the first line for Russia alongside two key players from CSKA Moscow. Konstantin Okulov and Maxim Shalunov were big players in the Army Men’s run to the Gagarin Cup final. Okulov tied Avangard’s Sergei Tolchinski in the post season scoring race with 20 (6+14) points, while Shalunov’s 12 goals made him the top sniper in the play-offs. They’re set to form the first line alongside Barabanov.

Grigorenko has also been working with CSKA players in practice, lining up alongside team captain Anton Slepyshev and World Championship rookie Pavel Karnaukhov.

Two other lines have a strong Petersburg accent. Emil Galimov, Ivan Morozov and Anton Burdasov, all primed for their World Championship debuts, played together consistently for SKA last season, while Artyom Shvets-Rogovoi and Vladislav Kamenev are established team-mates for club and country. They were expected to be joined by Yevgeni Timkin, but his injury problems mean Ak Bars’ 20-year-old talent Dmitri Voronkov is likely to complete the combination in the first games of the championship.

At present, Tolchinski seems to be held in reserve despite his post-season prowess with Avangard. There are also questions about Timkin’s fitness after he was injured in Euro Tour action last week. Another SKA prospect, Vasili Podkolzin, is with the team but has not been officially added to the roster pending the results from the first round of the NHL play-offs.

Valeri Bragin has ample experience of international competition after a decade behind the bench for Russia’s U20s at the World Juniors. His record at that level is more than respectable – gold in 2011, four silvers and a bronze, plus one more silver as assistant in 2005 and gold at the U18s in 2004. Along the way, he has worked with many of these players at the start of their international careers. In addition, as head coach of SKA St. Petersburg this season, Bragin has been in charge of several of the Russian team on a day-to-day basis.

However, the 62-year-old’s record in adult hockey is not overwhelming. He had a short, unimpressive spell behind the bench at CSKA Moscow in 2012 before returning to the Juniors, and his SKA team this season seldom looked like a big contender for honours. Moreover, Bragin’s experience as head coach of the senior national team was also limited. He took charge of two of the four stages of the Euro Hockey Tour, sharing the workload with Igor Larionov as the U20s used the Karjala Cup to prepare for their World Championship. With that Olympic defence less than a year away, Russia’s hockey chiefs will be hoping that Bragin shows enough to reassure everyone that he is the man to lead the team in Beijing.

Normally, the question for Russia is what colour medal it will win. This time, though, there is uncertainty. Heavy losses to the Finns and the Czechs in the last games of the Eurotour have sewn doubts about the strength of this roster, with the goaltending a particular concern. Moreover, the usual reassuring influx of NHL names is not happening this year, contributing to a sense of unease among Russian fans. It’s clear there is plenty of talent on this roster, but it’s less obvious that the players on display have the big-tournament nous to thrive when the pressure builds up.

On the other hand, every country at the championship has its own question marks after a season of tough challenges to keep the games on the ice. Russia has an advantage over many European nations in that its national championship was played in full and without interruption – and at a high standard. After unprecedented worldwide disruption at both club and international level, a full KHL season could be a decisive factor in steering the Red Machine through any turbulence in Riga. The bookmakers rate Russia as the favourite to lift the cup, and it’s certainly reasonable to expect this team to have a big say in where the prizes go.