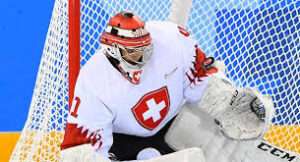 Schelling, the 2014 Olympic MVP, surpassed Canada’s Kim St-Pierre as the all-time wins leader with the ninth of her career. The Swiss have won three straight games in Korea.

Of her record, Schelling said: “I don’t pay attention to it at all. I’m not here to break any records or anything. I’m just here to be the best goalie I can be for the Swiss team and make history with the team.”

Alina Muller scored her Olympic-leading sixth goal and added an assist to help ensure Switzerland will face the fourth-place Group A team in Saturday’s quarter-finals – either Finland or the Olympic Athletes from Russia. After suffering its first loss, Sweden will battle the winner of the Finland-OAR game in the other quarter-final.

Muller, 19, is now three goals away from the single-Olympics goal record of nine set in 2010 by Canada’s Meghan Agosta and Switzerland’s Stephanie Marty.

Phoebe Staenz got the third-period winner, plus an assist, while blueliner Christine Meier had two helpers. For Sweden, Anna Borgqvist had the lone goal.

“I think there’s an advantage coming from Group B,” Staenz said. “In Sochi we lost all the group games, won the most important game and got into the semis and the bronze medal game. Two wins got us a medal, and now we have three wins already. It’s huge for our confidence, we know we can do it. We know we can win and there’s nothing to worry about, rather than going into a huge game without winning anything.”

It was the first time Switzerland and Sweden have faced each other in Olympic competition since the dramatic 4-3 Swiss victory on 20 February, 2014 in Sochi. That gave Switzerland its first Olympic hockey medal since the Swiss men got bronze in 1928 and 1948.

In front of 3,545 spectators at the Kwandong Hockey Centre, Switzerland outshot Sweden 47-34. It was a physical, penalty-filled affair in which every goal came on the power play.

“We need to work on our defence,” said Borgqvist. “We also have to be better when we’re going to score. I think we are too easy when we go into the zone. We don’t shoot enough, we don’t crash the net. But I know we have enough to beat either the Russians or the Finns.”

During a scoreless first period, both Schelling and Swedish starter Sara Grahn looked sharp. Schelling had to be alert to foil Sabina Kuller’s shot off the rush and close-in rebound attempt. After Muller slipped past fellow teen and Swedish defender Maja Nylen Persson, Grahn made a great glove save.

Staenz was shaken up after taking a Muller slapper off the inside of her knee during Switzerland’s first power play, but kept going.

In the second period, the Swiss dialed up the pressure, hemming Sweden in for long stretches. Staenz kept battling, putting the puck off the post on a shorthanded rush and drawing a minor on the same sequence after Lisa Johansson upended her.

On the ensuing power play, Muller finally broke the deadlock at 13:51 with a devastating one-timer from the bottom of the faceoff circle, set up slyly by Meier.

In the final minute of the second period, Grahn kept Sweden in it when she stoned Lara Stalder on a shorthanded breakaway.

The Swiss continued to sacrifice their bodies in the third period. On the penalty kill, Stalder was shaken up along the boards in a heavy collision with Swedish forward Hanna Olsson’s posterior.

The pain increased moments later when Borgqvist went to the front of the net to tip Olsson’s feed high past the Swiss goalie at 7:45.

But the Swiss struck back less than four minutes later. They took a 2-1 lead on the power play when Meier skimmed a perfect pass to Staenz on the doorstep and she tipped it into the open side.

“It was important,” said Staenz. “We had quite a few power plays. Every now and then the shot came through there and I couldn’t get my stick on it. And then finally I just told myself: ‘It’s going to come there, you have to be ready for it.’ And finally I was!”

And that was all it took. Sweden pulled Grahn for the extra attacker with just over a minute left, but to no avail.

“When I scored I felt we had a good chance to beat them, but they’re a good team and when they scored on that PP it was tough for us,” said Borgqvist. “But we’re a good team too, we kept fighting and we were so close to making it 2-2.”