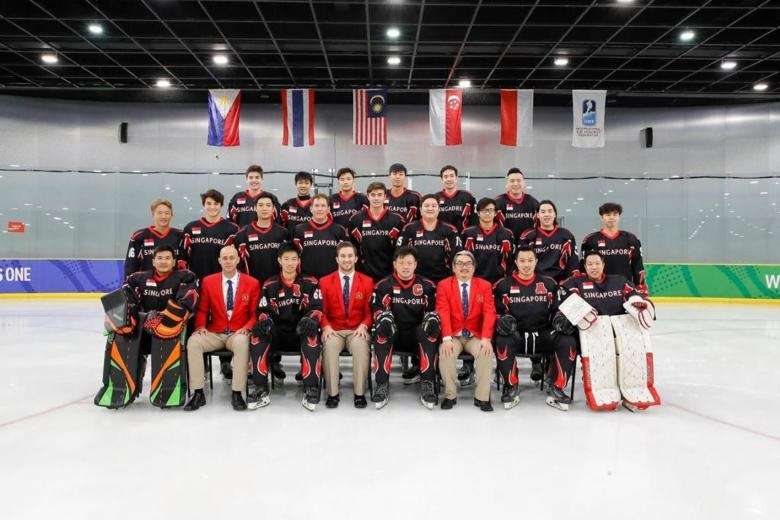 By Laura Chia – The Straits Times

After winning a historic silver at the 2019 SEA Games in the Philippines, national men’s ice hockey captain Daniel Chew was keen to continue the team’s upward trajectory.

But the pandemic stalled their progress for nearly two years, with the team returning to the ice only late last year.

But things are starting to pick up again, as they will make their world championship debut next month.

The tournament had been scheduled for 2020 and later 2021 but was cancelled because of the pandemic.

This event is the lowest tier of the International Ice Hockey Federation’s (IIHF) world championship competitions, with the teams typically split by world ranking. There is also a promotion and relegation system between the four divisions. The winners of Division IV will be promoted to Division IIIB.

Chew, who is self-employed, told The Straits Times it has been a long wait and he hopes the team can come home with a medal.

The 42-year-old, who has been with the team since 2008, said: “It’s a great step for us because it shows that a small country like us can play in the world championship and that’s quite an achievement.”

This will also be Singapore’s first time competing in an international competition. They usually play only in the IIHF Challenge Cup of Asia against other similarly lower-tier Asian teams.

Singapore Ice Hockey Association development director Joewe Lam is aiming for a podium finish for the team, but also wants the 20 players making the trip to learn from playing against higher-ranked opponents.

Lam, 33, said: “We can’t always be playing against teams in the region. We need to go out and play against better teams, learn how aggressive they are and how good they are, then apply it to our game.

“But although they haven’t been playing for a while, they have to stay positive and can’t be scared just because they’re playing better teams.

“Our team has a good mix of youth and experienced players so they balance each other out and they just have to play their game and see where it takes them.”

One of the players, Ryan Goh, felt this could be a big turning point for the sport.

The 18-year-old, who will be enlisting for national service after the tournament, said: “This will bolster our confidence as a team and help us take on bigger challenges. I’m excited but also nervous. We were a bit rusty when we returned to the ice but most of the team are quite fit and we got back our flow after a while.

“The rest of the teams will be in the same situation so the playing ground will be quite even and if we just do our best and play hard, I think we stand a fighting chance.”

Teammate Aaron Kok, who has been in the team since 2017, added that he hopes their stint will help fellow Singaporeans understand the sport better.

The 45-year-old, who works as a delivery man, said: “The sport is very interesting and fast-paced. We want to prove that even though we’re a small country, we do train hard and can make it to the world stage. Hopefully this attracts more people, especially the next generation, to learn the sport.”

To support the team’s trip, which is mainly self-funded by the players, visit this website.