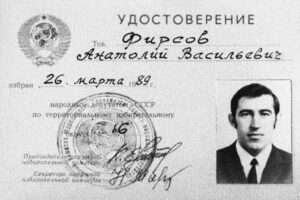 The 2018 and 2019 Hall of Fame inductions of 1970s international superstars Alexander Yakushev and Vaclav Nedomansky – and especially the 2016 induction of Sergei Makarov, arguably the world’s most talented player in the early 1980s after Wayne Gretzky – were received warmly by historians and international fans. There is a renewed sense of optimism that a few more previously overlooked international greats will get their due in the coming years.
If you’re looking for the best international players of all-time who didn’t play in the NHL during their prime, look no further than the 30-year period from 1960 to 1990. That’s because since 1990, most of the best European players at any given time have been in the NHL – and no all-time greats have built a Hall of Fame resume outside of the world’s top league. Before 1960, though there was a burgeoning international scene, the caliber of play was not up to NHL standards. Too many nations’ hockey programs were in their infancies, so pioneers such as Vsevolod Bobrov, Vladamir Zabrodsky and Josef Malecek were not close to the world’s best players and miss this list as a result. The six players below, however, have resumes that can stand up to the Hall of Fame standard and thus deserve serious consideration.

All of these international greats had extensive careers in their home country, but their most important work was done in international tournaments. Most fans consider the Canada Cups, World Cups and 1998 through 2014 Olympics to be the only “best-on-best” tournaments, and technically that’s true, but before the top European players arrived in the NHL, any major tournament was still best-on-best to them, save for a few Swedes and Finns already in the NHL – only Canada and the U.S. weren’t sending their best. (For the purposes of this story, the World Championship, Olympics, Summit Series and Canada Cups are considered major tournaments.)

Anatoli Firsov
(USSR, 1958-74)
A phenom and a favorite of legendary coach Anatoly Tarasov thanks to his dedication to training, Firsov almost has too many accomplishments to name. He was a six-time Soviet league all-star, three-time MVP (the award only existed in the second half of his career), voted top forward in three major tournaments, led four tournaments in scoring and finished with 117 points in 67 international games. Seth Martin, a star goalie for Canada in the 1960s, said no other Soviet player could compare with Firsov. Indeed, it was the Soviets’ 1960s dominance that fueled Canada’s complaints of, “but those aren’t our best players, let’s see them go against our pros” which led to the 1972 Summit Series, and Firsov was the key to that dominance. (He didn’t play in 1972 in protest of Tarasov’s ouster as coach of the national team). Firsov was a versatile forward who could play the wing and center, and he was not deficient in any area: he was both the fastest skater and fastest thinker on the ice, he could score as well as set up teammates, he played a powerful game down low, was responsible defensively, killed penalties and could hold his own physically. Describing his playing style, he once said, “If the opponents treated me fairly, I never touched them. But if they played dirty, I always kept my stick on the level of their teeth,” while making a cross-checking motion. 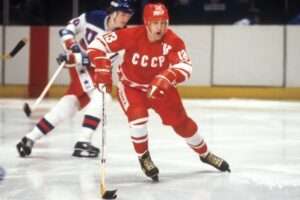 Boris Mikhailov
(USSR, 1962-81)
No Soviet star has epitomized the “Canadian” style of play like Mikhailov. The Swedish newspaper Aftonbladet described him as “tough, mean, speedy, probably not flashy, but without doubt the sweet dream of any coach.” Mikhailov, who captained the Soviets, was physical, had boundless energy, and could be downright dirty – he had famous battles with Canadian players over the years. Tarasov recounted a World Championship in the 1970s: “Mikhailov really went after the Canadians the way they went after our players and beat them all over the rink…Canadians became much less aggressive every time he was on the ice.” Even though he was seen as the lesser-skilled grunt of his line with Vladimir Petrov and Valeri Kharlamov, Mikhailov was loaded with high-end skill. 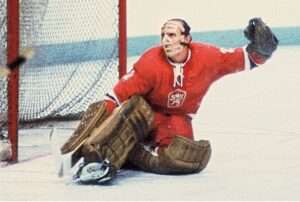 Jiri Holecek
(CSSR, 1961-81)
They called him ‘Kouzelnik,’ meaning “magician.” Many believe Holecek, not Vladislav Tretiak, is the greatest European goalie of all-time. The evidence in favor: Holecek was named the best goaltender or all-star six times at major tournaments, all of which Tretiak was also competing in. That’s the same number of similar honors won by Tretiak, and Holecek did this with a much less dominant team in front of him. This is not to say the Czechoslovaks were unsuccessful, though – they won three World Championship gold medals with Holecek, plus a silver and bronze at the Olympics. For his part, Holecek agrees with his supporters, feigning no modesty. He called Tretiak “average” and said he’d only be about fifth-best in the Czech league. After watching Canada’s Martin during the ’60s, Holecek adopted the spread kneeling position and achieved great success with it. The 1970s Soviets were his favorite opponents because of how technical and tricky they were. He loved to watch their plays develop and predict who they’d eventually pass to for the finishing move – his mobility served him very well against this style of play. 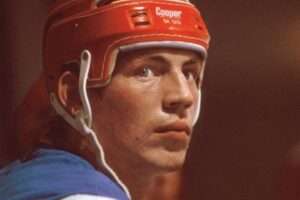 Valeri Vasiliev
(USSR, 1966-84)
Before the emergence of Slava Fetisov, Vasiliev was the Soviet Union’s top defenseman, and it wasn’t close. He was a Soviet league all-star eight times in nine seasons from 1973 to 1981, winning top defenseman five times in that span. During that same period, he was also named to five World Championship all-star teams and was named best defenseman three times. Although he posted respectable offensive stats, it was defensively and physically where he shone. Firsthand accounts from his time are rife with descriptions of his punishing physical play and smart technical defense. The excellent international chronicle, Kings of the Ice, details it well: “Strongman Vasiliev eventually transformed into a refined technician. He was able to determine quite well when to get physical with his adversary and when to concentrate more on the puck, when to forecheck aggressively and perhaps even con his rival into skating alongside him for a while until the right time came to smash him into the boards and when to recognize an opportunity to steal the puck using nothing but his stick…he truly enjoyed making his opponents feel like rabbits facing a boa constrictor.” 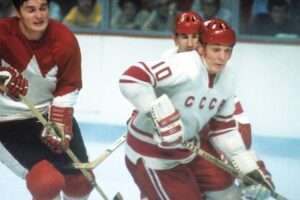 Aleksandr Maltsev
(USSR, 1967-84)
Maltsev, a tiny finesse center who could also play either wing, was a fixture on Dynamo in the Soviet league from 1967 to 1984, finishing top-six in scoring five times, with one scoring title, seven all-star teams and one MVP award (he was a five-time finalist). He was even more impressive internationally, where he led three major tournaments in scoring and finished third in points three other times. He totalled 198 points in 150 international games and was named to a remarkable six all-star teams. He was somewhat of a free spirit – not a big fan of strict on-ice systems, he preferred creativity and unpredictability. Maltsev was not a big publicity seeker either, and his name quickly faded once he retired, but his talent and accomplishments are worthy of the game’s highest honor. 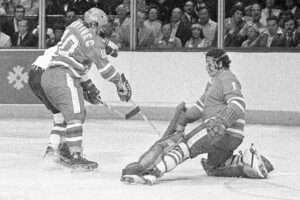 Vladimir Martinec
(CSSR, 1967-85)
Although a pure winger and not a center, you could say he was the Czechoslovaks’ answer to Maltsev: a small finesse player, born in the same year, with similar domestic achievements: seven times top-six in CSSR league scoring, one scoring title and four MVP awards. Internationally, it was difficult for any non-Soviet to rack up massive point totals and achievements, but he still managed to lead one tournament in scoring, finishing top-six four times in all. Martinec scored 133 points in 117 international games, making four tournament all-star teams. Known as ‘The Fox,’ Martinec’s calling cards were creativity and resiliency. As Jyrki Laelma recounts in his 1979 book, Winter Sports Heroes, “Martinec’s significance is demonstrated by the fact that every time the Soviets had difficulties with Czechoslovakia, he has been the man who has been taken out first. In 1973, Vasiliev hit him in the neck with his stick and he was carried off on a stretcher; in 1974, Gennady Tsygankov cross-checked Martinec in the face; in 1975, Vladimir Petrov butt-ended him in the mouth. After that, (Czechoslovakia coach) Jan Starsi had had enough: ‘The Soviets always talk about how cleanly they play compared to the professionals. But I would like to know why Martinec always ends up in a hospital when CSSR is leading a game versus the Soviets.’ ”