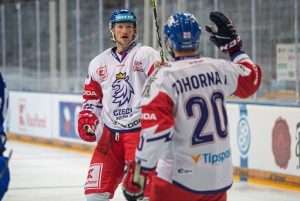 In its last friendly double-fixture ahead of the upcoming 2021 IIHF World Championship, Slovakia ice-hockey team got beaten twice by its traditional rival, the Czech Republic, 2-0 on Thursday and 2-1 on Friday.

Making up a federation for several decades and then splitting in 1993, the Czech Republic and Slovakia still have excellent relations but have also developed a strong sports rivalry. The Czechs usually have the upper hand in most encounters across various sports, especially in ice hockey, and they confirmed the pre-game expectations on both recent occasions.

On Thursday, the Czech Republic decided the outcome of the first friendly match against Slovakia with two goals late in the game. The young visitors were the more dangerous team but failed to convert on their many opportunities. Instead, Rudolf Cerveny opened the score in the 54th minute on a 2-on-1 fastbreak and 45 seconds later, David Tomasek scored winner to make it 2-0. The Czech goalie Roman Will’s 24 saves turned into a shutout.

In the second fixture on Friday, the Slovaks were close to opening the score in the first period but the video footage of Peter Cehlarik’s redirect showed that the puck bounced off both posts and the Czech goalie Kvaca made the save. Instead, the home team struck in the second period when Adam Musil converted on a pass from behind the goal and sent a shot between the visiting goalie’s legs.

The Slovaks managed to answer two minutes later when the 20-year-old Martin Fasko-Rudas converted on his breakaway opportunity, scoring his first goal for the national team in his career to level the score.

The Czechs went ahead again in the third period after Andrej Sustr’s one-timer found its way into the back of the net flying in just under the crossbar, bringing the 2-1 victory to his team as Slovakia failed to capitalize on a late 5-on-3 powerplay with Cehlarik’s promising attempt bouncing off the post.

“Our Thursday match was better. Our skating was off today and we got under pressure as a result. Our effectiveness is lacking at the moment, we are having trouble scoring goals. We need to stay more active. We will now have to make final adjustments before the championship as we are expecting skilled players arriving from finished leagues from all over Europe,” said Slovakia assistant coach Michal Handzus after the game.

The IIHF World Championship starts on May 21 in Latvia.