Slovakia on to quarter-finals 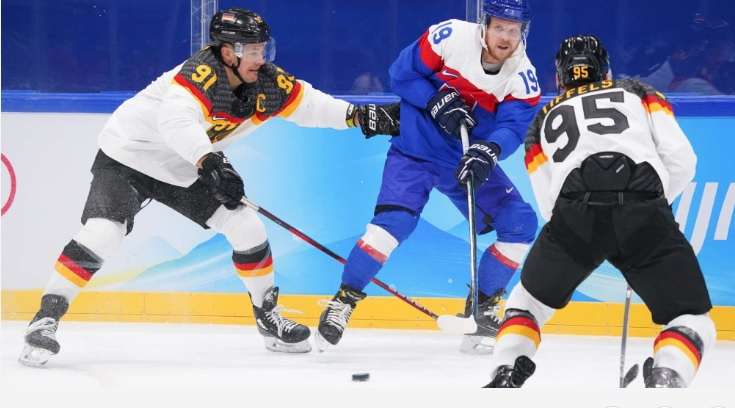 Slovakia got goals from four different sources and two points each from Marek Hrivik, Peter Cehlarik and Martin Gernat to beat Germany 4-0 in the Qualification Round of the 2022 Winter Olympics in Beijing.

“I think that’s one of the best 60-minutes games that I’ve ever coached,” said Slovak coach Craig Ramsay. “I think we put a lot of pressure on them with our speed and didn’t allow them to be as physical as they normally are, because they’re so strong and they get on you but tonight, our speed gave us a little bit of an advantage.”

“Of course we’re disappointed. We couldn’t really find our game and Slovakia deserved to win today,” said German forward Tom Kunhackl. “They played very aggressive all over the ice – on the forecheck, in the D zone – they were hard on us, they won more battles and that’s how you win hockey games. We just didn’t do it consistently enough throughout the game.”

With the win, Slovakia moves on to meet the USA in tomorrow’s quarter-final. It marks the Slovaks’ first appearance among the elite eight since 2010, when they finished fourth. For the Germans, there will be no repeat of their silver-medal performance from 2018.

Playing for the third time in these Games, Patrik Rybar made 21 saves, becoming the first Slovak goalie to post a shutout at the Olympics since Jaroslav Halak in 2010 in Vancouver. Rybar’s 0.76 goals-against average and 96.49 save percentage both lead all goalies in the tournament. Playing his third game for Germany, Mathias Niederberger stopped 29 of 32.

“It’s very nice that it came in this important game, but I have to give credit to the guys for playing well defensively, blocking shots and playing structured,” Rybar said of the shutout. As for his own progression during the tournament, he said: “The KHL shut down in January and it was hard to prepare, but now I’m feeling more comfortable after an exhibition game and three more in the Olympics.”

This game was a match-up between the eighth- and ninth-ranked teams after the group stage, with both teams finishing third in their respective groups. Slovakia lost its first two Group C games with losses to Finland and Sweden before finishing up with a 5-2 win over Latvia. Germany had losses to Canada and the USA sandwiched around a 3-2 victory over host China in Group A.

Slovakia’s Peter Zuzin had the game’s first good chance less than five minutes in but Niederberger denied him with a pad save from point blank. Germany only had five shots on goal in the first period but Nicolas Krammer had two of them, and they were both good chances that Rybar had to be sharp on.

Slovakia got a lucky bounce on the opening goal. Just past the 11-minute mark, Libor Hudacek took a pass from Kristian Pospisil and took a low wrist shot through a crowd. The puck hit the skate of German defenceman Jonas Muller and bounced through the legs of Niederberger, who was moving the wrong way. The puck slowly dribbled to the goal line, with Pospisil arriving on the scene to make sure it went in, taking a whack at the puck after it had already crossed the line, making it Hudacek’s goal.

The Slovaks were the faster of the two teams in the first period and really used that to their advantage in the second and took control of the game with two goals 1:44 apart.

The 2-0 goal came at 27:01 with teams skating 4-on-4, with Cehlarik taking a pass from Hrivik, then perfectly working a give-and-go with Gernat to get Niederberger moving laterally and beat him five-hole. Then it was 19-year-old Samuel Knazko with a nice pass to set up a Michal Kristof one-timer.

“It was 4-on-4 with more space on the ice. Hrivik was really good on the forecheck there. He won the puck back and we had time to make the play there with ‘Gery’,” Cehlarik said about his goal.

“It was big to extend the lead. I think in the second period we controlled the game well. We can still work on our power play – it could be better – but our PK was huge today and our goalie played well.”

They kept coming and could have had more. Juraj Slavkovsky has four goals so far and almost got his first assist when he tried to make a backdoor pass to Hrivik on a rush but the Slovak captain backhanded it just wide of the post.

Germany’s chance to get back into it was a pair of power plays early in the third period, but Rybar and Slovakia’s penalty-killing were equal to the task. Niederberger did all he could to keep his team alive, stopping Pavol Regenda on a clear-cut breakaway with just over six minutes to play, then a few more shots on power play with Slovakia looking for the knock-out punch.

“We just couldn’t find our game on the small ice throughout the whole tournament,” said German defenceman Korbinian Holzer. “The only game were we kind of played north-south hockey was against the US, where we really created some offence and put them on their heels. Today was just different again. We couldn’t play up to our strengths. We gave up some easy goals, we didn’t get enough shots, we didn’t put enough pressure on their D, and that cost us. At the end of the day, we’re going home and it’s deserved.”

With Germany back at full strength, coach Toni Soderholm pulled Niederberger for a sixth attacker with around four minutes to go, but that just resulted in Hrivik’s empty-netter with 2:04 to play. After an altercation led to the expulsion of David Wolf, the Slovaks played the rest of the game on the power play and was easily able to preserve Rybar’s shutout and the win to put them in the quarters.

“Today was a great team game for us,” said forward Marko Dano. “Everybody was doing their job. Our goalie played well and we helped him a lot. With every game we’ve played better, and hopefully tomorrow we can play as a team again.

Looking ahead to the USA tomorrow, Dano said: “They have a young team as well and they’re good skaters, but we’ve just got to play our game, keep it simple, gets some shots to the net and play a responsible game.”